Midtown Memphis is a collection of neighborhoods. There's Central Gardens, Cooper-Young, Overton Square, Annesdale-Snowden, the Broad Avenue Arts District, etc. I live in a little historic district called Evergreen. It's one of the oldest neighborhoods in the city. But the state threatened to split the community with an interstate back in the 1970s, and some of the old homes were torn down. The citizens rose up and fought the plan. And they won! New homes that were built to look like old houses went up in their place, and those are dispersed throughout the neighborhood. I live in one of the new homes.

It's a cute little area — close to Overton Park (the BEST park in the city), the Sears Crosstown building (the BEST abandoned warehouse ever), and the V&E Greenline (the BEST greenline in the city). Yes, I'm a little biased. But we don't have much in the way of businesses. It's mostly residential. But there's this cute little strip of shops along Overton Park Avenue, and when I saw that a new restaurant had opened there, I had to check it out. I was just hoping that it would be vegan-friendly.

It's called Evergreen Grill, and it's located in an old pizza joint. Luckily, when I checked the menu online, I saw several items that sounded pretty vegan. So my co-worker Hannah and I went there for lunch. The place serves mostly Italian food, but it's not limited to that.

We started with the Bruschetta. The menu didn't say anything about cheese, but when we asked the server, she confirmed that it did have cheese on top. So we asked to have that left off. Unfortunately, they forgot and added cheese anyway. We had to send it back and make sure they understood what vegan meant. Here's what we ended up with: 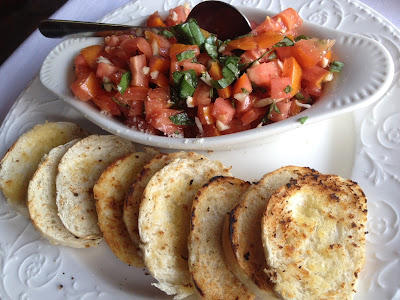 Now, sending things back is annoying, for sure. But it was so worth the wait. This has to be the best bruschetta I've ever put in my mouth. There is so much garlic in the tomatoes, and they were so juicy, fresh, and flavorful.

For my entree, I opted for the Roasted Vegetable Sandwich with Roasted Asparagus: 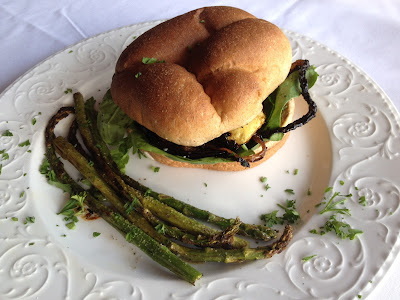 Tasty. The veggies were squash, mushrooms, and onions, and the whole wheat bun was spread with avocado. The asparagus was delicious, but I'm a big eater, and I could have used a bigger portion.

Hannah ordered the Spaghetti with Marinara: 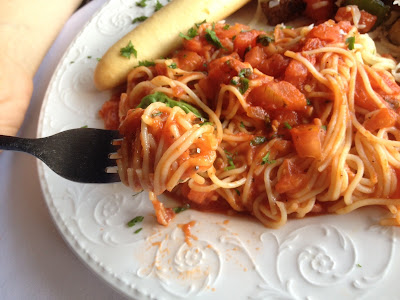 I tried a bite, and it was pretty yummy. We didn't inquire as to the vegan-ness of the pasta though, but it doesn't seem like the kind of place that would have fresh pasta. However, I would ask before ordering that for myself.

On the side, she got an order of Roasted Potatoes, which also accidentally arrived topped with cheese. But she sent them back, and the new ones were perfect. Crisp and coated in olive oil: 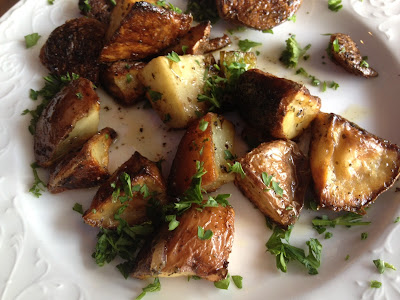 Evergreen Grill was nice. I like knowing that I can get vegan Italian food in the neighborhood. Plus, I love that they have a roasted veggie sandwich (with avocado!) on the menu. But the one thing truly worth returning for again and again is that bruschetta!

By the way, Hannah is our food writer at the newspaper we write for, the Memphis Flyer. You can read her story about Evergreen Grill here.

oh my that looks wonderful! that bruschetta was definitely worth the wait! yum!

Interesting that you had to send two items back. Your order looked good but I agree that the asparagus seemed a bit sparse.

I really enjoy hearing about other cities in other towns, so this was a cool read. Totally frustrating that you had to send two things back but I'm glad you enjoyed them.
maybe if you go back often enough they'll start to understand VEGAN.