In case ya haven't heard, Pecha Kucha (it's Japanese, pronounced pe-chu-ka-cha) nights are a national public speaking trend sweeping the nation. It was started in 2003 by a Japanese architecture firm as a way for artists to concisely present their work — explain your stuff in 20 slides with 20 seconds to speak for each slide.

The trend has made its way to Memphis, but the topics now range from art and food to bike lanes and farming. Any topic is welcome, and anyone is accepted. Crosstown Arts (my neighborhoods arts org) asked me to do a presentation on my Cookin' Crunk cookbook tonight at their third Pecha Kucha night, which was held tonight at their office.

Here I am introducing my blog: 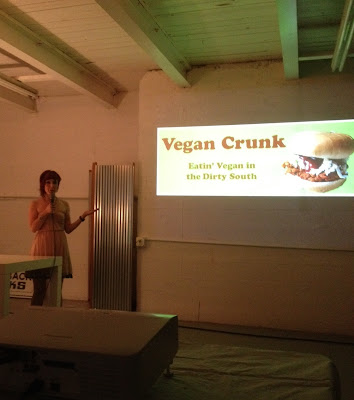 I had 20 seconds to explain each slide featuring a dish from my cookbook. Here, I'm describing my BBQ Black-Eyed Pea Burger: 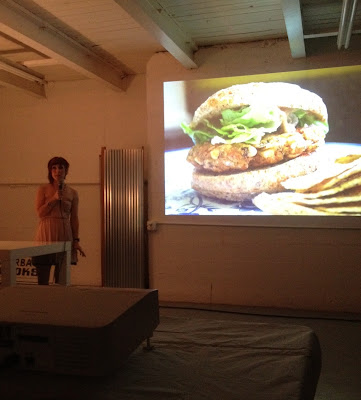 Out of seven speakers tonight, two spoke on vegan topics! Also featured was Balewa, Memphis' raw vegan burger guru. Plus, the food at tonight's event was all raw vegan salads prepared by Balewa! I wish I'd taken a picture, but I accidentally scarfed that shit down. I was hungry!

Since we're talking Cookin' Crunk, I might as well share with you what I had for breakfast. This morning, I made the Brown Sugar Baked Tofu Ham with Red-Eye Gravy and Whole Wheat Buttermilk Biscuits from my book. 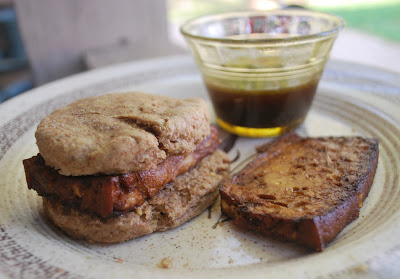 Red-eye gravy is amazing! It's typically made with bacon fat and coffee, but that's disgusting. My version is just coffee, olive oil, and a little reserved marinade from the tofu ham. Dipping the biscuit in the red-eye gravy is a MUST!
Posted by Bianca at 11:38 PM

That's a pretty cool idea, glad to know that you got the word out on making some great vegan food. :)

Your alternative on the red-eye gravy sounds much better by the way!

Wow that biscuit ham sandwich with gravy sounds ridiculous!! I wish I had that for breakfast, totally beats my banana and almond butter.

way to go on your presentation! and wow what a breakfast! yum!

"It's typically made with bacon fat and coffee, but that's disgusting."

You're so funny! And right.

That's so great that you got to do a presentation AND that there was another vegan in the crew! That breakfast sounds great, I LOVE biscuits!

What a cool concept!

You have a cookbook coming out?! That is so exciting! I can't wait to own it, and make that tofu-ham and gravy recipe. <3