First, a few Cookin' Crunk updates (or shall we call them "crunk-dates"?):

* Wanna win a copy of Cookin' Crunk? If you haven't bought one yet, then here's your chance to score one for free! Allison of Allison's Gourmet is giving away a copy to one lucky reader of her blog. All you have to do is click through and leave a comment. Just one. So what are you waiting for?

* It may seem a little conflict-of-interesti-sh, but Cookin' Crunk was featured on Hungry Memphis, the food blog for the newspaper I work for (The Memphis Flyer). Click here to read about some dishes from the book and my feelings on Memphis' ridiculous "heritage pork" foodie glutton-fest (a.k.a. pig murder fest), Cochon 555.

* And finally, if you want to buy a signed copy of Cookin' Crunk (and you live in the U.S.), just hit that new PayPal button on the right side of this page. If you're not in the U.S., shoot me an email and we'll figure out shipping costs just for you!


Okay, now on to today's post. This morning, my friend Greg and I woke up early and headed to the Buddhist temple — Quan Am Monestary — for an interesting twist on the traditional bake sale. Members of the temple were selling authentic Vietnamese food (some savory dishes and some sweet treats) to raise money for their temple.

Neither of us had been to the temple before. It's pretty far away from our Midtown homes, but after a 20 minute drive through some rather rundown neighborhoods in Hickory Hill, we arrived at our destination — a gleaming, massive temple that seemed out of place in an otherwise abandoned part of Memphis. As we walked onto the grounds, we were greeted by this lovely statue of Quan Yin surrounded by a pair of protective foo dogs: 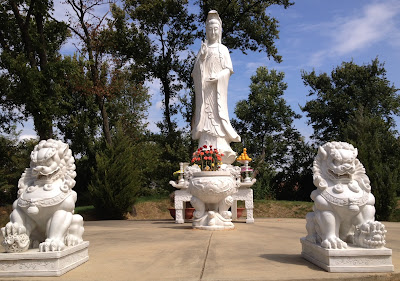 The sale was at the back of the temple grounds, so we also passed this serene water garden and koi pond on the way: 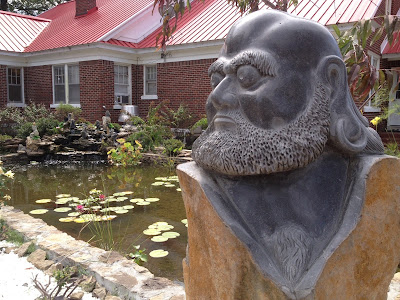 After admiring the water garden for a bit, we arrived at the sale. Even at 10:15 a.m., the place was bustling. Ladies and a few men stood at tables piled high with pre-packaged Vietnamese dishes. Nothing was labeled, and many of the sellers didn't speak English. We couldn't tell what most dishes were, but we had heard that all the dishes for sale were supposed to be vegetarian. However, I'm pretty sure I saw one booth selling something meaty-looking wrapped around a bone. 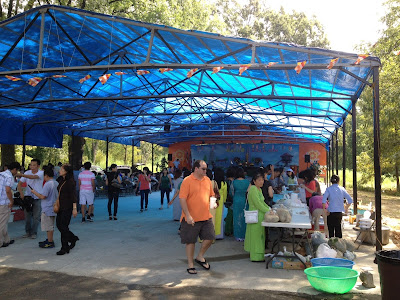 Anyway, when I recognized tofu, I knew I was in the safety zone. The woman manning this booth spoke a little English, and once she informed us that this was Lemongrass Tofu, we shelled out $5 each for our own packages. 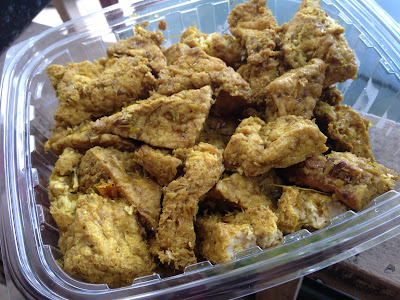 Wow! This fried tofu is so flavorful. I've eaten a lot of lemongrass tofu in my day, and this was among the best. When I got home, I sauteed some red and green bell peppers and onions and added those along with some brown rice. There had to be at least a pound of tofu stuffed into this box!

Next, we ventured over into an area that looked to have some sort of dumpling. A teenage girl was helping her mother pack dumplings into plastic containers, and we figured she probably spoke English since she was young and likely in school here. Greg asked her what was in the dumplings, and she smiled and said, "Um, I don't really know." He asked her if they were vegetarian, and she confirmed they were. So we each bought a package of the Mystery Dumplings with a Sweet-and-Sour Carrot-Daikon Sauce: 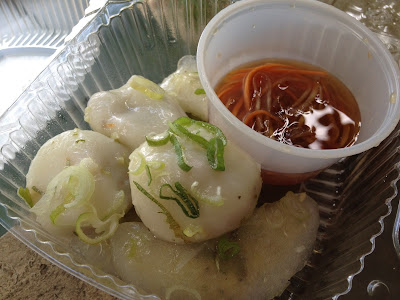 There were round dumplings and half-moon-shaped ones, and the outside was made from some kind of glutenous flour or rice. I love that sticky, chewy dumpling texture, and these were perfect. After biting into a few, we determined the round ones were stuffed with carrots and mushrooms and the half moon ones had some sort of potato mixture (maybe?). It's still sort of a mystery, but they were delicious nonetheless.

That's all we bought. I was tempted to try a sweet dish, but since I knew I wouldn't be able to confirm whether the desserts had dairy, I figured it was safer to skip the sweets. One table was selling bubble tea, but sadly, it appeared to have milk in it. But that's okay! The food we did purchase was enough to last for at least two meals.
Posted by Bianca at 10:45 PM

Hi Bianca! How are you? I thought that I would come and visit you and see all of your new yummy little items :) Lemongrass tofu sounds amazing! I would love to eat some right now.

I've being so busy that couldn't come here before to ay how excited I am about your book! Can't wait to have it!!

Hey there! Not a conflict of interest at all about your paper covering your book! The New York Times covers their reporters new books! I came across the interview Saturday when I was doing my "weekly vegan news gathering" and shared it with my readers on my blog yesterday!

As a Buddhist, I love the idea of a Buddhist Bake Sale! I'm going to have to look into that!

I didn't spot the meat. I did walk away with a renewed sense of why I love this city; Memphis has a way of constantly surprising you. For example, finding a thriving, vibrant Buddhist community in a forgotten corner of the city. It's truly one of the most beautiful spots in the entire city. More pics: http://chubbyvegetarian.blogspot.com/2012/08/photos-from-quan-am-buddhist-temple.html

wow that water garden is beautiful! i could definitely spend some relaxing time there!

The garden looks beautiful.
It can be pretty confusing to maneuver food without speaking the same languages - sometimes even people who speak the same language just don't understand terminology -but it looks like you managed some safe finds.
The dumpling sauce sounds great.
Give my good wishes to Paul!

We have a temple here that serves some really good stuff (although nothing as good as that Lemongrass Tofu looks...wow!).