For the past week, I've been eating as many meals as possible from my freezer. Before the week began, my freezer was crammed full of veggie burgers, vegan ice cream, frozen dinners, and individual portions of leftovers. I'm proud to say I've done a pretty good job of clearing out the old icebox. It's not empty by any means, but what's left has a little breathing room.

Here are a few meals that I've made from my freezer over the past few days. On Thursday, I made a Kung Pao Stir-Fry using my last package of Vegetarian Plus Vegan Kung Pao Chicken and some frozen stir-fry veggies from Kroger: 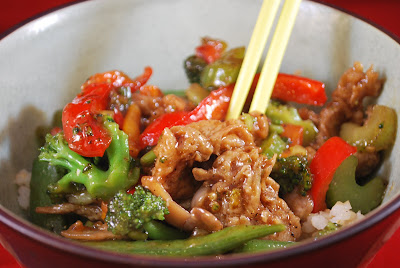 Not too shabby for a freezer meal, huh? The vegan chicken is a soy-based faux meat that was sent to me for review back in October. But since they sent me two boxes of the same thing, I still had one left.

On Friday, I made Spaghetti with Vegan Meat Sauce using some leftover frozen homemade marinara sauce, a half-empty package of Boca Ground Crumbles, and a mostly empty package of Morningstar Farms Crumbles: 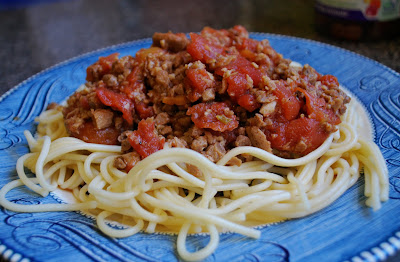 Granted, there was more "meat" than sauce, but I'm okay with that. A girl's gotta get her protein, right?

On Saturday, I made a Chicken Quesadilla using one lone frozen Food For Life Brown Rice Tortilla, a Boca Chick'n Patty, and some Daiya cheddar (not from the freezer): 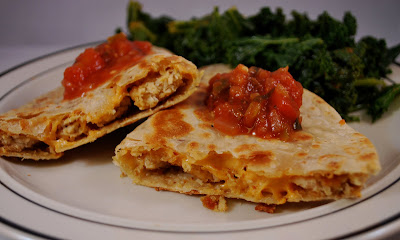 Served alongside some Mexican-spiced kale seasoned with cumin, chili powder, garlic, and onion power, this was an excellent way to start a Saturday night. I only wish I had more frozen tortillas so I could use my last Boca Chick'n patty for another one!

I considered sharing an "after" picture of my cleaned-out freezer, but it still looks pretty cramped to the naked eye. You guys probably wouldn't believe that I'd eaten too much out of it if I showed you. But trust me. It's an improvement. Before, the freezer was packed so full, you couldn't move things around to find the stuff lurking in the back. Now, I can easily locate that ages-old package of puff pastry that's pushed to the back of freezer. Not that I need it for anything, and it's probably freezer burnt anyway. Guess I have a little more cleaning to do.
Posted by Bianca at 9:18 PM

Haha, first of all, I love yr "Leave a comment" message - I never noticed that before. Secondly, nice job! I'm seeing lots of quesadillas lately that look really delicious as well as super easy to throw together. I was looking at my fridge today and menu planning and getting really excited about how to piece together what was in the fridge to make a meal. I get so stoked to get rid of things so I completely understand yr enthusiasm over cleaning the freezer out! Nice job.

good work :) i'm eating down my freezer/caning cupboard / dry goods cupboard / old emergency stash that needs to be rotated due to a massive upcoming tax snafu payment. it's fun, though sometimes what i come up with it pretty... interesting.

I'm even more hungry looking at those meals. Dinner be done already!

All of that looks sooo good. Especially the stir fry!

You've totally motivated me to take on a similar project. Maybe I'll blog a few of my best freezer-finds ;)

Girl, you rock that freezer.