The Owls Are Not What They Seem 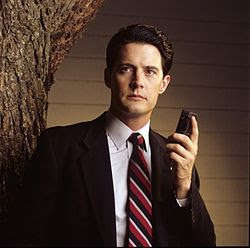 For the past couple of months, I've had a new crush — FBI Special Agent Dale Cooper. That's right. I'm takin' it back to the old school, Twin Peaks-style.

My friend Shara has been hosting Twin Peaks girl's night every Thursday. We gather at her house and watch two episodes of the David Lynch-directed cult classic. I missed out on the show when it first aired in 1991. I was 11 then, and I remember the show's opening theme. But that's about it. I'm guessing that opening theme was my cue to turn the channel because I'm sure I would have found the show to be weird and boring back then.

But now I love it! A dancing little person, a foreboding giant, a scandalous strip club, and creepy old Bob. Yes, please. "The owls are not what they seem" is a catchphrase I'll be using for life. We finished the series last Thursday, and of course we had to celebrate with a cherry pie Norma would be proud to serve at the Double R Diner. This is Isa and Terry's She's My Cherry Pie from Vegan Pie in the Sky: 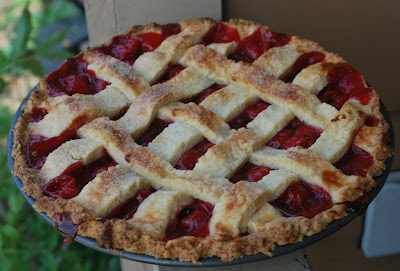 And you can't have delicious pie without a cup of damn, fine coffee. Shara made us almond milk lattes in her new espresso machine: 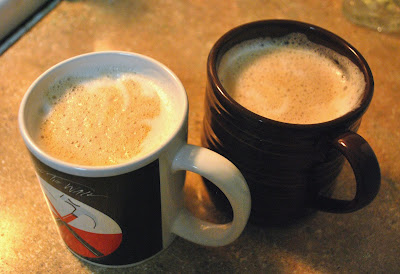 Next Thursday, we're watching Fire Walk With Me, the 1992 prologue film to the Twin Peaks series. And then, we're on to the next series. Since we started girl's show night, we've watched The O.C., True Blood, Breaking Bad, and now Twin Peaks. Not sure what's next, but I doubt it will be as crazy as Twin Peaks. And I doubt it will feature any character as hot as Agent Cooper.
Posted by Bianca at 8:59 PM

I LOVE him on Portlandia! I am thinking of trying out Twin Peaks, but so far I haven't liked any of David Lynch's movies (I tried..) and I LOVE weird shit! lol p.s. how do you like Breaking Bad, it seems like something I'd watch

there is an episode of "psych" called "dual spires" that is a twin peaks spin off - it is soooo good. a lot of the actors are in it and they do a ton of really witty references - check it out before you switch shows!

I was never able to fully get into twin peaks, but I will always be interested in pie & coffee.

Ahhh I love Twin Peaks! I wish there were more episodes to watch! Although I haven't seen Fire Walk With me, maybe I should. But yes, like Alpha Blonde said - he's the mayor in Portlandia and still smokin hot.

I love Twin Peaks AND cherry pie! We watched all of twin peaks last year. Maybe move onto x-files? It's weird and addictive. Oh yeah, I've seen that Pysch episode too and I was so happy that I got all of the Twin Peaks refences!

Yep, I caught that Psych episode by accident last weekend. There was a Psych marathon on Ion, and I was, like, whoa, that's Bobby Briggs! And that's Leland! And there's a stack of donuts! And a bird! And look, it's Audrey Horne!

My husband and I love Twin Peaks and everything David Lynch.
We were with another couple in a bar in New Orleans a few years back, it was dark, with vinyl red booths and a girl dancing with a patch over her eye. We all looked at each other and said how it reminded us of a David Lynch film. hee hee.

I'm stuck at that point between season one and season two! I've been so busy that I don't get any TV time. :(

I love David Lynch though, anything and everything!