Memphians are pretty damn serious about barbecue. We have a World Championship Barbecue Contest (I call it Pig Murder Fest) every May. And you can't drive more than five miles without running into a diner-style 'cue joint. But as a vegan, I can say with pride that I've only been to one of those barbecue shacks (because that one — Central BBQ — serves up a barbecue portabella mushroom sandwich).

However, there must be something in the air down here because, like most Memphians, I agree that everything tastes better smothered with a vinegar-heavy, slightly-sweet 'cue sauce. That's why I knew I must try Brian Patton's Barbecue Ribz with Smoky Elbows and Cheeze from the Sexy Vegan Cookbook: 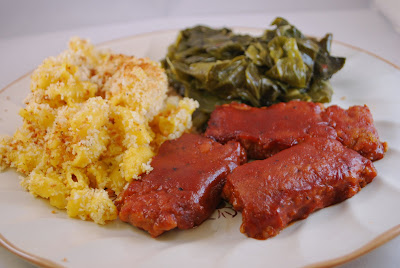 These seitan ribs are marinated in what Brian calls Crazy Shit Vinegar, a homemade seasoned vinegar made with sugar and marinated peppers, onions, and carrots. That Crazy Shit is delicious! And it adds an awesome, complex flavor. After the ribs are marinated, they're baked in barbecue sauce. I used a bottled sauce instead of the homemade version Brian suggests because this was a really time-consuming recipe (a hour of baking the seitan, an hour of marinating the seitan, and 20 more minutes of baking). But it was still finger-lickin' good.

My seitan was a little softer than I would have liked (a few ribs fell apart), but I think that's my fault for using too much veggie broth in an early step in the recipe. Soft or not, the ribs were awesome.

The recipe for Smoky Elbows & Cheese is included on the same page as the ribs and it's no wonder. They're the perfect pair. The baked, breadcrumb-topped macaroni (I used quinoa elbow pasta) is mixed with Brian's homemade Smoky Cheddar Cheeze sauce. It's a cashew-based cheese with a hint of Liquid Smoke, and it's kind of impossible to stay out of. I probably ate a fourth-cup of this stuff with a spoon out of the food processor. Oops. I'll be making this again to top steamed veggies or to use as a dip for crackers.

Also, on the side, I made some of my own recipe for Collard Greens (the recipe will be in my cookbook).

The verdict? The Sexy Vegan ribs and macaroni get a double thumbs-up from this Memphian.
Posted by Bianca at 10:48 PM

This looks like the meal of my dreams! Love breadcrumbs on mac and cheese. You have really sold me on this cookbook!

I need that cookbook! I have been you-tubing his show all morning! I can't stop laughing he is so funny!

That cookbook really sounds amazing. Could you tell me if the recipes are generally a little healthy and if they call for a lot of store-bought ingredients like vegan cheese, sour cream, cream cheese, sausages, etc.? Thanks!

This book is sounding better and better! I need to check it out! That plate of food looks Ah-mazing!

My first thought was, "Nom nom nom." That food looks amazing. I'm going to add that cookbook to my wishlist.

That mac and cheese looks sooooo good! I agree with everyone, this cookbook sounds great!

Seitan is (hands down) my favorite of the faux meats- there's nothing you can't make with it! And these ribz look sooo good!

I love this cookbook. So funny! I've made the Real Man Quiche and the Southwest Coleslaw. Both were really good. My favorite recipe name is the Caesar salad called "Et tu, Tempeh?" Cracks me up.

First, pig murder fest is classic. Second there is a joint that actually serves a vegetarian dish? Score.