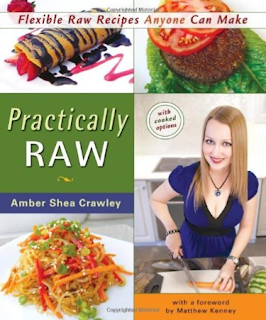 I met a lot of awesome people at Vida Vegan Con last August, but with so much going on (workshops, panels, outings to Voodoo Donuts, boozin' at the Bye & Bye), there wasn't much time to bond with many of the bloggers I was so excited to meet.

But I actually did get to spend more quality time with a handful of bloggers. We formed a loose posse and stuck together when traveling around Portland. One of those bloggers was Amber Shea Ford (soon-to-be Amber Shea Crawley) of Almost Vegan and her partner Matt Crawley. We karaoked together (Matt does a bad-ass Billy Idol). We stuffed ourselves with late-night seitan sandwiches at Upton's Naturals pop-up shop at Food Fight. We even rode to the airport together to catch our respective return flights home. By the end of the weekend, we had inside jokes ("it's time for the percolator!") and lots of amazing memories.

Amber just so happens to be an awesome raw chef, and her new book, Practically Raw, just hit stands. I was offered a review copy, and I enthusiastiscally said, "Yes, please!" I promised myself I'd be eating more raw foods after my January cleanse, but lately, the only raw food I've been eating has been side salads. That's mostly because I've had cookbook after cookbook to review over the past couple of months. And none of them have been raw until Amber's book. Perfect timing!

Many of Amber's recipes have cooked and raw options, and a lot of them (but certainly not all) even have a dehydrator option. I'm always looking for new excuses to dust off my Excalibur, so I chose to start with these Mushroom-Walnut Burgers: 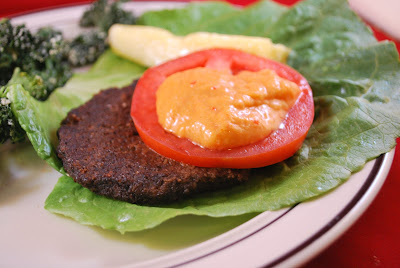 Don't these patties look totally meat-like? The burgers have that hearty, meaty flavor that mushrooms lend, and the walnuts mean they're packed with omega-3's. I stuffed my burger into a romaine leaf and topped it with a little Nacheez spread.

Probably the best thing about Practically Raw is that there's a WHOLE CHAPTER dedicated to kale chips! A whole freakin' chapter! There's also an entire hummus chapter, but I'll have to get to that later. I couldn't wait to bite into these Sour Cream & Onion Kale Chips: 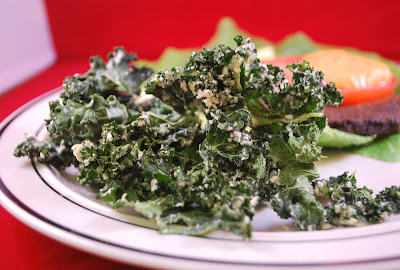 I also explored the salad chapter and found a neat recipe for Matt's Salad Sprinkle, a salad topping that Amber's partner Matt loves on his salads. It's made from nutritional yeast, hempseeds, and dulse flakes, and it was the perfect topper for this garden salad: 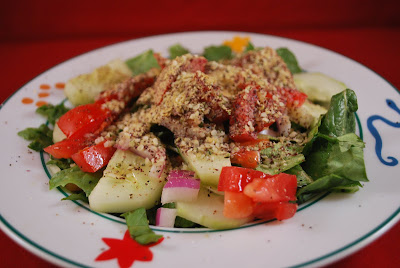 As soon as I get caught up with the rest of my pending cookbook reviews, I'm going to dive into this book full force. I love Amber's taste (and the full-color photos!). She's veganized and raw-icized everything from cheese balls and flapjacks to korma masala and Southern-style biscuits & gravy. Oh, and the dessert section is drool-worthy! Raw sugared donut holes, anybody? Or chocolate almond butter cookies? I'll have both, thanks.
Posted by Bianca at 11:30 PM

I'm so glad you reviewed this book; I've been curious about it. A whole section dedicated to kale chips sounds fabulous!

Hurrah for Amber and her unstoppable magnificence! Thank you for giving a bit of a sneak peek. I'm holding out for an autographed copy from the lady herself later this year but, by golly, it's hard to be patient...

My Amazon wish list is continuing to grow thanks to all of your amazing book reviews! This book seems absolutely perfect for me since I've been trying to eat mostly raw. A whole section on kale chips?! That sounds amazing! Sour cream and onion sounds like the perfect choice to test out :)

Thanks for the great review! I'm heading to amazon right now!

This book looks great. I'm very curious about the sour cream and onion kale chips. These were my favorite flavor in my pregan days and I've never seen a vegan version... the closest I've come to it is by dipping plain chips into the Lima Crema sauce from the Veganomicon Tempeh Tacos recipe. It was pretty damn good.

And I could certainly benefit from Amber's tips on making kale chips. I've never been very good at it. And store-bought kale chips are so expensive around here.

Yay! I'm so glad you got a review copy, and I'm even more glad that you're enjoying the recipes so far. Can't wait to see you in September! ;)

PS - I almost forgot about the Percolator! Ahaha! Oh HEY - what was that thing that Matt said at the gas station that ended up being so hilarious? Like he said something that he didn't intend to be funny, and then I replied with something that made what he said sound funny...we're wracking our brains trying to remember, but neither of us can recall - help!

PS - I just saw your review on Amazon! THANK YOU! I shall repay you in kind when your own book comes out. :D

Why haven't I ordered Amber's book yet?! Everything you made looks amazing.