Vegan Food From a Dude

I want to hang out with vegan cookbook author Brian L. Patton. I've always been one of those girls who'd rather hang out with the dudes than a bunch of ladies. We could play video games, drink beer out of 40s, and laugh when somebody farts. Of course, I don't know if Brian would really be into that. But that's the vibe I get from his new cookbook, The Sexy Vegan Cookbook: Extraordinary Food from an Ordinary Dude.

Take for example his recipe for tempeh-walnut meatballs. They're just titled "My Balls." The intro for the recipe is even funnier: "Here they are! For the whole planet to behold ... My Balls!" Since Brian is the executive chef at the Vegin' Out vegan food delivery service in L.A., the book is loaded with delicious recipes, but I couldn't resist trying this one first. Mainly because I wanted to say "balls." 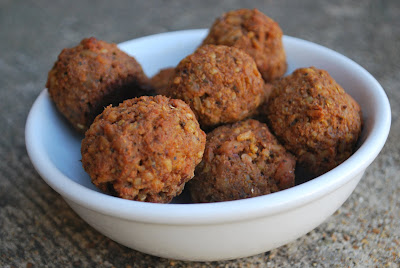 Look at those balls! They were meaty and delicious. There's lot of Italian herbs, walnuts, nutritional yeast, and tomato paste mixed in the crumbled tempeh. I loved how firm the balls were (tee hee) after baking. Many vegan meatball recipes I've tried have come out soft and crumbly.

These would be excellent on top of spaghetti, but I piled mine on a Meatball Sub with Daiya Cheddar and a side of Colcannon (from the Happy Herbivore 2012 calendar): 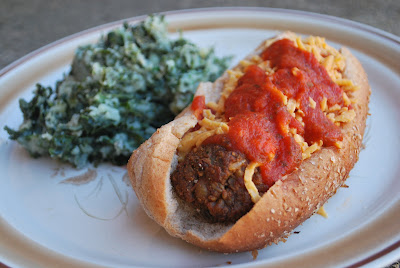 The Sexy Vegan is loaded with dude humor, which is really the best kind. I'm from the Beavis & Butthead generation, after all. I've laughed out loud at titles like the S.I.L.F. (you know, "sandwich I'd like to ..."; it's a hummus sandwich), The Fat Ass (a sandwich piled high with tempeh bacon, seitan, and avocado), Hangover Hash (a potato hash with quinoa and sausage), and The Girlfriend's Favorite Salad That She Constantly Asks Me to Make and Won't Shut the Hell Up About (a simple salad with chickpeas and hearts of palm).

Plus, Brian's intros for each recipe are hilarious too. And there are little glossary entries called "WTF?" peppered throughout the book. For example, there's a "WTF is nutritional yeast?" and a "WTF is wakame?" Oh, and there's a whole chapter of cocktails. I'm making the Bloodbath this weekend (a Bloody Mary with adobo sauce!) and the Dirty Dudetini (gin, vermouth, and Brian's homemade Crazy Shit Vinegar) is on my to-make list.

Here they are! For the whole planet to behold...My Balls! You can place them atop a pile of spaghetti or line them up in a hoagie roll, smother them with tomato sauce and your favorite vegan cheese, and bake for a killer ball-parm sando.

1 tablespoon extra-virgin olive oil, plus more to lube the
baking sheet and coat the balls


Preheat the oven to 350°F. Using a steamer basket, steam the tempeh for 25 minutes to soften it. Then let it cool. In a food processor, combine the walnuts, nutritional yeast, parsley, oregano, basil, thyme, garlic, onion, Worcestershire, tomato paste, tamari, water, and oil, and process until you have a semi-moist meal.

In a bowl, crumble the steamed tempeh with your hands until there are no big chunks left. Then add the mixture from the food processor to the bowl, plus a pinch of salt and a grind of pepper, and mash it all together with your hands. You will now be able to form this mass into little balls. Make them just a bit smaller than beer-pong balls (depending on when and where you went to college, you may know them as Ping-Pong balls), about 12 inches in diameter.

Lube up a baking sheet with the oil, lay the balls on it, coat them with a little more oil, and bake for 30 minutes. My balls are now ready for consumption.


Excerpted with permission from The Sexy Vegan Cookbook: Extraordinary Food from an Ordinary Dude ©2012 by Brian Patton. Published with permission of New World Library http://www.newworldlibrary.com
Posted by Bianca at 11:26 PM

Oh my god I used to LOVE meatball subs, I don't think I've ever veganized one... what a brilliant idea! This cookbook looks so great, I will have to add it to my ever growing list to buy when I come to the US.

Haha Jenny! I didn't even notice that when I made the recipe! I just made them the size of beer pong balls and didn't read the rest of the instructions. :-)

So many double entendres! Is it bad that I have the humour of a 12 year old boy? Because I find this kind of stuff hilarious.
Sounds like a pretty cool book.

Haha I'm so with you, I definitely prefer the company of dudes than ladies. Less drama I've found! This book sounds awesome and he definitely sounds like a person I'd want to hang out with! Those meatballs look awesome!

I don't know how I stumbled upon this entry, but I'm glad I did. If it's one thing I love it's some good firm balls. Seriously. My go-to vegballs are made from eggplant. They're delicious, but not as firm as I'd like. I'm definitely going to have to check out this book. In the meantime I'll try out this recipe. Thanks so much for sharing! :)

If these taste half as good cooked as they do "raw" they're going to be amazing. Thanks so much for posting the recipe. I'm making a red sauce that no (quarter) Sicilian would ever skip along with some organic linguini. Cheers!

I just got around to making these, and they're awesome! I'm reluctant to cover them with sauce, since they are so yummy on their own. I think I'll keep some on hand as a quick snack...and now I'll have to check out the book!

Just made the "dough" for these and it not only smells amazing it tastes amazing too! I cannot wait to taste them when they are done baking. The only adjustments I made were: doubling the recipe, adding some fennel seed, and adding some cut up sun dried tomatoes to the mix. Great recipe, great post! Thanks!