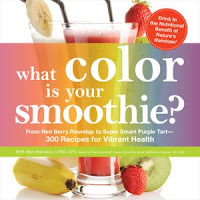 In my magical world, puppies poop glitter, luck dragons hang out with unicorns, and rainbows are made of different fruit-flavored smoothies that you can drink with a straw. Yea, I know I'm dreaming when it comes to sparkly dog crap (and I'll admit that luck dragons might not be real). But you really can make a rainbow of smoothies!

When I was offered a copy of What Color Is Your Smoothie? to review, I jumped at the chance. I often drink fruit smoothies before my daily workouts since I'm not that fond of eating fruit whole. But I tend to fall into smoothie ruts, and more often than not, I find myself drinking the same old banana-nut butter smoothie.

This book is filled with more than 300 smoothie recipes, all arranged in chapters by color. There's an orange chapter, a green chapter, a red chapter, a blue one, and several more. Most chapters feature a mix of fruit smoothies, like a traditional blueberry smoothie (blueberries and almond milk) or the crazy cauliflower-garlic smoothie (cauliflower, garlic, Greek yogurt). Most recipes are vegan, but some, like the above-mentioned savory smoothie call for dairy ingredients that are easy to sub (if you are lucky enough to live in a town where So Delicious' Greek-style coconut yogurt is sold ... I'm not).

First I tried the Blue Banana Berry Smoothie, made with blueberries, strawberries, blackberries, a banana, and kefir: 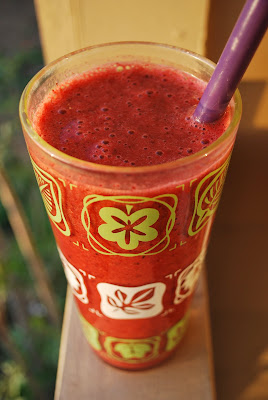 I chose this because I've been dying for an excuse to shell out $5 on a bottle of So Delicious Cultured Coconut Milk (a vegan version of kefir). I really enjoyed the yogurt flavor the kefir gave the smoothie. All of recipes in this book call for ice, but many non-Vitamix blenders (like mine) just don't do ice. So I substituted frozen fruit, and it worked just fine. 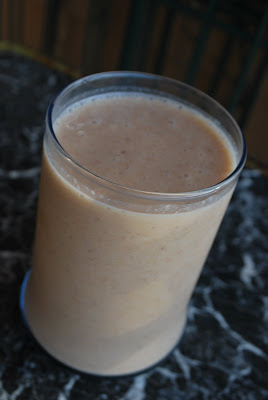 Wow! It tasted a lot like peach cobbler, thanks to the blended granola and the spices. This kept me full for my one-hour bike ride around town after work. And it has way less calories than real pie! Next time, I'll use a little less cloves. But other than that, perfect!

I know I'll be referencing this book in the warm spring and summer months ahead, when a mid-afternoon smoothie is the most refreshing treat imaginable before my workout. I might even get brave and venture into the world of savory smoothies. Blazing Broccoli Smoothie, anyone? (That's really in the book!)
Posted by Bianca at 10:35 PM

Ever since I started following the Crazy Sexy Diet principles more closely I've been really loving my breakfast smoothies, but like you I can get in a rut! This book looks so great and fun! Thanks so much for posting this, my amazing wishlist is growing because of all of the great book reviews you post! ;)

I miss smoothies! I developed a banana allergy which took me out of the smoothie game... but I need to get back in. I know there are plenty of other options!

I like your glittery rainbowy world!! Also - love smoothies!

Janna at Joy of Smoothies said...

About your comment that non Vita Mix blenders don't do ice....I have been making smoothies for years and years, and I don't have a Vita Mix. For awhile I've just been using the cheapest blender I could find at Target.

A tip for doing ice: add all the fruit and the liquid first. Start blending until it all comes together into a liquid goop. THEN add the ice, after it's already liquid.

This way you're adding ice to liquid instead of ice to solids+liquid. It makes a huge difference.

Best of luck and your post inspired me to add even more variety to my smoothies!