When I shared a picture of my overstuffed freezer a few days ago, a few commenters asked how I could hoard all that ice cream without gobbling it up right away. Well, I don't typically buy more than one pint at a time, but my freezer is currently stocked with free pints of the new So Delicious Almond Milk Ice Cream! 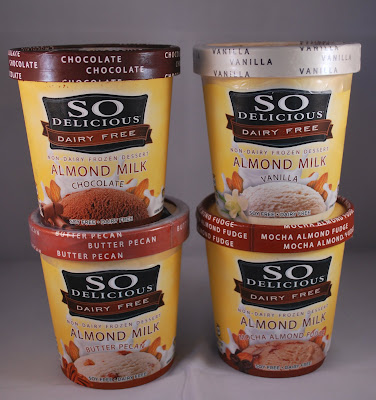 So Delicious (a Turtle Mountain brand) has been making their bomb-ass coconut milk ice cream for some time, but now they're branching out into the wonderful world of almond milk. When they asked me to review their new almond milks, I had no clue they were also sending lots and lots of ice cream. Two giant coolers packed with dry ice arrived at my office a few weeks ago. Best review samples ever! 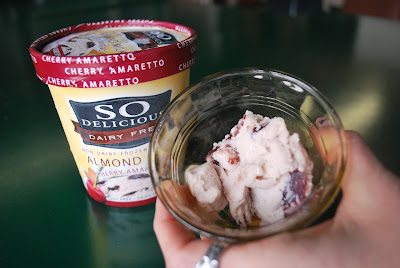 As part of the tough research, I had to sample each of these flavors. Being a blogger is hard work. I'm tellin' ya. After countless hours of examining the nuances of every flavor, I have to say, So Delicious has really outdone themselves. I love their coconut milk ice creams, but I do believe these are better. Maybe I just like almond milk better than coconut milk, but these seem a tad creamier. And less coconutty. Nothing wrong with coconut, but I appreciate the neutral flavor of the almond milk.

As if five pints weren't enough, So Delicious also sent me a box of their Almond Milk Mocha Almond Fudge Minis: 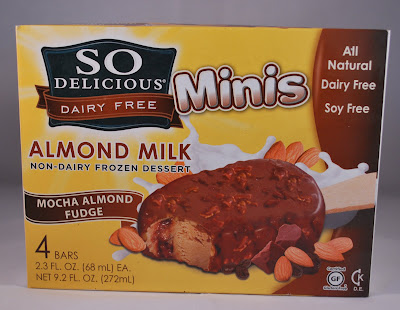 As much as I love eating ice cream in a bowl, I love it way more in nutty chocolate-covered bar-on-a-stick form. These bars are pure magic, folks. Pure magic.

But a girl cannot live on ice cream alone. So Delicious has also introduced a new line of almond milks: 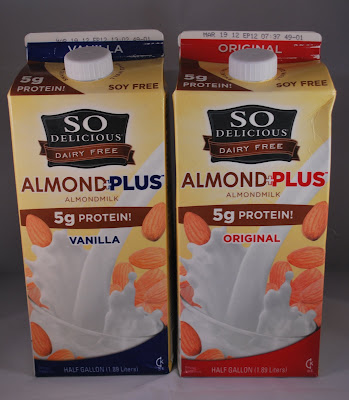 Both the vanilla and the original flavors were smooth and creamy with just the right amount of thickness. Dare I say this stuff is better than So Delicious' coconut milk? In fact, I believe this may be the best almond milk I've tried. And I've tried lots. It was definitely the perfect dipper for this vegan peanut butter chocolate chip cookie! 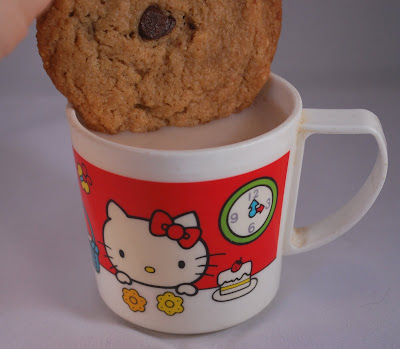 My only complaint with the milk is that it doesn't have much calcium. I prefer my plant milks fortified with at least 30 percent of the RDA for calcium. This milk has 10 percent of the RDA for calcium. But it does have five grams of protein per serving, and that's a plus. So if you see the new So Delicious almond milk products at a health food store near you, buy them. I promise it'll be worth your while.
Posted by Bianca at 12:09 AM

wow. just.... wow... I checked out the sight online as soon as I read this. The second I get back to NYC I am going to hunt down the cookies and cream almond milk ice cream. WOW. thanks for the heads up... I'm jealous that they send you all of this!! :)

I'm jealous here! I've tried the soy and coconut milk icecreams but not almond milk. I need to pick some up!

I love their coconut milk ice cream bars! i hope they make the bars in almond milk too. Maybe I will be able to show a little more self restraint. Pints just get demolished.

Thanks for the review! I'm so glad they are coming out with so many wonderful products. I'm glad you pointed out the calcium thing because I usually look for that too but I also alternate between my non-dairy milks so trading some calcium for protein here and there would work out fine ;)

I'm truly jealous! I can't wait to see those So Nice products around here, especially those sticks. I'm not such a big fan of the coconut products (because of the taste and the saturated fats), so these are sure to please me. Too bad the milk doesn't have much calcium though.

wow- i'm so excited for the new so delicious almond products! those ice cream bars look SO GOOD. and i'm the same way, i like my plant-based milks to contain at least 30% calcium.

Holy shit, did you say butter pecan? I'm in. MUST. TRY.

Major major jealousy happening here right now! That ice cream looks awesome and I'm all for trying new brands of almond millk. I tend to lean more toward almond milk products so this is great news :)

OHMYGOD. I am dying from jealousy. I want some of that cherry amaretto ice cream RIGHTNOW.

This is awesome news! I trust your almondy-judgment and will have to track all of these products down... definitely an almond milk kind of gal and theirs sounds delightful!

I tried the Coconut Bliss Cherry Amaretto last week. It is a good thing the price of these are so high because I would be eating way too much of them.

Hi Bianca! Thank you for the awesome review! We're thrilled that you are enjoying our new almond milk products! One note about the calcium in our Almond Plus: As the label indicates, a single serving provides 10% of the RDA of calcium. But more is not always better. In other words, if a fortified product contains more calcium, but isn't also balanced with the proper ratio of magnesium and vitamin D, the additional calcium is not being fully utilized. Our Almond Plus contains the proper balance of magnesium, calcium, and vitamin D for optimum calcium absorption, as well as five times the protein of other almond milks.

Yum yum! And I love your HK mug!

Say what!? I didn't think it could get better than their coconut milk ice creams - I mean, those are this shiz! Looks like I can add one more item to my grocery list this week.. Oh yes!

I'm still eating my way through my shipment... looking forward to reviewing though! I totally agree with you about the creaminess.

Wow those sound amazing. I've had their coconut milk ice cream - which isn't nearly as good as NadaMoo's, which is phenomenal - but I'll have to give this almond milk kind a try!