"Gluten-free seitan" sounds like a contradiction, huh? That's like saying, "gluten-free gluten." But enterprising vegans can come up with a substitute for anything!

When first flipping through my review copy of The Complete Idiot's Guide to Gluten-Free Vegan Cooking, I was immediately struck by the recipe for Chicken-Style Gluten-Free Seitan. I have no problem digesting gluten, but I knew this was a recipe that I must try. So I cooked a batch on Wednesday night: 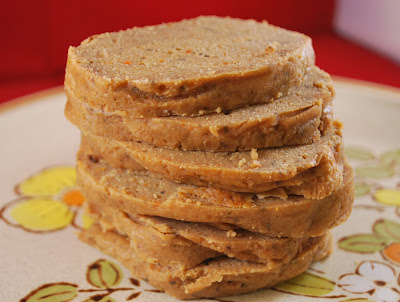 Doesn't it look just like regular seitan?! It's prepared in the same way too. A mixture of cooked and pureed veggies, a little tofu, and a combination of gluten-free flours (chickpea and brown rice) are mixed together and shaped into a log. Then it's wrapped in foil and steamed, similar to Terry Hope Romero's seitan in Viva Vegan.

Texture-wise, it's pretty spot-on after it's cooled in the fridge overnight, and it tastes similar to seitan too. I decided to use part of my gluten-free seitan in a pot of Mexicali Chili, also from The Complete Idiot's Guide to Gluten-Free Vegan Cooking: 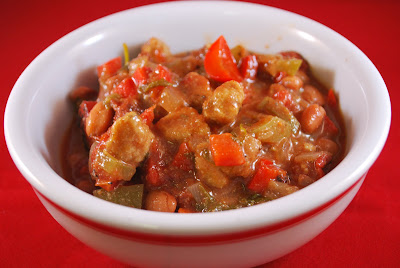 This chili is amazing! It's loaded with fire-roasted tomatoes, beans, seitan, peppers, and lots of spices. It even contains cocoa powder, which always steps chili up to the next level. I added a habanero pepper, and I also used the jalapeno and cayenne called for in the recipe. So my batch is pretty spicy, just the way a proper chili should be.

The seitan didn't hold it's texture in the chili as well as I'd hoped, but it was still a delicious addition. It seems like the gluten-free version gets a little gummy after it's simmered in the chili broth. It might be best to use the rest of my batch fried up in sandwiches or salads.

The Complete Idiot's Guide to Gluten-Free Vegan Cooking also has a recipe for gluten-free cornbread, but I didn't want to spend any more money on special gluten-free flours. I'm sure a gluten-free vegan would already have a good selection of alternative flours in their pantry, but not me. So I baked up a batch of my own recipe for Jalapeno-Corn Cornbread from my upcoming cookbook: 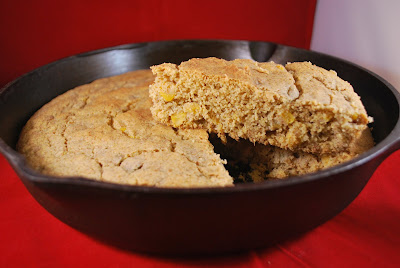 I guess eating a gluten-containing cornbread with a gluten-free chili is kinda silly. But it paired perfectly with this spicy, hearty chili.
Posted by Bianca at 10:54 PM

Hey cool! Like you, I have no problems with eating gluten, but I am aware that we eat a LOT of it, so gluten free seitan would be a nice alternative.

It does sound like a contradiction lol! But it looks amazing! I'm intrigued. I still will never think that gluten is unhealthy for anyone ( like I have been hearing from a lot of people lately) unless they are sensitive or allergic.

Is it possible to omit the tofu or it kind of the star of the show? I used to love seitan, but I am now soy-free!

Wow, this is amazing! I love me some gluten, but I'd also love to try this to see how the texture is different.

I love seitan, gluten and all, but I have to say I'm really intrigued by this! It looks incredible!

I've been curious about gluten-free gluten! So weird, yet kind of awesome.

Some people I know have trouble digesting seitan but not other types of wheat, so this is a good option. And no it's not silly to have some gluten-free with some gluten, limiting gluten just leads to less inflammation in the body.

Jenn, there are only 6 tablespoons of tofu in the recipe, so I bet it might still work if omitted. It'd be worth a try anyway.

And Daphne, since the recipe came from someone else's book, I wouldn't feel comfortable posting the recipe without permission. Some publishers do allow reviewers to post a sample recipe, so I can inquire if they'll allow that.

You just rocked my world a little bit. And that isn't easy to do! Seitan is one of the things I've missed the most since going gluten free...well other than bread. Must. Find. This. Book. Immediate! :)

My mind has officially been blown...

I love this blog! your recipes are great and tasty and full of colour and passion!

Use bean or lentil flour instead of tofu.I have also used a little refried beans straight of the can. Soy bean,Pinto.....

Gluten free seitan really DOES sound like a complete oxymoron.. but it looks so so amazing! Was it very time consuming?

J-Fur doesn't like all the gluten in seitan. These are a must try.

Gluten-free gluten! That is really interesting, I'd sure like to try it sometime. The texture does look pretty spot on.

Great post!!! I need gluten free stuff and being a vegan it's harder :P