My best friend Nathan celebrated his 32nd birthday Saturday night, but the festivities were bittersweet. You see, the birthday party was also a going-away party. Nathan's moving to North Carolina for a job in a week! We've been friends since I was in college, at least 11 years ago! 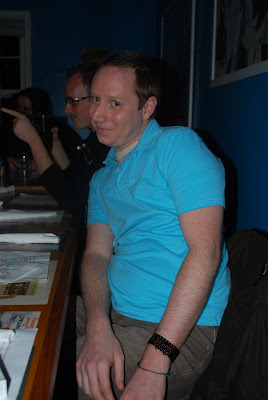 Nathan and I met in my hometown — Jonesboro, Arkansas. I moved to Memphis after college and Nathan followed a couple years later. I love Memphis for all its grittiness, but Nathan hasn't been happy here. He prefers the small town life, and he's elated to be moving back to the country. Unfortunately, this means Nathan will be about 10 hours away from me!

Anyway, Nathan had his birthday/going-away party at Three Angels Diner, a kitschy cafe in the Broad Avenue Arts District. I've reviewed the place before, and they have quite a few delicious vegan options. Our waitress was even vegan!

Perhaps my favorite vegan item on the menu is this Mock Egg Salad Sandwich made with tofu, vegan mayo, and grilled crusty bread: 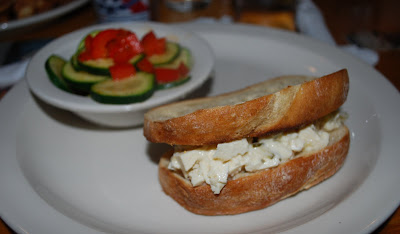 Sandwiches come with homemade chips, and they're super-yummy. But I was having a fat day Saturday, and we were eating dinner very late. So I opted to sub my chips out for one of the many veggies-of-the-day (most all of which are prepared vegan). I went with the sauteed zucchini and roasted red pepper side.

My boyfriend and I also split the restaurant's last overflowing bowl of vegan Broccoli & Cauliflower Soup: 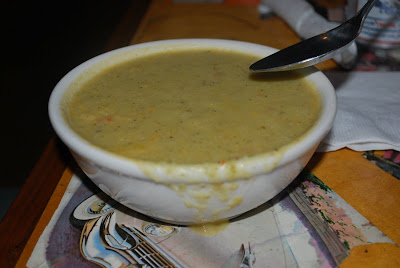 Nathan requested that I make Chocolate Cupcakes with Caramel Glaze: 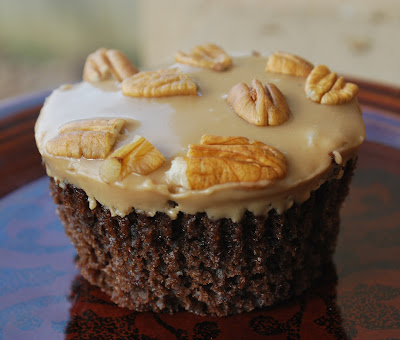 The cupcake recipe is my basic stand-by from Vegan Cupcakes Take Over the World, but I veganized this recipe from AllRecipes.com for the caramel glaze. At first, I tried the Brown Rice Caramel Glaze from Isa's cupcake book, but my soymilk powder was apparently expired.

I wasted a whole cup of brown rice syrup before realizing the soymilk powder had gone rancid. My only other option was to scour the internet. Luckily, the recipe I found was easily veganized and delicious.

Where in NC? If in the Raleigh/Durham/Chapel Hill area, he'll be in good hands! =)

Those cupcakes look so good!

SUPER-YUM!! That cupcake is so photogenic... :P

What a bummer about wasting a cup of syrup.. uuggghhh..

I'm sorry your friend is leaving.. that's always hard to get used to.

Three Angels is DEFINITELY on my list for my next visit.

And wow, that glaze turned out great!