... cool drink of water, such a sweet surprise. Tastes so good, make a grown (wo)man cry. Sweet cherry pie, yeah. I've had Warrant in my head all day, and now it's in yours. You're welcome.

Why am I stuck on Warrant? Because it's President's Day, the day before
Ge

orge Washington's birthday. And popular American myth tells us that our first prez chopped down a cherry tree, only to be overridden with guilt later. So he narced himself out to his daddy.

To honor this classic American attempt to encourage honesty, my mom bakes a cherry pie every President's Day. Its a fairly new tradition, I think. I certainly don't remember her doing that when I was a kid. But I've decided to follow in my mama's footsteps and bake a vegan cherry pie every Prez Day. Lucky for me, the recipe o' the month in Sarah Kramer's Go Vegan 2011 wall calendar is for Like a Virgin Cherry Pie: 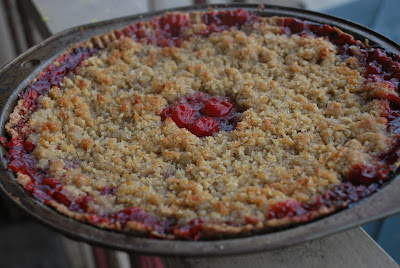 Yes, that's a Madonna reference. Get it? Cherries, virgins. Kramer's even dressed as Madonna from the Like a Virgin album cover. Here's the real Madonna. Kramer is just as cute. 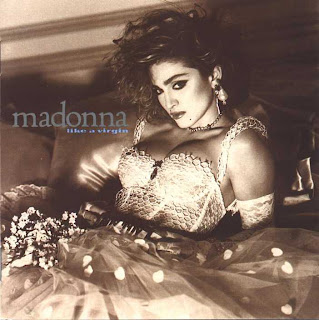 As for the pie, it was delicious. Old George woulda been proud. I did have to sub cherry pie filling for the fresh cherries in the recipe since they aren't in season here. Because of that, I used too much filling and it overflowed during the first half of baking time. But the coconut/walnut/sugar crumble topping (yes, it's as amazing as it sounds) doesn't go on until the last 30 minutes, so it was no problem to scoop out the overflow. Unfortunately, that did make the outside crust a little messy. 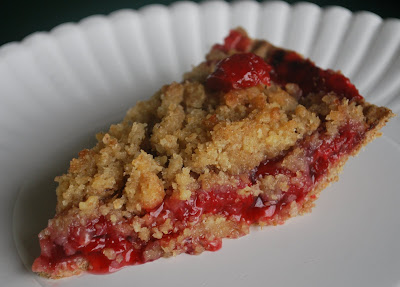 But hey, who cares about a messy pie when it's delicious? I brought this to work, and it was quickly devoured by my co-workers. Happy birthday, Georgey!
Posted by Bianca at 10:32 PM

Gaaaah that sounds awesome! Coconut and cherries... yum! Sarah Kramer is a genius. And I really like that tradition of your Mom's. I always heard that story was a myth, but it's still a good excuse for pie. Maybe I'll steal that tradition from y'all.

I never had a cherry pie and now I really want a slice. It looks so delicious!

That looks yum. I've had the Like A Virgin Cherry Pie staring at me from the calendar all month, but I'm trying to stay away from too many sweets. Guess I'll just have to drool over your picture and dream!

Only one week left to make the pie. Oh the pressure!

Followers of this blog should check out Today’s Diet and Nutrition, an award-winning digital magazine available for free online and in mobile format. Our monthly magazine offers delicious and healthful recipes, many of which are vegan, vegetarian, and/or gluten-free! We also provide fitness and weight-loss strategies, ideas for green living, and cooking tips. Log on to www.tdn-digital.com/or follow us on Facebook for daily recipes, editor’s picks, and healthful tips.

Holy shit, that pie is seriously making my mouth water. It looks AMAZING!

Thanks for the song that's going to be stuck in my head ALL NIGHT now. ;-)

Pies are meant to be messy. They messier the better. Great tradition. I may have to start that as well.

Doesn't it seem sort of dumb to have Cherry Pie as yr February recipe when cherries aren't in season for anyone?