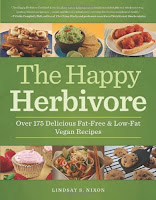 I recently received a copy of Lindsay Nixon's newly-released Happy Herbivore cookbook for review. As a long-time fan of Lindsay's low-fat vegan blog, I'd been awaiting the book's release for ages. Over the years, I've downloaded several of her e-books and I knew this full-color, food porn-heavy book would be awesome.

There's literally a photo on almost every page! That's such a rarity in cookbooks, but it's so nice to see every dish. My mouth waters when I flip through the pages, and I want to make everything! In case you don't know about the Happy Herbivore way, most dishes are made without added fat. They're not all fat free, but many are. Even Lindsay's delectable baked goods (think strawberry cupcakes and black bean brownies) are healthy!

I'll be hosting a giveaway of this book next week, along with reviews of several more recipes. But I wanted to throw in a little pre-giveaway teaser tonight. The first recipe I've made from the book was this Breakfast Sandwich: 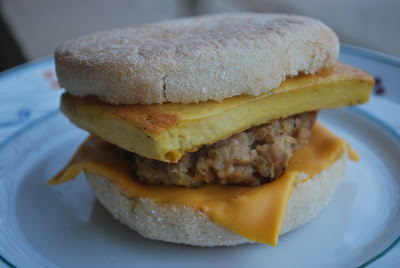 In my pregan days, I would occasionally go through the McDonald's drive-thru (gasp! I know!) for an egg and cheese McMuffin or biscuit (sans the sausage of course). I always loved McDonald's weird eggs made from some kind of egg mix. They were unlike any other eggs I could make at home back then.

But Lindsay has it down, and her "eggs" aren't even eggs. The breakfast sandwich actually uses two recipes from Happy Herbivore — the Nomelet (a baked vegan tofu omelet) and the Breakfast Sausage (it contains quinoa and Gimme Lean!).

The Nomelet recipe makes one big giant omelet, but you cut it into pieces for individual breakfast sandwiches. The English muffins were Orowheat Extra Crispy, the only vegan ones I could find without driving out to Whole Foods. The cheeze is Galaxy's soy vegan slices, which have greatly improved since the last time I tried them.

Anyway, this sandwich is a winner ... way better than anything I ever ordered from McDonald's! Tune in next week for more on Happy Herbivore and a cookbook giveaway.

Do you have a past fast food guilty pleasure?
Posted by Bianca at 10:33 PM

I have a current fast food guilty pleasure. Taco Bell's fresco bean burritos are vegan! (Order them grilled and load up on the fire sauce and you've got a cheap and fairly decent meal.)

I tested for this gorgeous cookbook, but I didn't test this recipe and now I'm dying to try it! Thanks for the awesome pre-review and I'm looking forward to seeing what else you've tried so far!

I figured that was tofu...now knowing that it is a vegan omelet really has me intrigued.

so awesome, Bianca - that's one helluva breakfast sammie, fo 'sho! i see those little quinoas peeking through in the sausage, and the tofu-egg looks awesome! don't worry, my friend - i used to eat me some mcdonald's bfast sammies back in the 'ol pregan days as well. i loves those damn sausage mcgriddles. what the hell was wrong with me?! ahahahaahaa! although thinking back on them now it makes me wanna recreate them. i might just give it a whirl as foods for life makes xgfx english muffins. but anyways.....oh yeah, and the galaxy cheezes HAVE gotten soo much better. try the rice ones - especially the american cheeze flavor. so yum!

i also wanted to thank you for your thoughtfulness and kind words about Jasmine....and i'm glad to be back as well - missed you all so much!

YAY! you got your copy...and somehow I *knew* you'd LOVE that sammich

I LOOOOOVE that Nomlette recipe. Ever since I saw it on Amazon on "Look Inside" I have made it on Sunday, one to eat and one to use for breakfast sandwiches throughout the week. I am dying to try it with the sausage. I got my copy yesterday, yay!

OMG!!!! I just saved a copy for pick up after work today!!! I can hardly wait to try the "eggs". I do miss eggs, I have to admit so this will help tremendously!!! I'm so excited!

It makes me happy to see a review of this book that I know I can really trust <3
I love Lindsay's website too. Thanks to an Amazon snafu I don't have my book yet, but I've decided to just get it at Barnes and Noble.

Yay! I also received a copy for review and my jaw dropped when I saw all those beautiful full color pictures! It's possibly the most beautiful and colorful cookbook I've ever seen.

I already have a long list of recipes to try - sweet potato home fries? Yes, please! Red lentil dal? Yes yes! Strawberry cupcakes? Hell yes! All the recipes are so down to earth too, which I love!

Sweet, can't wait for the giveaway! My fast food guilty pleasure in my pre-vegan days was the chili cheese burrito at Taco Bell.

yay! hells yeah, i had some ff pleasures--too many to mention. i rather enjoyed a mc griddle sans meat. great thing about going vegan is it saved me from putting that poison in my body.

i confess that i loved the mcd's version of this way back when, and this picture looks great. i have not picked up her book yet, but i'm thinking i need to :)

I don't like fast food, but this veganized egg-mcmuffin sounds fun! Can't wait to see this book in person.

Oh man....that breakfast sammie looks sooo good! I just ran across Lindsay's site the other day. She has some great looking and sounding recipes that I am dying to try!