I generally pick my fave Superbowl team based on which team has the best color scheme and logo. This year, that meant I was backin' the Packers. Lucky for me, my shallow reason for supporting Green Bay led to me supporting the winning team. Considering that I know nothing about football, I have a pretty decent record of choosing the winning team every year. Pays to be shallow.

The real reason I watch the Superbowl isn't for the game or even the commercials. It's all the food (and the beer) of course. Most years, I make some variation on vegan buffalo wings, but I had a major hankerin' for chili-cheeze dogs. And that can only mean one thing — Diablo Dogs! 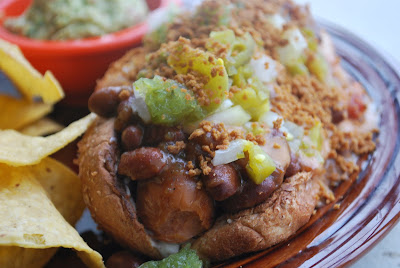 The idea behind this monster of a veggie chili dog came from the incredibly-awesome Jen of Pain In the Ass Vegan. I've made 'em before, but it's been awhile. Click here for Jen's step-by-step photo guide to building a proper Diablo Dog.

I had to eat something semi-healthy on the side to make up for my Diablo Dog transgression. So I whipped up a batch of Lindsey's Low-Fat Guacamole (a.k.a. Edamole) from Happy Herbivore: 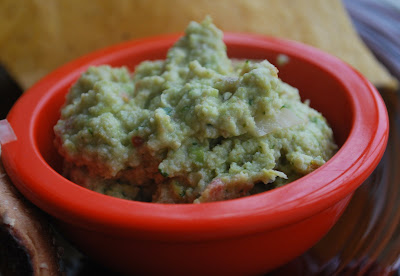 This avocado-free guac is made with edamame, lime juice, onion, and cilantro processed in a food processor. The the recipe calls for tomatoes, but I straight-up forgot to buy one when I went on my Superbowl day beer run. Instead, I mixed in some salsa.

Now I'm a huge avocado fan, and when I first saw this recipe, I honestly didn't think I'd be trying it. Why would I ever want to sub out an avocado? But I ate lots of calories in Little Rock over the weekend, and I figured it couldn't hurt to cut back just this once.

The edamole was actually pretty darn tasty, and the leftovers don't brown overnight in the fridge. I'll probably stick to creamier avocado-based guac for most occasions, but this was a great substitute since I was the only one eating it. Now I have leftover guac for days!

By the way, I mentioned an upcoming giveaway last week of Lindsey's fabulous Happy Herbivore cookbook. The publisher had suggested a giveaway when I was contacted about reviewing a copy. But I learned after my last post that they're out of giveaway copies until April, so I think I'll hold off on a contest until then. Sorry! If you can't wait (and really, you shouldn't wait cause this book is awesome!), you can always order the book from Amazon.

What'd you serve on Superbowl Sunday?
Posted by Bianca at 10:22 PM

that dog looks messy and tasty

I've got lots of chili waiting for a dog like that. We made pizza.

Guacamole! The avacado kind ;)with a lot of lime and cilantro!

and sorry about the 'delay' the book sold out fast and we're waiting for more copies to arrive.

Yum!!! I just made brownies and brought extra plates... I'm not an amazing cook (yet!)

But that chili dog looks AMAZING!! I can't wait to make it one day. Finally, a fatty-looking hot dog that looks like my boyfriend's meat one, but is 200x better!! :)

really intrigued by the no-avocado guac! will have to try it soon (maybe when baseball season starts up)!

And once again you have me wanting to eat right off the screen :-) Makes me ache for a Chicago style vegan hot dog!