Look Lindsay Nixon, I know you have a husband and all. But I really think we should get married anyway. I assume this means that you would cook delicious fat-free meals for me every night, right? If so, let's get hitched!

Yes, I just proposed to the author of Happy Herbivore. Since she's spoken for, I may have to keep dreaming. But maybe I can just marry her book. I would settle for that. Why am I so very enamored with Lindsay and her recipes? Here's why — Spicy Greens with Spicy Sausage: 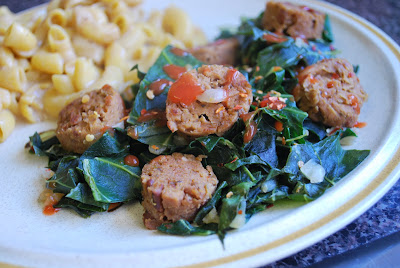 It's simple really. Just Lindsay's homemade spicy steamed sausages (made in the Julie Hasson way) sliced up in collards with red pepper flakes, onion, garlic, and hot sauce. But as a Southern girl, I've never been all that crazy about collards that weren't cooked for at least 40 minutes. I've tried the quick-cook methods, but they always leave something to be desired. For some reason, Lindsay's simple preparation is just as tasty as if the greens simmered on a stove for hours. And there's no oil! Just blows my mind, really.

Did you notice that sexy macaroni peeking in the background? Yep, that's a Happy Herbivore recipe too. There's two variations on vegan mac & cheeze in the book — one is baked and the other is made on the stovetop. As a former fan of boxed macaroni and cheese, I opted for the latter — Easy Macaroni & Cheese: 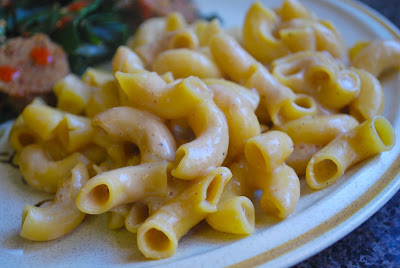 It's made with Lindsay's creamy-as-hell vegan noochy sauce. Ridiculously good, y'all.
Posted by Bianca at 10:25 PM

I've been looking for what my next cookbook purchase should be. You may have me convinced...

I think rather than proposing marriage you should propose a sales commission because I think you have convinced us all to buy this awesome book! lol I'm headed to amazon now... :)

I have Lindsay's other mac & cheeze (the baked one) on my menu for this week. I'm glad to see there is someone as similarly obsessed as me! :)

I just got her cookbook in the mail on Tuesday and I've already made like 6 recipes from it. They are D.E.L.I.C.I.O.U.S!!!!

i still need to get a copy of her book... im excited to try her recipes!

I.need.this.book! I want some of that mac and cheese right now!

All this talk about her book has got me insanely curious! I might have to pick up a copy for some, ahem, research. :)

Vegerator is a vegetarian recipe website that helps you create tasty meals based on what you already have in your home. It’s simple: you type in the food you currently have in your fridge and pantry; then Vegerator presents you recipes that include those ingredients.

I understand this is probably considered spam, so no hard feelings if you delete it! We're new to the web & just trying to get the word out.

so awesome on the collards. i always have to cook mine for close to an hour, too - but how awesome that Lindsay's recipe rocks the most socks without all that time spent cook'n 'em. nice! the mac 'n cheeze looks soooooo good too, Bianca! another plate of awesome! so yum!

Must get the Happy Herbivore book right away! Thanks for bringing it to our attention. These recipes all look amazing... CHEERS, hope you're well.