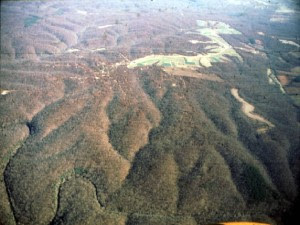 This past Saturday, my boyfriend Paul and I road-tripped over to Summertown, Tennessee for a vegan retreat at the Farm. I was asked to lead a cooking demo there on Saturday, nestled between demos by the legendary tofu queen Louise Hagler and Speed Vegan Chef Alan Roettinger! Needless to say, I was honored to be included in such an awesome group of vegan cooks. The Book Publishing Company, located on the Farm, is publishing my Southern vegan cookbook later this year.

In case you've never heard of the Farm, it's a community of vegans and vegetarians who've been living on several thousand acres of land in middle Tennessee since the early 1970s. The original Farmies traveled to Tennessee from San Francisco in a caravan of school buses in 1971. In the mid- to late-70s, the Farm became a destination for progressives looking to practice the principle of nonviolence and shared respect for Mother Earth. The above photo is an aerial view of the Farm that I borrowed from the their website.

Today, a handful of the original settlers (and a few newbies) still live on the Farm. They make their own tofu and soy yogurt, and the on-site publishing company puts out amazing vegan cookbooks (think Tofu Cookery, the Ultimate Uncheese Cookbook, Sweet Utopia, etc.). They have an awesome solar-powered school for Farm kids, and many members grow their food in community gardens. I could write all day about place, but I've got a blog post to do. So if you want to learn more, check out the Farm's website.

The vegan retreat began on Friday night at Douglas' house. Douglas has lived on the Farm since its early days, and he organized the retreat. We met at his place for an opening night supper, and Paul and I arrived just minutes before the meal was served (good timing!). We started the meal with a glass of Douglas' homemade Blueberry Wine: 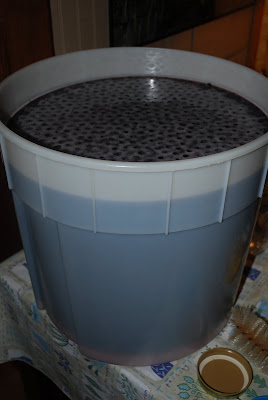 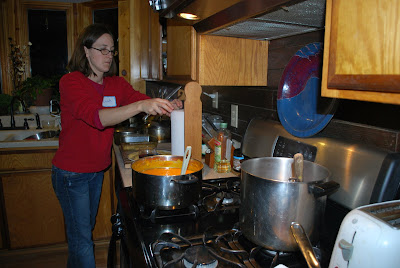 Here's my plate with the potato soup, a baked sweet potato, one amazing raw cracker, and some cornbread made from ground corn that Douglas grew in his own garden: 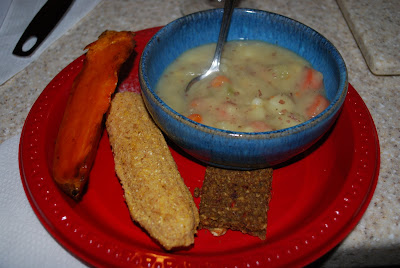 After dinner, Douglas brought out Ice Bean!! There's a soft-serve Ice Bean soy cream machine at the Farm, and members fill up tubs to bring home. Maybe it's because it's homemade, but Ice Bean tastes better than any other ice cream I've ever had. 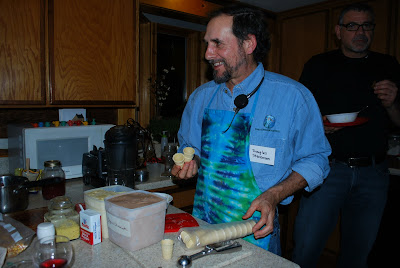 He had chocolate and orange-vanilla, and he served it tiny little ice cream cones. How cute are these?! 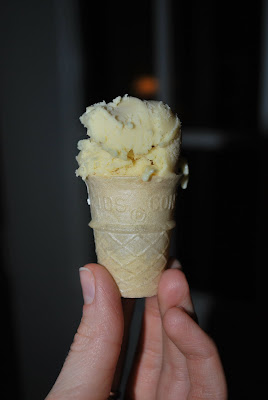 After dinner, Paul and I drove over to cookbook author Barb Bloomfield's house (she wrote Fabulous Beans and Soup's On), where we retired early in one of her guest rooms.

I took a crap ton of photos at the retreat, so I'll be splitting these up into three installments. Check back tomorrow for pictures of Louise Hagler's cooking demo!
Posted by Bianca at 11:08 PM

Hi!I like your blog, I dicover it now!soo cute!^__^ come in my Equo, eco e vegan blog e tell me if you like it! Bye, Kia

I have always wanted to visit The Farm! How awesome!!!

What an awesome weekend you must have had! Thanks for sharing it! I'm looking forward to your other posts.

Ice Bean is probably the best name for soy ice cream ever, lol!

How fun!! That's so neat that you were asked to demo at that event. Go, Bianca!

I love these Farm entries! and I'm super jealous that the have a soft-serve ice cream dispenser.

This place is amazing. I have lived in TN all my life, and mostly middle TN and I never knew this place existed! I would love to take a retreat there, but it's pricey! I'll have to save up :)

I am so jealous you went to the Farm. I have been interested in them since way back when I wanted to start a vegan community of my own (which didn't work out). And I love Alan Roettinger's book. Must have been great to have a class led by him.