This is my best friend Sheridan, and when I say "best friend," I mean absolute BFF. We've been best friends since we bonded over now-deceased teen actor Jonathan Brandis when we were in the eighth grade: 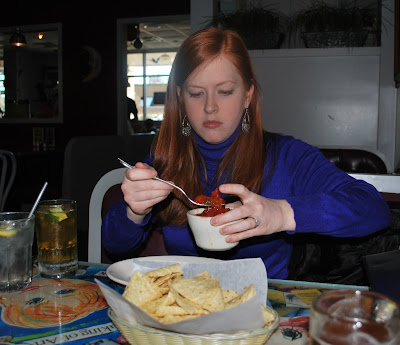 On Saturday, I made the two-hour drive southwest to Little Rock, Arkansas to try on bridesmaids dresses for Sheridan's upcoming wedding. Although Sheridan's been vegetarian for years, she just went vegan on New Year's Eve. This was the first time we'd hung out since then and she had lots of suggestions for delicious Little Rock vegan eats.

Pre-dress shopping, Sheridan, Brittany (Sher's other best friend/my former college roommate/the other bridesmaid), and I stopped at Izzy's for lunch. I started with a Diamond Bear Two Term IPA, a local beer brewed in the LR. I'm not much on dress-shopping, so I needed a beer (or two) to make shopping tolerable: 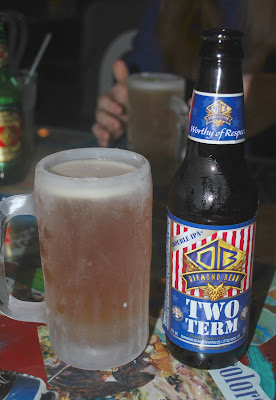 We came to Izzy's for the Vegan Tamales: 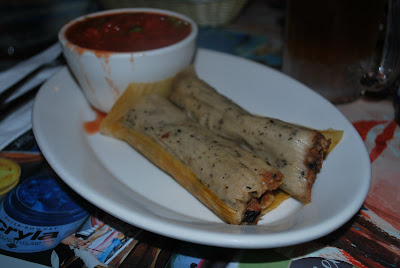 These were WONDERFUL! They were stuffed with a black bean/veggie mixture and we topped 'em with salsa. These were only the second vegan tamales I've had in my life.

After lunch, we tried on dresses and of course the bridal shop had nothing in my size. In fact, they don't even make my size, and I have to get my dress altered. I've never really wanted boobs, but it's annoying when clothing shops don't recognize that there are ladies out there who wear less than an A-cup.

After the stress of trying on too-large-on-top dresses, I needed dessert. Thankfully, we were able to find dairy-free Orange Sorbet with fresh fruit toppings at a build-your-own yogurt bowl joint called Yogurt Mountain: 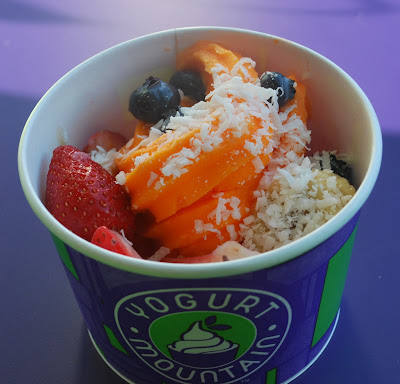 Britt had to go home after dessert because she has a kid. But Sheridan and I went back to her house for a bit. When our tummies started growling again, we (and Sheridan's newly-vegan partner Drew) decided on Lilly's Dim Sum and Then Some for dinner. This cute Asian restaurant used to be located in Memphis, but its owners moved it to Little Rock several years ago. I'd not eaten there since Lilly's Memphis days.

We started with the Vegetable Gyoza, a chewy-yet-tender vegetable dumpling: 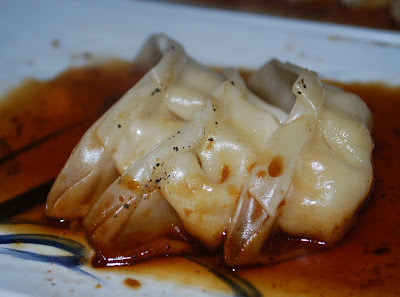 For our main course, all three of us ordered the same thing — Spicy Panang Curry with Tofu: 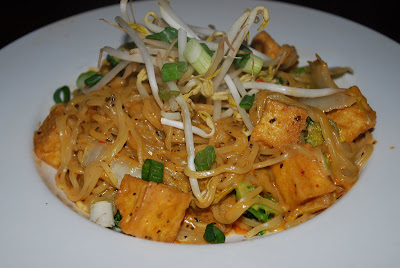 Why were all three of us drawn to this dish? It's made with Ramen noodles! And we all agree that Ramen noodles might be the best thing in the whole world. The semi-spicy sauce was creamy and coconuty and the tofu was perfectly fried. Turns out Little Rock is pretty vegan-friendly!
Posted by Bianca at 8:33 PM

Oh man, how I miss Lily's! I used to live in Memphis (still live nearby) and went to Lily's all the time. Glad to know they are still around, even if not terribly close to me.

Every time you share your eating out adventures with us, I get seriously jealous of the things you find. Makes me wish I lived closer to all this.

Jonathan Brandis and ramen noodles are two things I definitely loved a lot in elementary school. And I still love one of them ;p

It's nice to hear that there's another AA girl out there. All that food looks amazing, too- you guys really found some good places!

As a Little Rock resident, I'm pumped that you picked some of my favorite places to eat! I had lilly's for my bday and the best mango sorbet my lips have ever touched. We have a wealth of little amazing restaurants in the rock. I have just recently discovered Chang's (thai food) on JFK in North Little Rock. I highly recommend on your next trip back. Ps. I will always love Jonathan Brandis

Way to go for Sheridan becoming vegan! Looks like those tamales (and beer) can make a good day out of dress shopping.

I must tell you that those vegan tamales look incredible and does the dessert. All those fresh fruit toppings look just so yummy. Thanks for sharing.

i would have needed some beers before dress shopping too, Bianca. i can't blame ya! those tamales look rock'n, and i'm dig'n the dumplings and the panang! mmmmmm! huzzah for a dairy-free option at yogurt mountain, too. score! also awesome - getting to hang out with your BFF who's newly vegan AND her also newly vegan man! that rocks SO HARD! yay for new vegans!!!

Besties are so awesome! How cool that she is vegan now.

(the food looks good too!)

Hahah! I love Eve and Bianca! Great weekend, wonderful food and don't let Bianca fool you, she is going to look awesome in her bridesmaid dress! We got super cute ones!

Thanks so much for the great tips! I added Izzy's to VegGuide.org after reading about it on your blog (and gave you the credit for it). VegGuide also lists a couple other places with great vegan options:

thanks for your advice on the agar powder! luckily, i live very close to a whole foods, so that should be pretty easy! thanks a bunch, keep blogging

You also need to try 4square Cafe & Gifts in River Market District down town Little Rock. It is the only total vegetarian deli with vegan options. It also serve gluten free food.