I know Daiya vegan cheese has been making appearances in pizzerias in major cities across the country for, like, forever. But Memphis is always a few steps behind. We've had vegan cheese offered at our Mellow Mushroom in nearby Germantown for a few months, but Midtowners like me have to drive 45 minutes to get there.

Enter the Hi-Tone Cafe. This rock club features shows by local and national touring acts nearly every night of the week. It's the kind of music the cool kids like (indie rock, hipster music), so naturally, it's not really my scene for shows. But the Hi-Tone also serves food, and they've just begun offering Daiya vegan cheese for their delicious, massive homemade pies. Just last week, some friends/co-workers and I ordered this Veggie Pizza with Vegan Cheese: 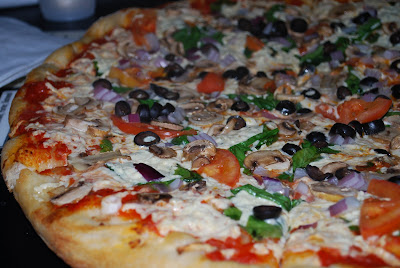 Damn, was this pie tasty. The kitchen is super-generous with the Daiya and it's piled with veggies like mushrooms, spinach, etc. After ordering, we realized that we could have added veggie burger to the pizza for an additional charge. Oh well. Next time.

Here's Hannah and Ashley, ready to dig in: 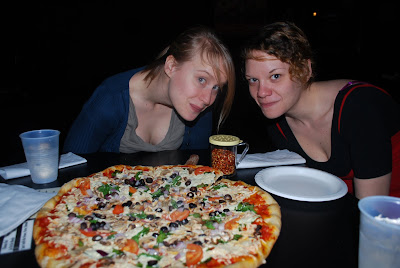 The Hi-Tone also serves Sunday brunch, and they typically offer some sort of vegan special. Some days, that means tofu scramble. Other days, that means vegan pancakes. I'd recommend you call first on brunch day though, just to make sure they have a vegan option. Here's a tofu scramble platter (with lots of taters, asparagus, and toast) that I ordered on a past Sunday brunch: 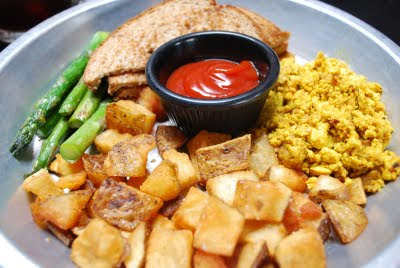 They also have homemade veggie burgers on the regular dinner menu, but I've never tried them. It's hard to order a burger when there's vegan cheese pizza available.

Oh, good lord, VeganRella! That was my first introduction into the world of vegan cheese, as well... like melted plastic it looked/tasted. *shudder*

So jealous you have vegan pizza options around you! That pie looks picture perfect. Nom.

That pizza looks yummy! I am lucky to have three different places that serve vegan pizza within an hour of my house. Two use Daiya and one uses Follow Your Heart, and I like both. I'm with you on VeganRella, though. Ick. Never tried Teese, but I still want to.

Gorgeous looking pie! I haven't tried Daiya, and never had VeganRella. My intro to vegan cheese was FYH, which was pretty good and I think it's gotten better over the years; I just don't use it much.

That looks amazing! I can't believe I've never had Daiya

That pizza looks AWESOME! I've never tried vegan cheese but I would dive right into this pie! Mmm

Hey! I am putting together a vegan community blog. It is a blog where any vegan blogger can post whenever they want, promote what they want, pretty much do whatever they want. If you are interested and have a blogger account just send me your blog account email to kaycee@donevegan.com and I can add you as an author so you can freely post, or you can send any submissions to submissions@donevegan.com and I can manually post them.

Let me know if you are interested in contributing and I can send you more info if needed.
Thanks!

We're so excited that your local pizza joint added Daiya to their menu! We have included Hi-Tone Cafe on our "Where to Find" page on our website http://www.daiyafoods.com/where/index.aspx

We love reading your blog, thanks for your continued support of our products!

Aw thanks Shnane!! The Hi-Tone will totally appreciate that. I'm doing my best to get the word out so people will keep buying it.

That is one good looking pizza!!!

Ah I wish we had gotten to eat there- next trip!!

One question... do you know any vegan SWISS cheeses that melts?