Another blogger (can't remember who!) raved about Joanne Stepaniak's Colby Cheeze from The Uncheese Cookbook recently, and I'd been craving a grilled cheeze prepared in my new panini press. So I pulled out my well-worn copy of the Jo's fabulous un-cheesy tome and whipped up this recipe for the Colby block cheese: 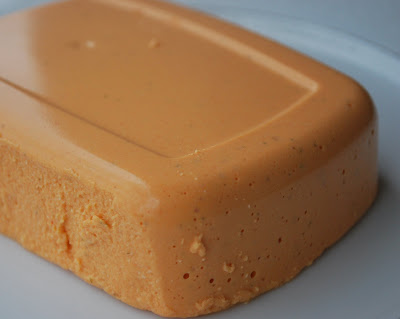 Agar powder (the recipe calls for flakes, but I only had powder) firms up the cheeze, creating a sliceable block perfect for sandwiches. I made a sandwich with a few slices of the Colby and some Lightlife Veggie Baked Ham, and then I cooked it up in my new panini press: 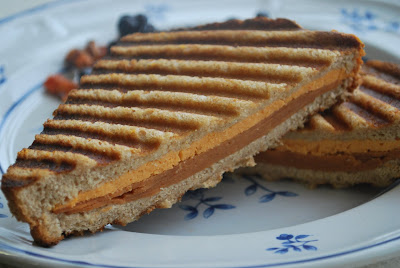 Yum, yum! Sticking with the orange theme, I chose the Carrot Fries with Blueberry Ketchup from Colleen Patrick-Goudreau's Color Me Vegan as a side dish: 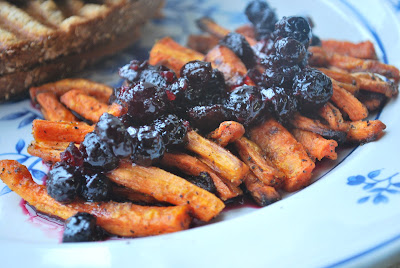 This is the first recipe I've tried from Colleen's new book, which is organized by color of food. She emphasizes which phytochemicals come from what plants based on whether they're red, orange, yellow, green, blue, white, tan, brown, black, and even rainbow!

The carrot fries were simply roasted matchstick carrots spiced with cumin, and they were yummy. I didn't have to cook them nearly as long as instructed though. The blueberry ketchup (from the blue chapter, of course!) was made from frozen berries cooked down with sugar, ginger, and vinegar. It tastes similar to ketchup, but with a blueberry kick.
Posted by Bianca at 10:33 PM

I've been craving some seriously crispy grilled cheese lately, and that looks like the sammich of my dreams. I may just have to whip up something similar this week. Also, roasted carrot fries, yum!

that looks so dankers!

Blueberry ketchup, wow. I bought that book as soon as it came out and I've sort of been too busy to use it or even flip through it, but I must!

I LOVE that cheese! I was pretty skeptical about how it would turn out, but man, it was yummmmmmmy. I think I made it at Christmas (and added a little liquid smoke), and everyone loved it on crackers. You know it's a good vegan cheese when even non-vegans will eat it "raw"/without melting!

THose roasted carrot fries look DELISH!!! I am gonna whip some up for lunch today! haha oh and I have a question, where do you get Agar powder or flakes? Do they sell them at Whole Foods?

i was just craving a grilled cheese but i don't care for daiya...i'll have to give joanne's recipe a try! i'm so intrigued by that blueberry ketchup...i just can't imagine blueberries tasting like ketchup!

Posted this on my blog, but figured I'd leave it here too :)

Re: Spice rack- It's based on art by Lora Fosberg and was painted by an ex of mine. I sold it in a garage sale after the breakup, and miraculously found it for sale at another sale a few years later. I bought it back and am purty pleased with myself! Heheh! Crazy story, huh?

omg, carrot fries and blueberry ketchup.. that is freaken brilliant!

This is a dumb question, but is the colby melty at all?

I believe that was me actually! lol I was just thinking about this colby and how I want to have it again. Glad you tried it, your panini is AWESOME! And those carrot fries, WHAT?!

How cool! I had never heard of a cookbook organized by food color. Interesting!

The cheese looks awesome, as does your grilled sammich! *WANT*

this looks great too. i was a huge fan of cheese (back in the day) and have yet to really find anything i like. daiya is fine, but it doesn't work for everything. i've made nut chesses and things, but never really enjoyed them. seems every post i read, i'm finding another book i need :)

i need to try this Colby Cheeze asap!