I was smack dab in the middle of my 21-day Vegan Kickstart cleanse in January when I received an exciting email from Annie at Meet the Shannons. She informed me that I'd won a VegNews-sponsored giveaway on her blog.

I wasn't sure exactly what the prize was, but I knew it involved a year-long subscription to my favorite vegan glossy mag. My old subscription was about the lapse, so perfect timing. When the surprise box arrived, it also included a giant reusable tote that I've since used several times for hauling groceries home from the Whole Foods: 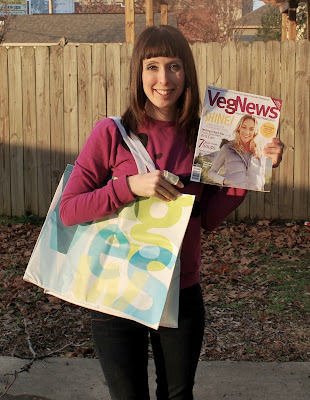 But the best part of the gift package? Cookies!!! Six giant vegan cookies from Alternative Baking Company, to be precise: 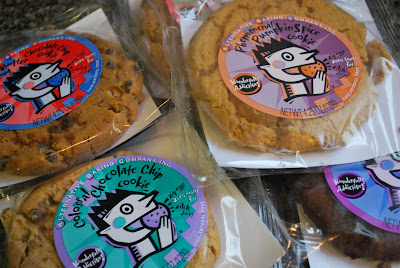 Unfortunately, these cookies arrived about a week and a half before I could get back on the sugar. I had to resolve to wait and eat them when the Kickstart plan was through. Y'all, those cookies almost broke my will ... several times. But I held firm and held out until January 22nd.

On that first day off the cleanse, after downing Daiya-covered Mellow Mushroom pizza and vegan peanut butter cups, I ate a whole big ole Alternative Baking Company Simply Vanilla Bean Cookie. I'd never had that flavor before, and it was truly delicious. Strong, real vanilla flavor with just the right amount of softness and chewiness.

The other flavors in my surprise box: Double Chocolate Decadence, Colossal Chocolate Chip, Phenomenal Pumpkin Spice, Outrageous Oatmeal Raisin with Walnuts, and Peanut Butter Chocolate Chip. Most of these are stored in my freezer, but I've also finished off the PB Chocolate Chip.

Oh, by the way, don't forget about the Vegan Cooking Retreat at the Farm in Summertown, Tennessee from February 25th-27th. I'll be leading a cooking demo, along with some awesome vegan cookbook authors like Louise Hagler and Alan Roettinger! Click here to register.

What are your favorite store-bought vegan cookies?
Posted by Bianca at 10:08 PM

Yay, how excited... omg those cookies look so delish.... it must have been horrible having to wait for the sugar time to come back... and the colors in that bag are lovely!

I love Alternative Baking Company's cookies. My HyVee has a hard time keeping them stocked because they're one of the only vegan cookies in town, lol.

I love the double chocolate chip one, but I know that that vanilla bean one would be glorious!

In one way, I'm jealous, but in another, I'm happy not to have this temptation! Those are great cookies. I love the lemon poppy seed and the double chocolate chip. Alternative Baking Co were the first storebought vegan cookies that I tried, so they have a special place in my heart, but nowadays, if I'm going to splurge on a giant cookie, I usually get Liz Lovely cowgirl cookies. Yum yum yummyyyyy.

Congratulations! How lucky! Those are Mr. Wing-It's favorite cookies! He doesn't eat them anymore because they are one of his high-triglycerides biggest enemies :(

PS: That picture of you is too adorable!