If you missed the previous post, you might be wondering what DOFO stands for. That's "Vegan Day of Food," a clever (if I do say so myself) play on November's Vegan MOFO (Month of Food). I rode with Stephanie (Poopie Bitch), her husband Richard, and their new Poopie Baby Peter on a three-hour drive to Nashville on Saturday for a Nashvegan Post Punk Kitchen potluck. You can read all about our overindulgence at the picnic in my last post.

Our potluck picnic took place at 1:30 p.m. in Nashville's Centennial Park. But we probably didn't start eating until 2 p.m. After we'd crammed as much delicious vegan food into our bellies as would fit, we started talking about where to go for dinner. That's the true sign of a group of vegan foodies. We never stop talking about eating. For some crazy reason, we all decided to meet up at Wild Cow Vegetarian Restaurant at 6:30 p.m., only about 4 1/2 hours after lunch!!

I've blogged about Wild Cow before. It's an amazing all-veg cafe in East Nashville. We don't have any 100% veg restaurants in Memphis, so knowing I can order anything on the menu sort of blows my mind. And Wild Cow serves my kinda food — sandwiches, salads, and comfort food sides like spicy kale, sweet tater hash, and hummus. Despite not being the least bit hungry when we arrived, I ordered the Buffalo Grinder Sandwich: 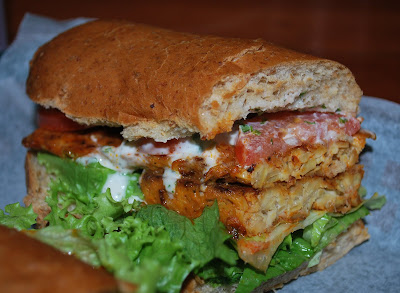 This spicy buffalo tempeh sandwich was topped with vegan ranch, tomatoes, and lettuce. It was so very, very tasty, and I really wished I could have enjoyed it more. But I was just too full. I only ate half and saved the other for leftovers. On the side, I ordered the Mango Coleslaw: 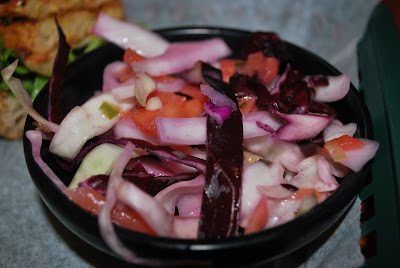 Um, not impressed. This is the first dish I've tried from Wild Cow that didn't blow me away. But I prefer the cabbage in my slaw to be finely shaved and these were more like large strips of cabbage. And I didn't see a single mango. There were some small orange bits that might have been mango, but they were so tiny I couldn't tell. I wish I'd have gone for the hash side instead.

Stephanie's breastfeeding right now, so she says she's still eating for two (excuses, excuses). She had no problem polishing off this whole Tempeh Reuben with hummus and chips: John P and his partner Tim had the right idea. They stuck with salads (Tim even left his dressing off because he was so full!) and a platter of crudites with cashew dip. I sampled John's dip and it was yummy. Somehow I forgot to photograph their food, but here's Tim and John. 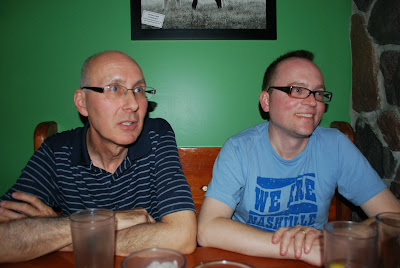 My boyfriend's sister Sheila and her daughter Samantha live in Nashville, so they joined us even though Sheila isn't vegan or vegetarian: 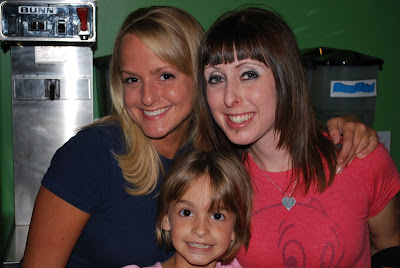 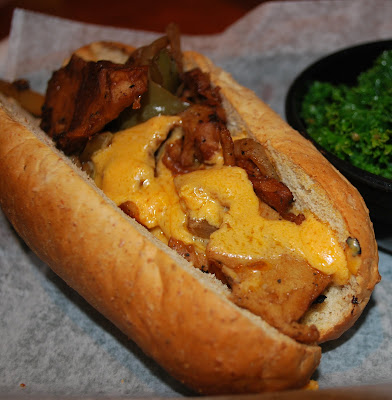 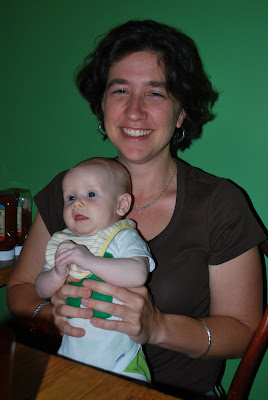 Just kidding! Lisa actually ordered some sort of tasty-looking plate with tofu and sides. She didn't eat the baby. Or did she?

We left for Memphis after dinner, and I swore I'd never eat again after all that gluttony. But alas, I had my leftover Buffalo Grinder sandwich for lunch the next day. Now I'm ready for the next Nashvegan DOFO, only next time I'm not eating quite so much. Aw, who am I kidding? Of course I will!
Posted by Bianca at 11:37 PM

Oh my goodness...my husband and I are drooling over that first pic of the buffalo Sammie...I haven't tried to cook with tempeh yet, I wonder if it is difficult? I'd LOVE to hack that recipe! I heard Annies Organics makes a vegan ranch but I have had exactly zero luck finding it...IDK.

Do you go to a vegan meet up or something, or are these just friends? I used to love going to my local vegan meet up and trying amazing new places to eat back when I lived in Tucson. Ahhh....

That mango slaw is the only thing I've had there that really didn't impress me. I meant to tell John and Melanie about that...because everything else is SO GOOD.

mmmm. Now I want Wild Cow and they're closed today...haha.

Wait; I didn't finish. I meant to say; the hash is not impressive either. Stick with the spicy kale or that chili verde pumpkin seed salad w/beets and jicama (they have a version that's a side); or the veggie of the day. The mango slaw and the hash are...very strange. The hash is like super thin slivers of sweet potato that are fluffy/dry...it's really weird. My husband thought it was a pile of fake cheese but I don't think so...

I sitll cannot believe I've never had Seitan. Have you ever had trouble cooking it? I'm dying to try that Philly. YUM!

I must recreate that buffalo tempeh sandwich! It looks delicious. I don't thinkk I would have been able to eat it all either after all the potluck food. I am writing the name of that restaurant down, just in case I ever end up in Nashville.

That buffalo sandwich is straight up ridiculous. Also, the most beautiful marbled rye I have ever seen for that reuben. Sounds like you had a fun and delicious time. :)

Looks like fun...that reuben looks especially tempting! I try vegan reubens every time I get the chance :)

that one buffalo sandwich id wanna grind up next too, haha <3 definitely one uve gotta use both hands to munch into <3

The Buffalo Grinder looks good! I'm glad there is a place in Nashville that is all-veg. Little steps.

AHAHAHA Baby eaters!! *snicker*
Love you for this. And I'm tottally with you on shaved cabbage vs chunky chunks. Boo! Hiss!

I need a Buffalo grinder sandwich in my life!