I have until the beginning of January to finish my cookbook manuscript, and as many of you regular readers know, that means I'm busy testing my stuff over and over. Oh, and editing but that part is so not sexy.

Testing seasonal and holiday recipes out-of-season isn't ideal, but I'm working with like two months here so a girl's gotta do what she's gotta do. I typically make my Hoppin' John Sausage & Brown Rice Bowl on New Year's Day, but I had test it this week: 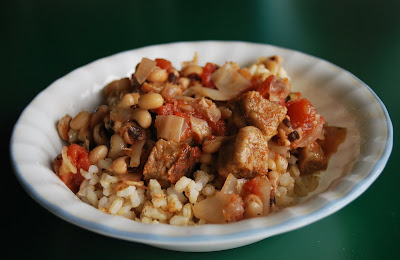 In case you didn't know, Hoppin' John is a Southern New Year's tradition. The black-eyed peas represent prosperity for the new year and the cabbage (or other greens) are said to bring money. Though it's still months until New Year's Day, the pagan new year — Samhain or Halloween — is right around the corner. So we'll just pretend I did this on purpose, alright?

Question: Do you have special traditional foods that you eat every year at a certain time?
Posted by Bianca at 10:55 PM

My gramma always made mashed rutabaga at Christmas and I did this too. Until I found I could buy rutabaga all year long. I still make it Christmas day but also on just about any day I find it at the store. I could live on it.

I've been living in Japan for nearly 4 years and they actually have a tradition of eating KFC on Christmas Eve (Christmas isn't a sentimental holiday here - mostly a date night.) But KFC?? Not only is it gross, but just weird!

That sounds great, I've never heard of that tradition. My family always makes turkey tetrazzini for dinner on boxing day. I'm making a huge chicken style seitan roast this year so hopefully there'll be enough left over for me to veganise it!

That sounds great, I've never heard of that tradition. My family always makes turkey tetrazzini for dinner on boxing day. I'm making a huge chicken style seitan roast this year so hopefully there'll be enough left over for me to veganise it!

My family is boring. Its basically a big old turkey at thanksgiving and thats it. I think Im going to start some new traditions this year. I make a mean stuffed acorn squash and its perfectly festive for Christmas! And Im sure I'll make some Christmas oatmeal concoction in the morning as well.

Anyways, SO excited for your cookbook. Keep up the good work. =]

I don't have many food traditions, but the one that I seem to have brought with me to Germany is ANZAC Cookies. They were developed by Australian housewives to send to their 'boys' in the trenches during the First World War, are are full of rolled oats and golden syrup. I bake mine so they're chewy - some people like them crispy, but honestly, chewy is a million times better. So, on Anzac day, you can guess what I was doing... ;)

I haven't stopped by in a long while since I took a blogging hiatus after I had my daughter. Congratulations on your upcoming cookbook! How exciting! I can't wait to get my hands on one.

I wish we had a food that my family ate as a tradition. Growing up, I remember our neighbors eating sauerkraut on New Year's Day, but that's one tradition I think I'll skip!

My husband and I have a few traditions that we've started: pumpkin pie for all of fall and winter, fudge too, and DH makes a killer Cranberry Chutney for Un-turkey Day.

Looks wonderful. I can't say I have any deep-seated traditions that come to mind. Maybe if I dig deep...

My aunt always makes broccoli casserole for the family holidays and my mom makes graham cracker cream pie. I've veganized both (which is a challenge: the pie calls for a dozen eggs and the broccoli casserole is all mayo, cheese, and creamy soup). And I ALWAYS have yellow cake w/ chocolate frosting for my birthday. We have also started doing Hoppin' John on the last couple of New Year's. Basically, I'm a complete sucker for holiday food and tradition.

Oh, beans and greens for New Years are a must. Yours looks really good - maybe that just means more luck and money for you?

I also do pancakes and beer for birthday dinners. That's a recent-ish tradition I adopted about 8 years ago.

As Puerto Ricans we eat Arroz con Dulce only at Christmas time. I have photos and the recipe this rice pudding on my blog under my Rice file. It is a sweet rice pudding made with coconut creme and sweet spices. It is cut with a knife and it is eaten with a fork. It is delicious.