Long, long ago, the building 1761 Madison in Midtown housed some sort of automotive repair joint. But somehow, over the years, it's morphed into a restaurant. Yet the building maintains the facade of a garage ... only with tables and a fully-functioning kitchen. And it's clean, much unlike a real garage. Within the past year, the eclectic American eatery Fuel Cafe opened in this spot, replacing the former Petra Cafe (a Middle Eastern joint).

When Fuel opened, I kept hearing about the amazing vegan options. But when I glanced at an early version of their to-go menu, I only saw a veggie burger and a vegan soup of the day. So I guess I wasn't in a hurry to try the place. But then last Saturday, our local vegetarian society Food Awareness had our monthly meeting on Fuel's spacious patio ... and OMG! I think I'm in love. Wouldn't you fall head over heels for this platter of Vegan Quinoa-Chili Cheese Nachos?: 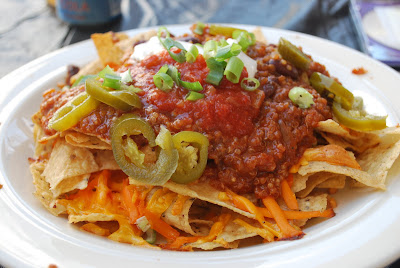 Turns out, Fuel has quite a few options. I must have seen a really old version of their menu the first time. This plate of tortilla strips was piled high with Follow Your Heart cheddar (I didn't ask, but I can tell by the taste and texture), to-die-for quinoa chili, and Tofutti sour cream.

Since we called ahead to warn that about 10 to 15 vegans were coming, they bought the sour cream just for us. But I hear the vegan cheese is a regular item, and they are certainly not stingy with it. There's a whole thick layer of vegan cheese under all that chili. By the way, I ate every chip on that plate even though it was clearly enough food to feed three people.

My friend Greg ordered their famous homemade Veggie Burger, which is clearly listed as a vegan patty on the menu so you don't have to ask questions (I love that!): 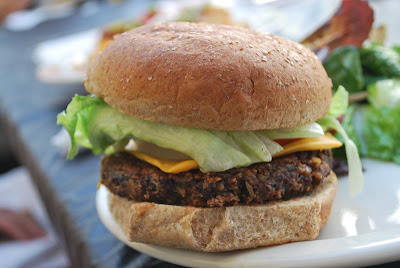 I made him give me a bite (okay, two bites), and I think it's the best veggie burger I've ever had. I used to think Huey's, a famous Memphis burger joint, had the best veg patties. But Fuel beats Huey's into the ground. Sorry Huey's. They even had vegan cheese slices to top the burger! And our awesome waiter knew all about casein and informed us that we should specify vegan cheese because they also carry soy cheese slices with casein.

Since we called ahead, the chef went totally out his way and created a Vegan Quiche that wasn't on the menu: 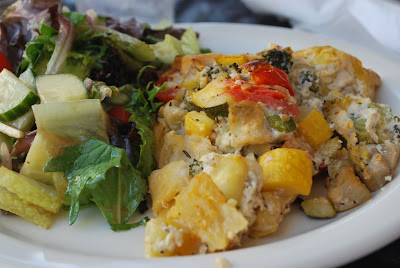 Now, they always serve a vegetarian quiche, but he made this one with tofu just for us. I took a picture of my friend Barbara's plate, but I was so involved in my nachos that I forgot to try it!

After dinner, our server announced that the chef even cooked up a vegan dessert for us — Apple Yum Cobbler with a scoop of Rice Dream!!! Unfortunately, I was too busy experiencing food ecstasy to remember to photograph it. But I don't think I've ever, ever, ever had a dessert that good. In fact, I was really too full to order dessert, but I took one bite of my friend Vaughan's dessert, and I made him give it to me. He had to order another. Seriously. I stole my friend's food. That's how good it was (or how bad I am).

By the way, we were there at lunch time, but the dinner menu looks pretty impressive too — vegan chili mac, vegan pasta of the day, and vegan tofu Thai curry! I see a dinner date in my future.

In case you're in town, Fuel is located at 1761 Madison. Call 'em at 901-725-9025 or check out their menu online. Oh, and this place is Project Green Fork certified, which means they recycle, compost, use green cleaners, and commit to sustainable business practices.
Posted by Bianca at 10:42 PM

Those nachos look great. My local vegan joint The Spiral Diner had a similar dish as a blue plate special...wish they would bring it back. Sounds like its a great place to eat. Enjoyed your post.

amazing! It's so smart to call ahead and so nice of the restaurant to really cater to you!

send me some of that apple yum dessert, i will pay for overnight shipping, cold packs, and the box!

Looks like a great restaurant - I hope they stay open until I make it back to town! Beyond incredible that they served vegan cobbler and ice cream, photo or not.

Wow, the restaurant really took care of you guys! The nachos in particular look AMAZING.

Those nachos are making my stomach GROWL!

fuel is my favorite restaurant, hands down! I tried the vegan thai tofu curry, its amazing, the tofu is deep fried and the curry sauce is dreamy with a great coconutty flavor.so glad you found this midtown gem and chef/co-owner Carrie is vegan!

This must be a great restaurant for vegans!

Everything looks so YUM

Very cool. I love that there are multiple options, and that look - blue plate gas station! I love happy surprises like that.

I so want to try that burger!! How awesome of the chef to create a vegan quiche just for you guys! That's how all chef's should be, not like those fuzzy diva chefs that refuse to accommodate vegan customers just because they can.

All of that food sounds great!

yum! someday i'll have to do a roadtrip to try all the veggie burgers outside of new york ;)