That was 1996 for me, which meant Airwalks, dog collars, and anything punk rock and kinda crazy. Honestly, I haven't changed much. I wore a punk rock prom dress, some Airwalks with skulls on 'em, a tiara (because it was my Sweet 16 party, right?), and a crazy green, purple, and yellow wig. I always wanted to dye my hair crazy colors when I was 16, but my mom wouldn't let me: 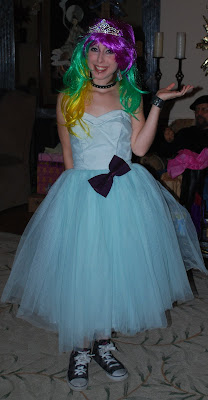 Stephanie (Poopie Bitch) told me she'd make my cake, a huge honor since she's a pro cake decorator and all. I told her to surprise me with the design, and look what she did! 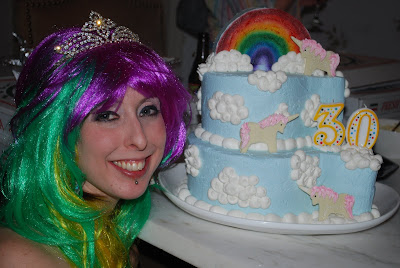 She said the first thing she thinks of when she thinks of me is rainbows and unicorns, and well, that pretty much sums me up. She nailed it. The cake itself was vanilla with the most delicious, fluffy buttercream frosting in the world. The unicorns were made of white chocolate. Can you really think of anything more magical that a freakin' white chocolate unicorn?

Stephanie also made cupcakes with funfetti sprinkles inside: 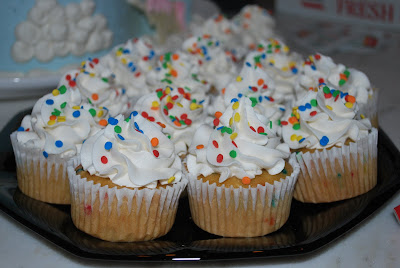 My friends Vaughan and Barbara hosted the party at their place. I've always thrown my own parties, so it was sooooo wonderful having someone else do all the work! They ordered a ton of cheeseless veggie pizzas from the Memphis Pizza Cafe and we added Tofurkey sausage and Daiya cheese. We also had chips and salsa, kale salad, and stuffed mushrooms: 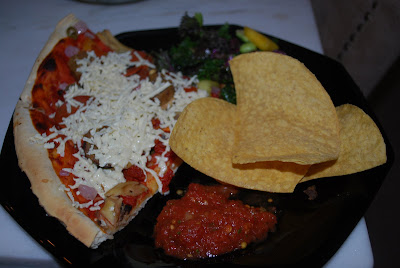 Here's a close-up of those scrumptious mushrooms, a gift from my pal Chef Timothy (a local vegan personal chef): 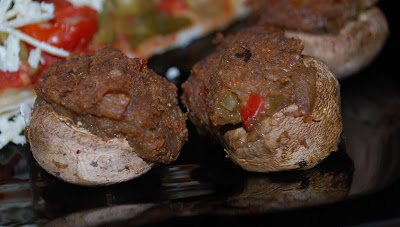 And the raw kale salad, loaded with all kinds of goodness (edammame, red cabbage, avocado): 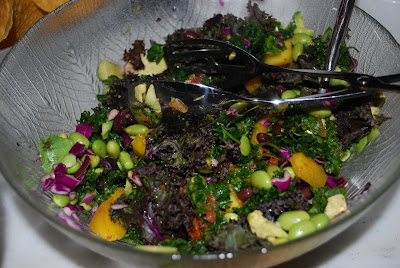 So many people showed up to celebrate with me, some in costume and some not. Barbara said she counted about 35 people throughout the night. I didn't even know I had that many friends! 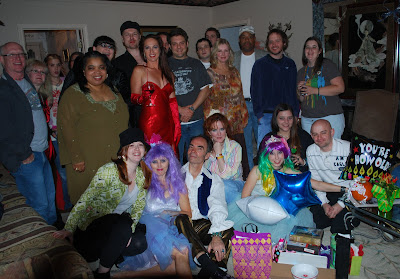 My 30th birthday party was by far the best party I've ever had! The entire day went off without a hitch. The cake was beautiful and amazing. Vaughan and Barbara threw a badass party. My BFF Sheridan came in from out of town. There was pizza. I got awesome gifts (a Tofu Xpress press, a zombie cross stitch kit, vintage dishes, faery Tarot cards, a flask, a skull purse, and so much more). I pretty much have the best friends in the world.

I spent today (the day after my birthday) with my family, and I'll post all the food and details from that get-together in tomorrow night's post.

Until then, I do wanna share one awesome link with y'all. An anonymous commenter left a comment on my last post instructing me to Google "I Love My Life as a Dickhead." I was, like, what? But I did it. Check out this video! It's a funny song poking fun at hipsters (love that!) and it mentions "vegan crunk" about 2 minutes and 25 seconds in. Ha! That's crazy. Love, love, love it!

Oh my goodness, I used to loooove airwalks, especially the sparkly plastic coated ones. Oh, the nineties.

Looks like such a fun party and a sumpremely awesome cake! I've seen wedding cakes that aren't nearly as nice!

Happy birthday to you and glad it turned out to be such a great one!!

Happy birthday Bianca! The party looked fab, hope your 30's are great for you!

I'm glad you had such a nice birthday! Love the outfit.

glad your big day was such a hit, seemed Crunktastic!

Incredible! I am glad you had a suitably awesome birthday!

Adore the cake and the outfit!! Happy Birthday!!!

Sounds like much fun (and delicious veggie eats) was had! Happy Birthday!!

Happy birthday! That looks like tons of fun and great food. I love the rainbow and unicorn cake.

Happy 30th! That looks like a great part, and I love your outfit! Hope this next decade is smashing!

That cake-and your costume-are incredible! It looks like you had fun. What great friends :)

awesome party! i love the theme and your punk rock prom dress is the best. those mushrooms look so good!

Happy Birthday! Looks like you had a great time. ;-)

Wow! Sounds like you had an amazing party! Belated Happy Birthday! And you I saw that vid a couple of weeks ago but I must have been out of it (or maybe I was in a hurry and didn't finish it) cause I didn't catch that. You're now officially a pop culture icon!

How cool! Looks like you had a great party!

happy birthday! What a fun night.. I love your prom get up

Welcome to 30! I love the cake! Oh, and it's not a real party until the kale salad arrives :)

Happy, happy birthday! Sounds like such a fun party. What a gorgeous cake, too! And I LOVED the multi-colored hair--who says you have to be 16 to have it?? ;)

Happy birthday, Bianca! What a great way to celebrate!!

I'm glad I finally returned to the internet world just in time to send you birthday wishes ;)

That is the most adorable cake ever! How sweet!

Nice dress and tiara, and I think the rainbow colored hair suits you beautifully, by the way! :P

What a great party, happy birthday! Those mushrooms look amazing, will you be posting recipes?

What a yummy vegan birthday party. ^__^

Happy birthday, dear Bianca! You look so cute, and the food looks GREAT!!

LOL to "Dickhead." My boyfriend showed me that the other day & we almost died laughing. It's so weird! I love that an anonymous commenter told you to Google that - and you did! :-D

Happy 30th! woowoo. Mine is coming up in January. Your 1996 sounds much like mine. I LOVE that cake and I'm glad you had a great b-day. Also, I've been loving the Dickhead video, ha.

That video is hilarious. I lived in a North London flat (not quite as hip as the East London flats but almost) and this fits my hipster friends precisely. I guess I'm also implicated in this because I "work in media" and am all about that vegan crunk but still...my glasses have prescription lenses!

Happy birthday! I just celebrated mine as well.

Great birthday!! I am just like you. I drag my bday out and want it to last forever. I tell anyone that will listen. Mine was October 18 and I wanted it to last all week.

Oh, dear..I am SO stealing that cake decorating idea for my daughter's next birthday. She LOVES unicorns and rainbows (she's 3.5 (obviously)). ;-)

Happy belated birthday! The 30's are alright. I've been doing them for 4 years now!

you look so cute! happy birthday!

this is one fun-filled birthday celebration! You can see and almost feel it on those photos... Nice party ideas... Let me share some of my 30th birthday ideas too for future reference...