"I Organize a Vegan Crunk Night"

Not a whole lot to say tonight, but I do have a yummy picture of my dinner to share — Creamy Cashew Mac & Cheese with Caramelized Brussels Pecan Saute: 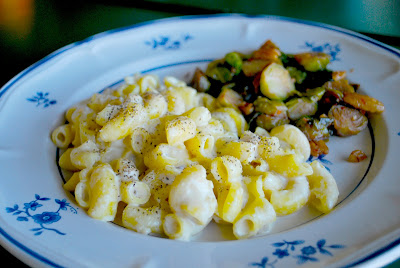 Both are testers for my Southern vegan cookbook, and I'm sure some of you have seen them before. I've made the macaroni like 500 times or something, just trying to get it right. Its finally there. I'm a perfectionist, so I make everything over and over, tweaking it every time.

Since I don't post on weekends, it'll be the start of Vegan Mofo when I return. In case you don't know, Vegan Mofo stands for "Vegan Month of Food." It's a tradition that started over on the PPK several years ago in which vegan food bloggers post as often as possible for a month. Usually, Vegan Mofo happens in October, but this year, it's in November. 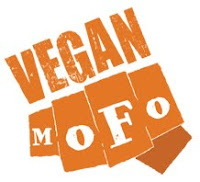 Nearly 450 bloggers have signed up so far. If you're interested in joining the vegan Internet revolution, click here. Or just stop by the Vegan Mofo Headquarters to see who's participating and make an effort to follow as many blogs as you can. Lots of folks come out of their cupboards for Mofo.

I'm gonna leave y'all with a catchy little dubstep sample called "Vegan Crunk Night" that I stumbled upon when googling my blog title. It appears to be an offshoot of the "Being a Dickhead's Cool" YouTube video that I posted last week.

A little background: The "Being a Dickhead's Cool" song/video is a hilarious jab at hipsters, and at the very end, a bespectacled hipster with a comb-over says, "I organize a vegan crunk night." Crazy. It's British, and I'm not sure if it's a reference to my blog or just some crazy coincidence. Click here to watch that video. Below is a short dupstep sample that I'm guessing may have been inspired by the Dickhead video. Who knows? I just found it while googling!

Dubstep, by the way, is a genre of electronica characterized by heavy bass and drum lines. It's pretty big in Memphis right now, although I believe it rose to popularity in Europe a long time ago.

Pretty sure you mean duBstep not duPstep. But anyway cool mix :) I hope you're going to send your cookbook to austtralia too, we're a Southern as you can get ... nearly!

That video was hilarious, btw. Is dickhead really the British word for hipster?

So excited for Vegan MoFo!

EEEE I heart dubstep; that's my scene right now :)
let me know if you want some free nashville dubstep to listen to; my friend Wick-It is AMAZING!

I love your blog and I will totally buy your cookbook when it is released.
<3

Effing love this song. Thanks for it, B.

And cannot WAIT for Vegan MoFo!

Haha! Yes, totally meant Dubstep! That's how I pronounce, but I guess I've never written the word out. Somehow I misspelled it twice in this post. I've made corrections.

Your mac and cheese looks so good! I can't wait 'til your cookbook comes out!

That mac looks delicious! It's lunchtime here and I'm wishing I had it.

Thanks for the heads-up about Vegan Mofo! I think I might participate now that I have a blog! :-)

Brussels sprouts!! I'd rather eat them than all the vegan Halloween candy in the world!

That's so funny (about the end of the song)!

Agree with Vegannifer. Brussels are my candy.

Pecans really do go with everything. Yum!

wow, I can't wait to try out your macaroni and cheese!! :)

Bring on the MoFo! I can't believe how excited I am about it - I should be all blogged out after all the Halloweegan stuff!