So November may be Vegan MOFO (month of food), but this past Saturday was Vegan DOFO (day of food) in Nashville. I joined Stephanie (Poopie Bitch), her husband Richard, and tiny Peter (the new Poopie Baby) on a three-hour road trip from Memphis to Nashville on Saturday for the Nashvegan Post Punk Kitchen Potluck.

I call it a DOFO because the whole day was all about food. We stuffed ourselves silly at the potluck, hit up Nashville's massive Whole Foods store and Trader Joe's, and then met for dinner at the all-veg Wild Cow restaurant. I think I ate enough calories on Saturday to sustain me for at least a week. In fact, we ate so much that I've decided to break this post into two days because that much food in one post would be positively sinful.

Let's start with Nashvegan Potluck. We gathered in Centennial Park, near this massive replica of the Parthenon: 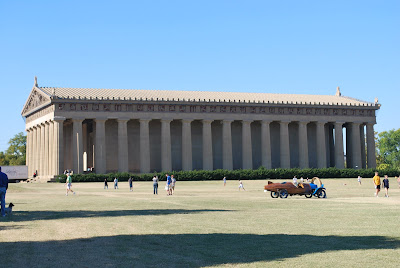 Lisa (Panda Cookie!!) drove all the way from Asheville, North Carolina to join us. And she brought Poopie Baby Peter a homemade monster! But Stephanie said she may steal it from her kid. I mean, he's only a few months old. He'll never know the difference, right? 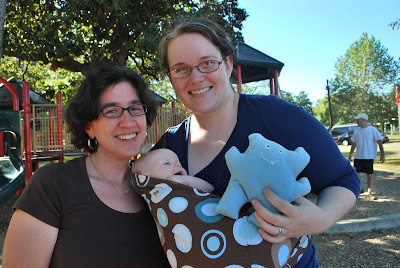 John P was there with his partner Tim, and so were Crystal (formerly Vivicious Vegan, now of That Vegan Blog) and her dude Marty. 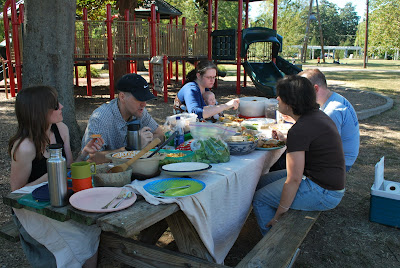 Even though there were eight people, we brought enough food to feed an army of hungry vegans. John P and Tim brought this crazy-awesome salad with Israeli couscous, fried tofu, fried onions, and a fantastic creamy dressing: 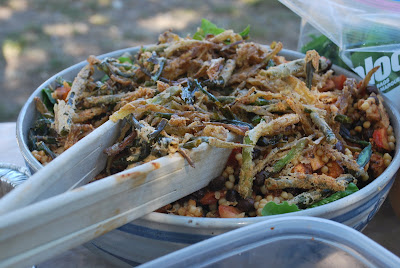 John P and Tim also brought my new favorite guilty pleasure — Okra Fries!!! These thinly sliced bits of okra are deep-fried and seasoned with a spicy stuff. Best thing ever! 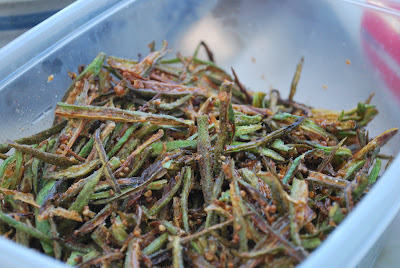 Crystal went with an Ethiopian theme. The yemesir w'et from Kittee's Papa Tofu was so, so delicious. In the background is Lisa's yummy macaroni salad (I took home the leftovers!): 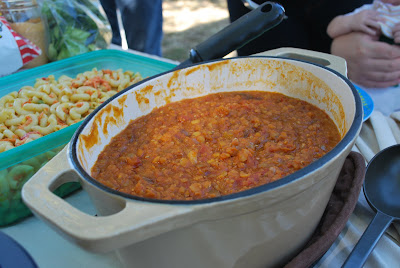 In keeping with her Ethiopian theme, Crystal also brought some African azifa made with brown lentils. Crystal made that recipe up all by herself! All that was missing was the injera to scoop it up. In fact, Crystal's homemade Ethiopian food is far better than any I've had in a restaurant: 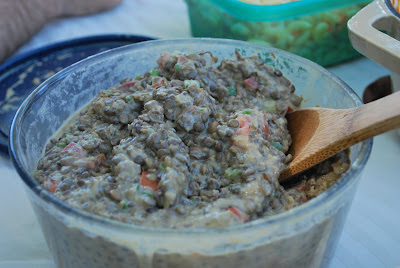 I brought my vegan Pimento Cheeze Spread with little whole grain bread triangles for finger sammiches, and someone (not sure who) also brought some delicious sesame rolls: 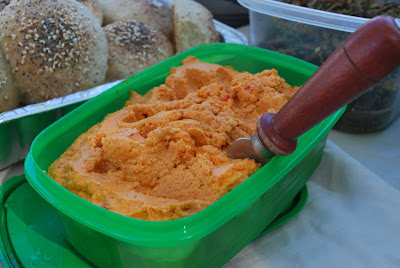 Stephanie went all out with this Caramelized Onion Quiche from Vegan Brunch — one of my fave dishes from that book btw. Look how Martha her fall leaf crust embellishments are! 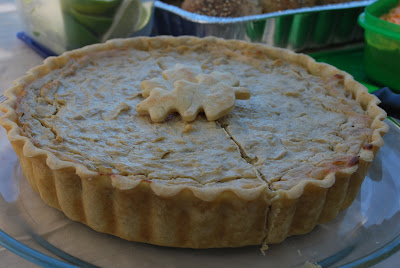 No proper PPK potluck could go without dessert! Stephanie apparently thought she would be feeding millions with her big ole tub of mini Java Chip Muffins from Vegan Brunch: 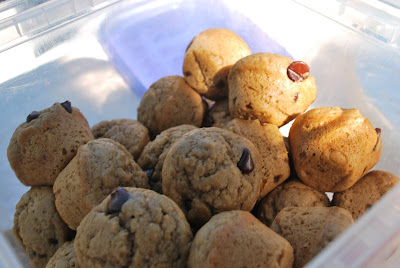 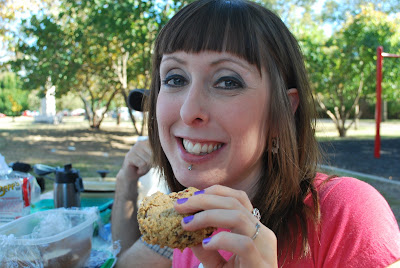 I made a coconut pie and Lisa made some butterscotch oat cookies, but I forgot to photograph them in my haste to stuff my face. Oops! Here's my plate, stuffed with as much as would fit: 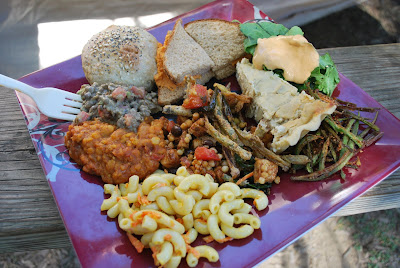 WOW! Sounds like an amazing day!!! Glad you had so much fun! -Aimee

It's a very nice picnic, fun and varied

Awesome photos! It was so fun to see you all. Salad Glory goes to Kim / Veg in Training - it was a test recipe for her current project.

I plan to bug the living daylights out of your publisher to hurry with the cookbook. The world needs your pimento cheeze

i want a potluck like this in Pgh so bad...the only ones we have are us and 1 or 2 other people we know...lol...that looks like one dope day you all had :D

Java chip muffins? Coconut pie? And getting to meet a lot of other vegans?!
Jealous much, Katie? Um yes, yes I am!

I ♥ Nashville and potlucks.

Everything looks incredible! I would love to try homemade Ethiopian food. I had some great lentils and collards in an Ethiopian restaurant recently. The okra fries and p'menna cheeze and cookies - wow!

Man, I'm in Johnson City. You could have added a few more hours to your drive and picked me up no problem. ;-)

squeeeeeeeeee for a super fun meetup and lots and lots of vegan gluttony! everything looks absolutely awesome - there's just so much goodness, you would have had to roll me outta there. ah ha ha! i love your plate loaded up with a good bit 'o everything. and might i add that i'm totally jealousfaced. :)

Sounds amazing!!! But then again, anything that includes a lot of delicious vegan food and awesome people sounds pretty grand (:

Ahhh I hate that I missed this day so much. I'm tired of my personal and professional life being so hectic that I can't even breathe. I had every intention of being here and I tried...Saturday was just a comedy of errors. I am so glad you enjoyed my city!! I need to send you a Nashville gift of good faith <3

This was such a delicious day. Is it wrong I already want to start planning our next one?

I'm with JohnP! If your book isn't out soon we're both going to be camping out at the publisher's and bugging them until it is.

So much greatness. The food looks amazing. Plus, I always love seeing PPKers!