... and I liked it. This is a major breakthrough for me. Raw kale has always been the final frontier of rawness for me. But more on that in a sec. Today was my monthly one-day all-raw food day, and it began with this yummy bowl of Banana Berry Bliss from 30 Minute Vegan: 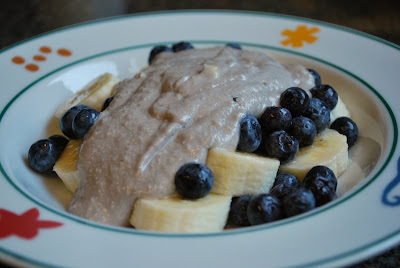 This recipe was really more like "5-minute vegan" since it took no time to whip up the banana-cashew cream (a variation on the recommended macadamia nut cream recipe). The sweet cream topped my fresh bananas and local blueberries (frozen from blueberry season earlier this year).

Around 11 a.m., my tummy was grumbling so I snacked on a few dried apricots, and by noon I was so ready for my big raw kale adventure with this Rainbow Kale Salad from 30 Minute Vegan: 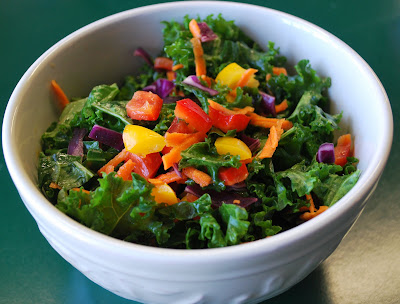 The kale is mixed with red and yellow bell pepper, red cabbage, and grated carrot and then massaged with a mixture of olive oil and other seasonings. Although the recipe suggested only marinating the kale for 10 minutes, I left it overnight. The result was tender, totally un-bitter kale leaves! I was always afraid raw kale would be bitter and icky like raw collards (which I hate!). But no. It was delicious!

Alongside the kale salad, I had some Zucchini Hummus with Crudites from Gena of Choosing Raw: 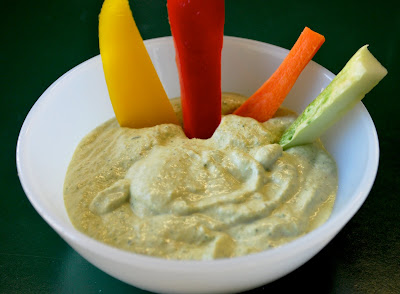 Gena's recipe is included in the latest issue of VegNews, but you can also find the recipe on her blog here. Raw zucchini replaces traditional chickpeas and I subbed Artisana raw cashini butter (I love this stuff!) for the roasted tahini. Super yummy!

Dinner wasn't very pretty, but it was tasty. I made this Live Hot and Sour Soup from 30 Minute Vegan: 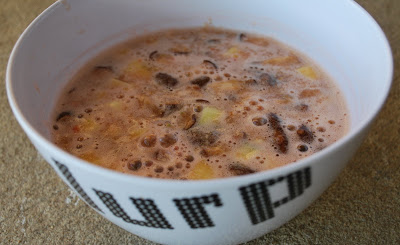 See, not pretty. But with a base of hot peppers, tomato, soaked apricots, and apple cider vinegar, it achieved a hot and sour flavor. The floaty bits are shitake mushrooms marinated in raw coconut aminos (like a raw soy sauce), fresh sweet corn, and diced zucchini. It wasn't half bad, but I probably won't make it again.

I also had a Garden Salad with Garlic Vinaigrette for dinner: 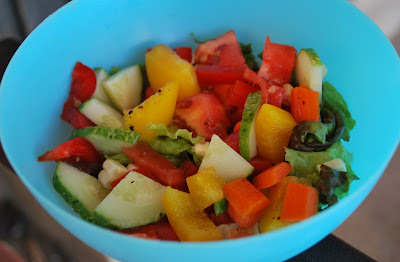 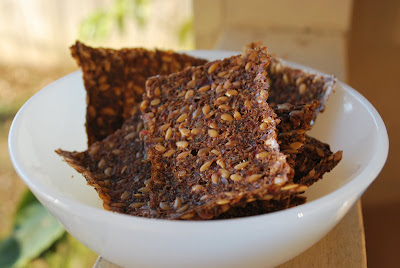 I made a HUGE batch of these from Becoming Raw! The recipe made about 130 crackers, and I had 10 with my meal. Luckily, these keep forever and ever in the fridge. Flax crackers are one of the raw food diet's most redeeming qualities.

Finally, the highlight of my day was dessert, which I had twice — once after lunch and once after dinner. You can do that when you're eating healthy raw dessert like these Raw Chocolate Cupcakes with Chocolate Ganache from Raw for Dessert by Jennifer Cornbleet: 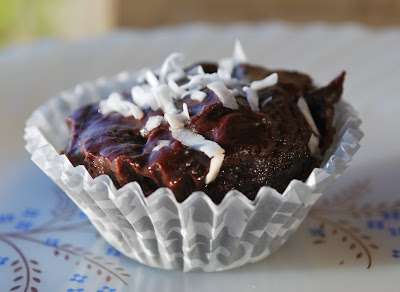 The mini cupcakes had a walnut-date-cacao base and they were topped with a rich, smooth ganache of coconut oil, cacao, and agave. Holy yum!

By the way, Cornbleet's Raw for Dessert is part of the Book Publishing Company's Luscious Vegan Dessert campaign. Throughout October, they're offering vegan dessert fans a chance to win one of several fab cookbooks, including Raw for Dessert. Click the Luscious logo for details. 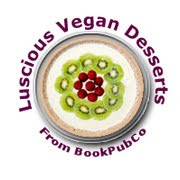 You ate raw kale?! Welcome to the dark side ;)

The salsa crackers look and sound so good!

I have yet to try raw kale. I've always been afraid that it would be bitter too. The banana berry bliss sounds delicious. I am definitely going to try making my own banana-cashew cream now.

lol raw kale is my heaven :) so glad you tried it, and even more, so glad you post about these all-raw days regularly!

i suggest you try a week to 14 days raw, and watch how your body responds...detox begins almost instantly.

yay for enjoying raw kale! i was super scared i wouldn't care for it either, but it turned out i also love it (i marinate over night as well). i also looooove smooshing up some avocado in the salad just before i enjoy it. so yum! banana cashew cream sounds absolutely heavenly and the raw cuppins cake - zomg, mmmmmmmm! i'm sold on the book. i'm sorry the soup was a little disappointing, but i'm glad Gena's zucchini hummus rocked. i'm gonna have to pick up some raw cashini butter, as i loooove Artisana's chocolate coconut butter and their raw tahini. :) another delicious raw day success, indeed!

Massaged kale just sounds so fun, I don't know how you held out for so long!

I love all the colors! And massaged kale is totally yummy, I'm glad you tried it :)

I looooove marinated raw kale! Massaged with tahini is just so amazingly delicious. So simple, but so good.

Looks like a really delicious day! I have both those cookbooks but haven't made any of those recipes. I especially love "30-Minute Vegan." I have to make that Hot & Sour Soup!

Ooh those are all recipes I've wanted to try from "30 Minute Vegan!" I love how much raw stuff is in that book. Looks like a great food day.

It's good to know that marinating raw kale makes it softer and less bitter. I love cooked kale, but have never had raw kale prepared in a way that I can handle.

Everything Look so good. I am so in love with raw kale, in face i've been eating raw kale salads for dinner every night this week! That hot and sour soup sounds very interesting, and the flax crackers look super tasty!

Massaged raw kale is great, but I really don't know why you feel the need to put so much emphasis on eating raw.

Ever read Jack Norris' fine take on the raw food fad? Jack has science on his side.

Thank God, you're stil alive! Just kidding. All your raw food looks amazing as usual. It's funny, in Germany kale is usually cooked for an hour, nobody would ever think of eating it raw. But I want that now!

MMmmmm....I love raw kale! I didnt know that was something one should have to build up to. I used to work at edible arrangements and my boss was the coolest, anyways, he let me bring home loads of veggies and kale...for myself, my foster dogs and my rescued chickens at the time. The dogs were not crazy about the kale (they like the fruit) but my chickens and I loved the kale. :)


I tried being raw a few times (each time was for a goal of just a few days at a time) but was soooo hungry the whole time...Seeing what you ate all day makes me think I just wasnt eating enough. This all looks soooooooo good! Makes me wanna try again. Do you wanna not cook for me? LOL.

Once you eat raw kale you can't go back! lol! The first time I ate raw kale as raw kale salad, I was hooked and actually started craving it.

Congrats on the raw kale. I love the stuff! For me, it's all about kale and nutritional yeast :) My two addictions these days. And the rest of that meal looks absolutely delicious.

If I do not have kale in the frig I get scared! Congrats! Great kale salad! I like mine with orange salsa - amino acids, red pepper, agave, orange juice and segments, green onions and garlic.

That kale salad is so colorful. I've never tried it raw either but you have inspired me to give it a go!

I really like raw kale and actually liked it before I went high-raw. I prefer it in smoothies, but at times munch on it plain. That brownie/chocolate dessert looks heavenly!!!

Very cool. That desert looks amazing. My favorite part about the 5 months that I spent 100% raw (now am about 2/3 raw and vegan) was that all the deserts I made could be eaten at any time of day without guilt. Yay!