I don't typically buy prepared convenience foods. It's not like I'm some health guru who shuns packaged foods. I'm just really, really cheap. And vegan convenience foods tend to be pricey for the quantity of servings. I can make a big ole batch of soup or chili and freeze portions for quick lunches and dinners to save some dough. That being said, I'll never turn down free convenience foods to review!

Tasty Bite, maker of 10-ounce shelf-stable microwavable Indian meals, offered me samples of three entrees, some basmati rice, and an Indian simmer sauce. I'm breaking the reviews into three posts (peppered over a few weeks) so I can try items at my convenience. Last night, I tried the Tasty Bite Bombay Potatoes and Basmati Rice: 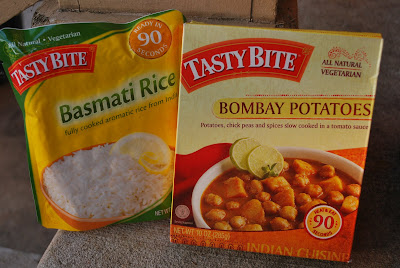 The Bombay Potatoes are slow-cooked with chickpeas and spices in a tomato-based sauce: 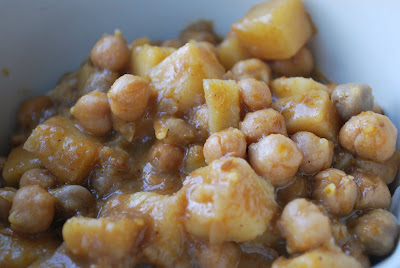 They were so, so yummy served over the pre-cooked rice, and dinner was on the table in less than three minutes! The cubed potatoes reminded me a little of the taters in military MREs (meals-ready-to-eat), which I ate during an ROTC Hiking and Backpacking class trip in college. I know it sounds weird, but I LOVED the texture of those potatoes.

The texture of rice was no different than if the rice had been cooked on my stovetop, yet I only had to microwave the package for 90 seconds! Although Tasty Bite makes packaged foods, the ingredients are really simple with no preservatives. The Bombay Potatoes ingredient list reads: Water, potatoes, chickpeas, tomatoes, onions, sunflower oil, salt, ginger, garlic, cornstarch, coriander, chilies, cumin, and spices. All ingredients that I can pronounce!

Today for lunch, I tried the Punjab Eggplant: 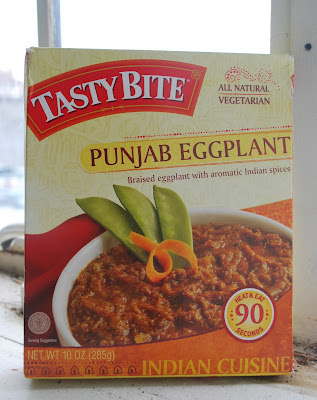 I only used half my basmati rice last night, so I ate the rest with this braised eggplant dish simmered with aromatic Indian spices: 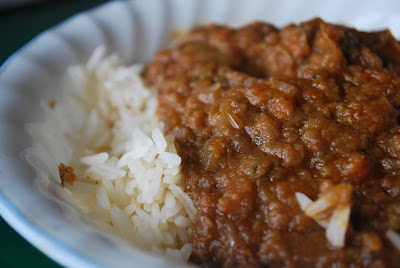 I hate eggplant skin, and I'm often not a fan of packaged foods with eggplant because the skin is sometimes left on. But this eggplant dish is pureed into a stew perfect for serving over rice. No skin involved.

The boxes of Tasty Bite say they serve two, but I'm a hungry girl. I only got one serving from each package. But they're fairly low in calories and fat even if you eat the whole thing.

My one complaint? Not enough heat. One thing I love about Indian food is the spicy-spice, and the Tasty Bite meals seem to be seasoned for less hardcore palettes. But that's no biggie. I can always add hot sauce!

I doubt an unsuspecting eater would even know these dinners were pre-packaged, especially with the eggplant dish and rice. But I'll probably only buy Tasty Bite for quick travel meals since they're a little on the pricey side at Whole Foods. Or maybe I'll buy some when I get a serious craving for Indian food and I'm too cheap to go to a restaurant.

Question: Are there any vegan convenience foods that you can't live without? What packaged items are you willing to splurge on?
Posted by Bianca at 11:02 PM

Tasty Bite is generally awesome! And while they may be a bit pricier than homemade food, I pay around $2 for a box, and that's way cheaper (plus pita bread or naan) and stash them in my desk for when I didn't plan for lunch at work. It beats a trip to a local fast food joint on both taste and price!

I love Tasty Bite! I am totally willing to splurge on the Amy's Mac and Cheese made with Daiya and on their tofu scramble and hash brown meal. So freaking good!

i've seen those, but never bought them. like you said, the price just doesn't seem worth it. the only convenience foods i really splurge on anymore are amy's burritos (can't get enough of that spinach/tofu one), but the only place i can buy them is 20 minutes away, so i rarely even get those. unless packaged hummus counts as convenience food? i still buy that, even though the homemade version is so easy and cheap.

also, happy belated birthday! i always make mine last the better part of a week, too. looks like yours was filled with boatloads of amazing food!

I love Tasty Bite's garlic ginger chickpeas! I got a "big box" ( I believe it was 4 packs) at Costco for fairly cheap. So tasty and easy to throw in wraps or salads.
Hmm.. favorite packaged splurge? It would have to be those Gardein 7 grain crispy tenders. They're a little more affordable if I can find them in the giant 40 piece bags!

Someone actually gave us some Tasty Bite packages they bought - they tried one and didn't like it and handed it off to us. I actually really enjoyed them (the ones I could eat). I think they also have a pretty cheap dahl mix. anyways, i agree about the lack of spice!

anything that needs a microwave is certainly not advised by me...but you know that ;)

one time my gramma gave us a package of some sort of Tasty Bite chickpea product, and since we didn't wanna microwave it we just opened the package and ate it at room temperature. it was tasty, i must admit. but unlike you, i fully shun prepackaged foods and anything with a shelf life of more than a week.

Tasty Bite is great for backpacking!

I LOVE the Tasty Bite vegan dishes. Bombay Potatoes are one of my favorite. I also like the lentils and veggies dishes. My 12-yr old vegan will also eat them. That is the plus side to them not being very spicy; he claims not to like things too hot. ;-)

We only buy them when they are on sale which usually means 2 for $4 or 2 for $5 here. Served over quinoa, rice, or bulgur, they do feed us both quite well, but I've been known to eat the whole box myself, too. :)

wow...all positive reviews...i do like some packaged products...amy's, tofurky, veggie burgers
but i just tried one of these last night for the first time and it was gross....i tossed it...

Original boca burgers and the boca chik'n burgers. The spicy ones are quite awesome. We buy daiya and tofutti slices, better than cream cheese and veganaise. I guess those are more ingredients than "pre-packaged" foods. If I forgot lunch I'll sometimes buy the microwave rice packs (uncle ben's, I think?) from the local grocery, most varieties are vegan.

I'm completely addicted to Indian shelf-stable meals. There are a bunch of different brands at the Indian market near me - at $2, it's pretty hard to beat them for a convenient, reasonably healthy meal.

I've seen these Indian pouches and always been curious but too skeptical to try them. Lately my convenience food has been Primal Strips - perfect stress food with the salt and chewing, but at more than a dollar for a quick snack certainly a splurge.

I used to eat the kidney bean one (can't remember the proper name), but got burned out on them after awhile. Plus, sometimes they'd be over-mushy.

My friend said she lived in Tasty Bite when she was at Burning Man last year.

My favorite convenience food is definitely Field Roast Apple Sage Suasages; quickly followed by the amazing and locally made Soysage in Hot flavor. Everything else; besides bread, pasta and crackers; I tend to make from scratch. I would probably make those things from scratch if I didn't have so many affordable, locally made options.

I always have a few of those Indian packs on hand. Husband is from Chennai and they are are easy to stash at work or take on camping trips.
Word: I buy them at the local Indian store for 99 cents each!!!!!

I think I've only tried a Tasty Bite product once, but I remember liking it. My favorite convenience food is probably Hickory Smoked Tofurkey slices. Every once in a while, I MUST have a Tofurkey sandwich.

Tasty Bite goes either way for me. Most of them I've tried needed a ton more seasoning for my taste. The exception is the Punjabi Eggplant, which we obliterate is seconds after opening. It's great as a dip too!

I like to keep vegan/veggie burgers on hand. Unfortunately I am not a huge fan of Indian food from a box. But, I have tried tasty bite products before and they are pretty good :)

Hey, I have that punjab eggplant thing sitting in my pantry! I'll try it for dinner tonight.

OH! I love tasty bites! I haven't had them in some time, but my favorite is the Jaipur Lentils!

I love the Tasty Bite entrees with chickpeas and potatoes and also the yellow lentil one, can't remember the "official" name. I should try the eggplant though, sounds good with some extra spice added! They're great for taking on trips. I find them on sale at Henry's and stock up on a few at a time. My other favorite is Amy's vegan enchiladas, which I think tastes just like Trader Joe's Black Bean & Corn enchiladas. So yummy for "fast" food :)