After a two-year pandemic break, Memphis in May's Beale Street Music Festival was back this year! We used to go to Music Fest every year, but I skipped the last couple before COVID because the line-up wasn't really impressive to me. But this year, most of the bands were from the 90s, and that's my era. My friend Misti, who lives in Fayetteville, Arkansas, made the drive to Memphis, and we saw Memphis rappers Al Kapone and Three 6 Mafia on Friday. Three 6 was definitely one of the highlights for both of us! There are few things I love more than Memphis crunk. 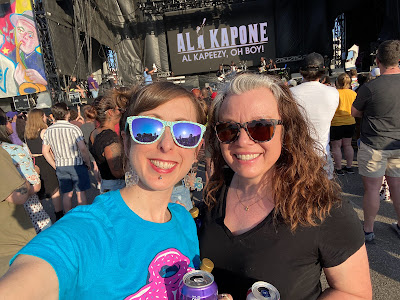 I didn't eat at the fest on Friday since we got there after I'd eaten dinner. But on Saturday, I found some food shortly after we arrived. In years past, the vegan options were few and far between, but this year, they had a few totally vegan vendors. One was Rich Health, where I ordered this Mushroom Madness — waffle fries topped with fried mushrooms, coleslaw, and BBQ sauce. So good! 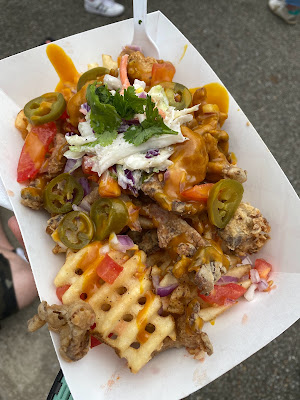 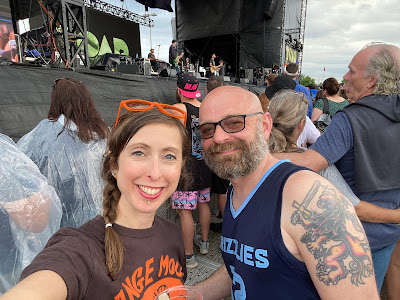 We listened to the Stone Temple Pilots while waiting in a very long beer line (but I didn't mind that we couldn't see them from there; they're not the same without Scott Weiland). Later, we saw part of Death Cab's set before a storm came through and forced an evacuation of the park. The Smashing Pumpkins and Megan the Stallion were scheduled to play at the end, and their sets got pushed back to 1 a.m. By then, we'd already given up and gone home. Oh well.

On Sunday, we got there in time to see the Indigo Girls, and then we headed to the blues tent for a while. Paul was hungry, and there was a burger stand next to the tent. I'd planned to seek out another totally vegan vendor for dinner that night, but I was also hungry and Bubba's Burgers had a Vegan Black Bean and Quinoa Burger, so I went with that because it was easiest. And you know what? It was pretty good. They had a burger fixings bar, and it was fun to add my own toppings. Plus, I like to support non-vegan vendors who have vegan options. 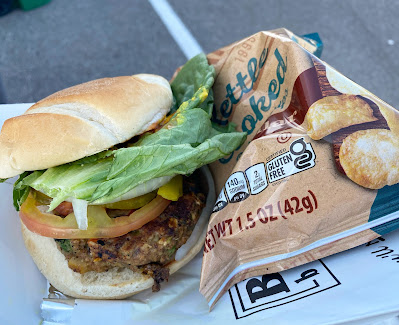 Later, we passed the Rich Health booth again. I wasn't hungry, but I wanted to support them. So I bought their Vegan Peach Cobbler. 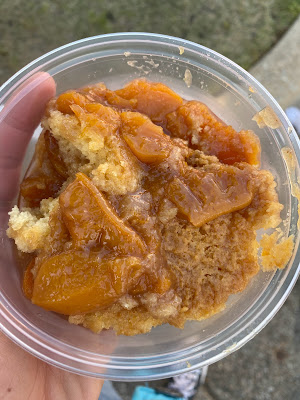 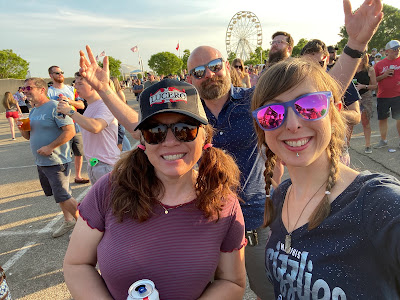 We met up with my friend Shara later to see Modest Mouse, and then we headed over to see The Counting Crows. Y'all. This show was so magical. I was most excited about seeing them because I'd never seen them live, and Adam Duritz and the band put on such a good show. I missed most of Weezer to see the Counting Crows, and that was kind of a bummer (who decided to schedule those two at the same time?), but I've seen Weezer several times. 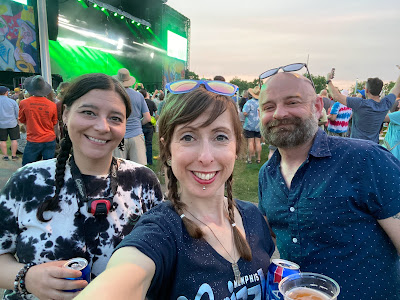 We had a great weekend! I'm running on fumes today after a weekend with lots of fun and not enough sleep, but it was worth it.
Posted by Bianca at 6:30 PM

Fun weekend!I love 90's music too. How is Paul doing? He looks all healthy and recovered. Love your sunglasses especially the orange ones.