I had a few coupons for Wicked Foods items, which are kinda pricy, so I figured I should use them before they expired. I got the Korean Style M'shroom Shreds, which are pre-seasoned mushroom shreds that you can use however you want. The package suggested serving with sauteed cabbage and peas over rice, so that's what I did! I sauteed some savoy cabbage with the mushrooms, which had a nice sweet and savory flavor, and then I added peas at the end. I used white rice for this because it just sounded better than brown in this dish. So good! The only thing I didn't like about the Wicked Foods meal kit was that it only made one serving, so I didn't have leftovers. 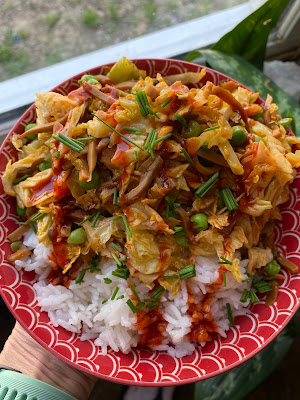 My mom picked me up some Upton's Naturals Hot Dogs recently. I love Upton's but hadn't seen their hot dogs for sale anywhere yet. These were really good! I topped mine with mustard and pepperish relish and served with some potato salad on the side. 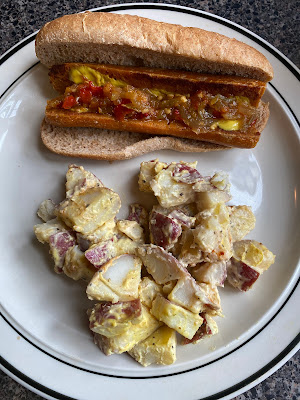 I follow vegan bodybuilder Nick Squires on Twitter, and the other day, he posted his dinner, which was a stack of Taco Bell Black Bean Crunch Wraps. He famously eats a LOT since he's a bodybuilder, and I love seeing his giant meals. The post got me to craving Crunch Wraps, so one day after a long run, I headed to my neighborhood Taco Bell for a Black Bean Crunch Wrap with no cheese and no sour cream, add guacamole and potatoes. So good. I love how vegan-friendly Taco Bell is! By the way, there's no good way to take a photo of a Crunch Wrap. 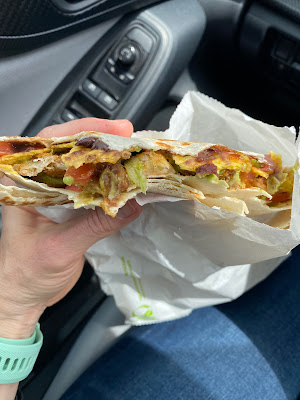 Omg. It's been so long but I used to eat SO MUCH Taco Bell! Now I'm craving it... these crunch wraps look good.