This post is very topical this week since it's World Championship Barbecue Cooking Contest week in Memphis. Of course, that event is very un-vegan-friendly. But I recently got to sample some Barvecue Pulled BVQ, and I wanted to tell y'all about it. A fellow vegan friend who owns the local Grind City Grocer sent me home with a free package to try. Grind City Grocer is a boutique grocer that mostly sells made-in-Memphis products, but they also carry a few vegan items that aren't local (but aren't sold anywhere else in Memphis). 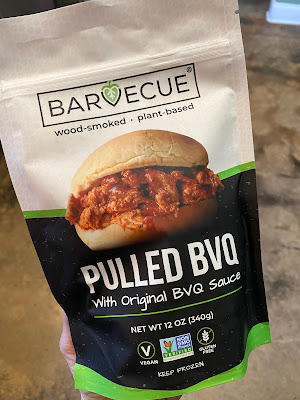 The Pulled BVQ is soy protein-based, and the texture reminded me a lot of Soy Curls (which I adore!). The chewy protein strips are wood-smoked and then coated in a tangy barbecue sauce that tastes a lot like a classic Memphis 'cue sauce. Barbecue sauce varies by region, but ours is vinegar-y with a touch of sweetness. 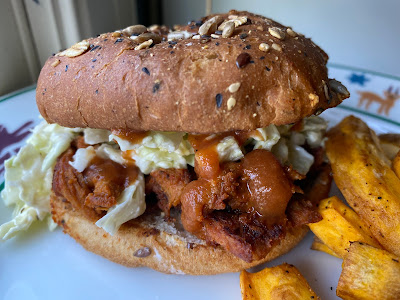 To serve, I whipped up some coleslaw with savoy cabbage and vegan mayo (that's it!) and served on a whole wheat bun. The package said it had six servings, but I made it into three. I like big portions. I made a couple of sandwiches, and I had the last of of the BVQ on a salad with vegan ranch.