Meals from The Blue Zones Solution!

Because I'm a bit obsessed with No Meat Athlete, I've also become a little obsessed with The Blue Zones — Dan Buettner's series of books on the world's longest lived people and how to replicate their healthy habits so we can live past 100. The NMA folks are big Blue Zones fans, and I read Buettner's first book on the five Blue Zones (Loma Linda, California; Sardinia, Italy; Ikaria, Greece; Nicoya, Costa Rica; and Okinawa, Japan) a while back. Those are the places that have the highest percentage of centenarians.
One thing all of those places have in common is that the people eat a mostly plant-based diet, so Buettner's next book, The Blue Zones Solution, dives into the eating habits of each country and includes a few recipes. The recipes are not all vegan, but about 3/4ths of them are. I've been cooking my way through the book, and here are a few things I've made.
My very favorite so far was Panchita's Gallo Pinto, a black bean and white rice recipe from centenarian in Nicoya. I served it with Avocado Salsa from the Seventh Day Adventist recipe section (Loma Linda is a Blue Zone because of the plant-based Seventh Day Adventist community there). The avocado salsa was insanely good! It had olive oil, chopped avocado, olives, corn, garlic, onions, and peppers. 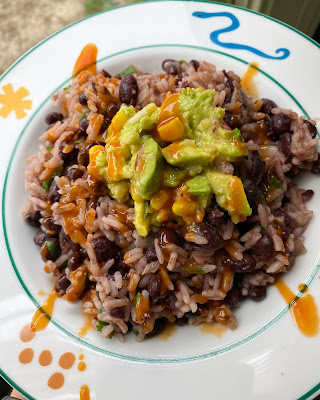 Most of the cultures featured use olive oil pretty heavily, so the recipes are quite different from the oil-free way I've cooked in the past. But hey, if people are using that much olive oil and living past 100, I'm here for it!
The book also includes some very basic recipes, like the general one for dry beans in the slow cooker. I used it to make these White Beans (just beans, herbs, salt, pepper, and water), and they were perfect. I had them with some collards and my mom's homemade vegan chicken dressing (which I had stashed in my freezer). 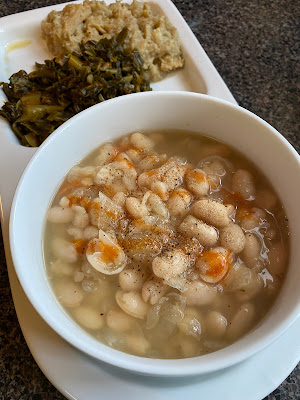 From the Okinawa section, I tried this Longevity Stir-fry! It has tofu, green beans, mung bean sprouts, and cabbage, and it was very simple and tasty. 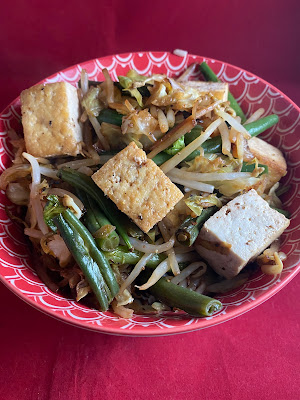 All week this week, I've been eating these Ikarian Baked Chickpeas with Horta. The chickpeas are made from dried beans and then baked with herbs, zucchini, carrots, onion, and olive oil. The Ikarians eat a lot of chickpeas! And they also eat wild greens called horta that are just blanched and drizzled with olive oil. Since we don't have wild greens growing around here, Buettner recommends trying this with kale, which I did. Very tasty and healthy! 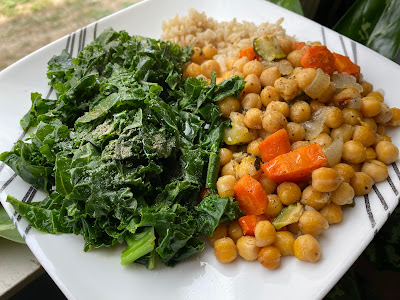 Two other things I've made that I don't photos for. The Sardinian White Bean Smash was like hummus without tahini and with lots of garlic. I loved that! And I also tried the basic recipe for Adventist Slow Cooker Oats made with steel cut oats. It was nice to wake up to oats prepared in the slow cooker!
Buettner has since released a whole Blue Zones Cookbook, but I don't have that yet. Definitely on my list! I'm currently reading his book Thrive: Finding Happiness the Blue Zones Way, which is about the world's happiest countries (which are not the same as the Blue Zones for longevity.
Posted by Bianca at 6:30 PM

A few places I have eaten at in the past have had Blue Zone means, which was cute.