Anyone who reads this blog knows I'm a No Meat Athlete super-fan. I credit NMA podcast hosts Matt Frazier and Doug Hay for inspiring me to dream beyond the marathon and to move from roads to trails. I didn't know ultramarathons were even a thing before I started listening to their podcast. NMA also helped me find a healthy balance between vegan junk food and vegan whole foods. In short, their work has been life-changing for me.

So of course I was stoked when The Plant-Based Athlete, by No Meat Athlete founder Matt Frazier and vegan bodybuilding legend Robert Cheeke, came out in mid-June! It's quickly become my official manual for how to be a vegan athlete! And by "athlete," I'm talking about everyday athletes. Although the authors interviewed 60-plus elite and professional plant-based athletes for the book, the practical advice offered is intended to help aspiring young athletes and older weekend warriors like myself. 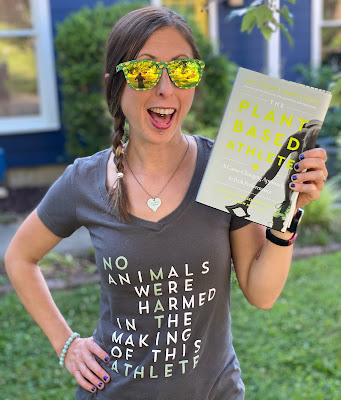 I'm currently training for two 50K races and a marathon this fall, and I've got one solo 50K, four full marathons, and numerous half-marathons under my belt. I practice yoga daily, and I strength-train a couple times a week. But I'm not out there winning races (or even age group awards). I'm a slow runner, but I still consider myself an athlete, and this book is loaded with practical advice (and recipes!) that are already helping me make the most of my training.

Matt and Robert take a deep dive into macronutrients (carbs, fat, protein) and supplementation, and then they provide meal plans for various athletic goals, such as fat-burning or muscle-building. I love that they not only tell you how to eat, but they offer guidance on what to eat for optional workout fueling. The section on recovery is fantastic with suggestions on the best plant-based foods to reduce inflammation, and they break down carb-to-protein ratios for snacks/meals eaten before, during, and after your workouts.

There's even a "day in the life" section where some of those athletes detail everything they eat in a typical day (including their pre- and post-workout meals). It's so cool to see how much those individual meal plans vary from athlete to athlete! It really does prove that every body is different!

My very favorite section of the book is at the end — the recipes! There are more than 60 plant-based recipes, contributed by the athletes featured in the book. So far, I've tried quite a few, starting with the Kale Yeah Caesar Salad from marathoner Mary Schneider. This has roasted chickpeas, nooch, hempseeds, and a tasty caper-y avo dressing! Perfect lunch! 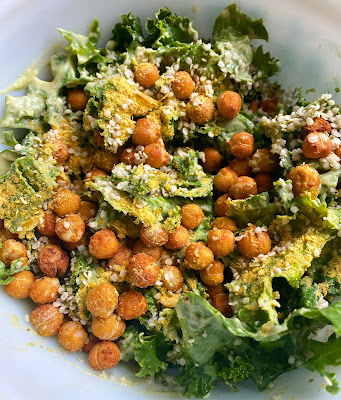 I also made ultramarathoner (and Vega founder) Brenden Brazier's Chia Seed Maple Blueberry Pudding. This was a standard chia pudding and made for a nice breakfast on a hot summer morning. I loved the crunchy slivered almonds. 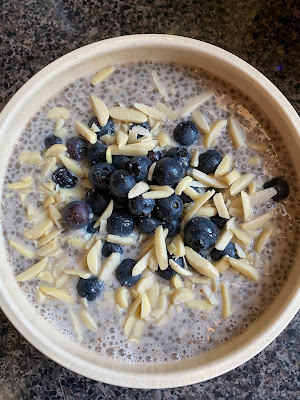 Mountain biker Sonya Looney's Champ Oatmeal is a classic! Steel cut oats with flax, blueberries, and hemp seeds. Can't go wrong with that, and those are items I always have in my pantry. 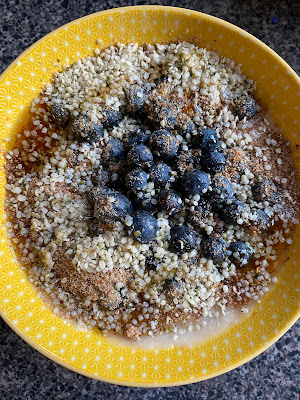 Triathlete (and Engine 2 guru) Rip Esselstyn's Rip's Big Bowl makes a VERY filling breakfast! This has unsweetened shredded wheat, rolled oats, Ezekiel cereal, walnuts, raisins, flax, grapefruit, kiwi, and banana. It also called for Uncle Sam's cereal, but I couldn't find that. That was okay though because I could barely finish this bowl as it was. It's absolutely delicious, but one serving is very, very filling! 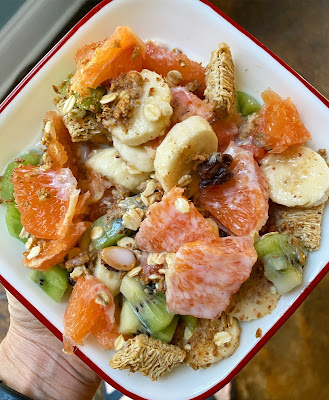 My favorite breakfast was bodybuilder Korin Sutton's Vegan Omelet! This uses Just Egg for the omelet base, and it's stuffed with peppers, kale, onions, shiitakes, and Field Roast sausages. I appreciate that the book includes mostly whole plant recipes with a few indulgent things (like plant meat and Just Egg) thrown in. It's nice to know that even pro athletes eat processed foods sometimes! 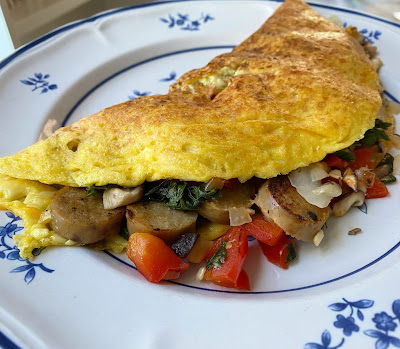 Last night, I made Robert Cheeke's Curried Chickpeas for dinner. I'd heard co-author Matt say in an interview that this was his favorite recipe from the book, so I had to try it. And I think I agree! So far, the omelet and these chickpeas are tied for my fave. The combo of potatoes, chickpeas, curry powder, tomatoes, and spinach is just perfect. 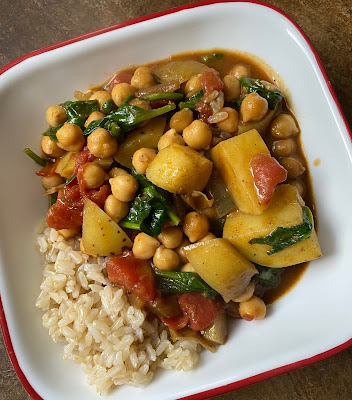 Later this week, I'm trying Robert Cheeke's Bodybuilding Burrito Bowl, and I've got Matt's Raw Frozen Banana Truffles bookmarked too! I've long had a goal of making every recipe from Matt's No Meat Athlete Cookbook (I'm about three-fourths of the way there!), and I plan to make every recipe from The Plant-Based Athlete as well.
I finished reading this book this week, and I cannot recommend it enough! If you consider yourself a vegan athlete (or know someone who does), get this book!
Posted by Bianca at 6:30 PM

Wow! This book sounds great (and I love your shirt btw.) I'm getting it! I have the NMA cookbook and don't use it as much as I should. I'm on vacation in Austin TX right now, and we are eating our way through every vegan food truck in the city (or at least, attempting to.) When I get home I'll definitely need some nice healthy recipes!