Slim & Husky's, a Black-owned, hip-hop-themed, Nashville-based pizza chain, opened a Memphis location in December 2020, and they have a vegan sausage and pepperoni pizza! I've been meaning to try it for months, and I finally got there last night! Y'all, it is SO GOOD, and I am kicking myself for waiting this long.

The Nothing But a V Thing pizza is made with classic red sauce, vegan cheese, fresh spinach, plant-based pepperoni, plant-based sausage, mushrooms, and red onions. You can choose up to two drizzle sauces when you order, and I went with the balsamic molasses. As far as I know, this is the only place serving vegan pepperoni in Memphis! 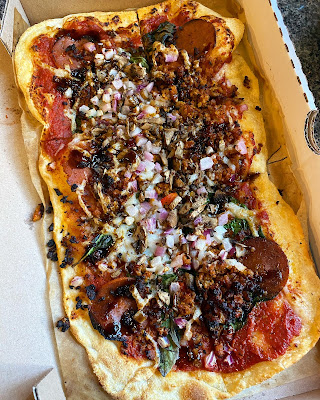 I've since learned that their garlicky garden butter drizzle is also vegan, so I'll definitely be trying that next time! I picked balsamic because I knew that would be vegan, but a friend told me later that the butter is vegan. YAY! That said, the balsamic was an excellent complement to the savory pepperoni and sausage pizza.

The crust is amazing!! It's super-thin but still chewy. I like thin crust, but I'm not a fan of cracker-thin. I like it chewy and thin, which is hard to find.

I also loved their ordering system. They have one door for dine-in customers and another for pick-up customers. You can place your order online, pay online, and just pop in that side door for a quick pick-up. I placed my order from my phone in the Kroger parking lot after getting some groceries. I got a message saying my pizza would be ready in 20 minutes, and when I arrived, it was ready! Perfect!

There are other vegan options as well! They posted an article on their website that lists all the vegan options, and those include the Hot Boy Salad, a Bean Ragu for build-your-own pizza toppings, boozy frozen drinks, and more!

Slim & Husky's is owned by Clint Gray, Emanuel Reed, and Derrick Moore, who were roommates at Tennessee State. They had a vision of opening a hip-hop/art-themed pizza parlor (and beeria, as it's called), so they opened their first location in Nashville. The Memphis location is their seventh location across the U.S.

I can't wait to go back and dine in with some craft beer!

Oh my goodness that Nothing But a V Thing pizza had me cracking up! Now I can’t get Snoop Dog/Dr Dre out of my head. Looks very yummy.

What a cool place! I love the term "beeria" and that pizza looks amazing! Where are the other locations?

That pizza looks so good!

I have such a big list of places in Brisbane I mean to try, and I know when I get there I'll also be kicking myself for taking so long. Such a burden to be a vegan surrounded by so many options of places to eat. ;)