I love summer!! And to me, 4th of July is the epitome of summer fun. Grilling, beer, fireworks. I'm here for all of that. Since the 4th fell on a Sunday, I started my day with a one-hour recovery run to my super cheesy 4th of July playlist (yes, Katy Perry's Firework is on there). Afterward, I cooled off in the pool with a beer. We recently ordered a large kiddie pool, and I've been loving it! It's just big enough to sit in with a drink, but that's all I ever do in pools anyway. 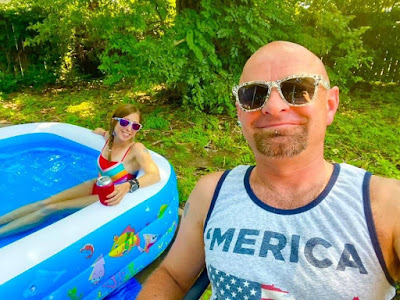 Then we got the grill fired up! I made a Fry's Family Foods Big Fry Burger and served it on a LuLu's bun. LuLu's makes the best, soft potato buns. 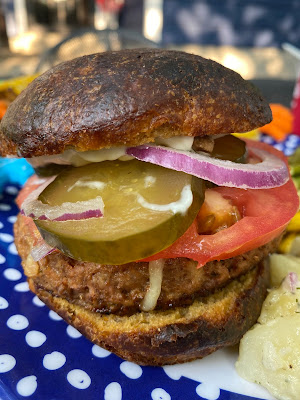 We also grilled corn on the cob, asparagus, and summer squash, and I made some potato salad using some tiny red potatoes that I grew myself. A few months ago, I put a sprouting red potato in a pot of dirt, and it grew more potatoes! I knew that was a thing, but I'd never tried it. And I was really amazed at the potato magic. 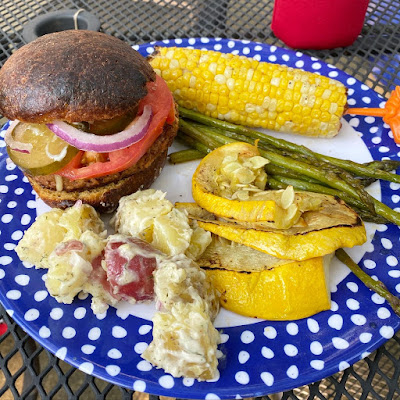 For dessert, we had fresh watermelon with Tajin! 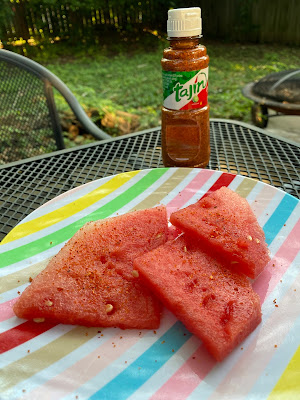 After grilling, we picked up my friend Andy, and we went to Grind City Brewing to watch the downtown fireworks. Most years, we find a spot on the river bluff to watch the free city fireworks, but it's always a nightmare to find parking. And then traffic is so bad getting back home. But we found out that Grind City was staying open late for the fireworks, and they're just north of downtown, so we could still see the show from there. While we weren't as close as we typically are, we got to see so many independent fireworks shows in North Memphis that were happening simultaneously. We were surrounded by fireworks!! 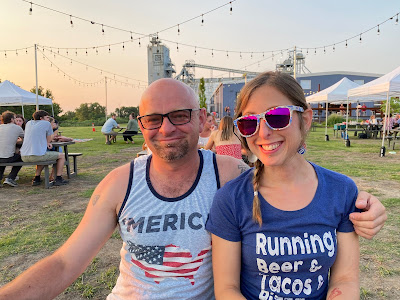 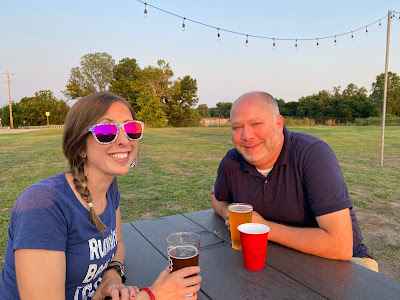 Plus, there was beer! And no traffic! Grind City wasn't even that crowded. I started with a Fanny Pack Surprise India Pale Lager. 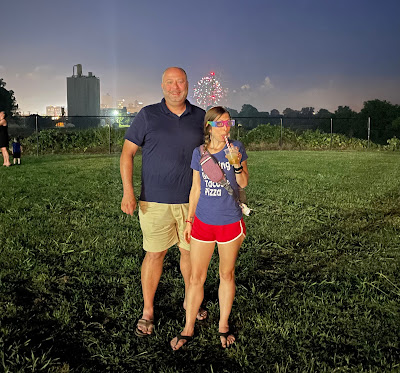 And then Andy and I both ordered the beer slushees! I had the Orange Creamsicle Slushee, which was made with their orange cream beer (it's not made with dairy!).
Yay! Go America!
Posted by Bianca at 6:30 PM

Oh my goodness I cannot believe you grew your own potatoes! I am very impressed. I bet they were delicious. So jealous.

Really appreciate you sharing this blog article.Really thank you! Will read on대구오피