Switching to a Vegan (Dog) Diet!

I've finally decided to put our rescued pit bull Maynard on a vegan diet! When we first took him in in 2012, we had another dog (Datsun) and six cats, and I just couldn't afford to feed the dogs a vegan diet. Then, Datsun passed in 2016, and I just kept Maynard on the non-vegan kibble they'd been eating. But in the past year or so, I've noticed his gas has gotten much worse. It may just be that, with working from home during the pandemic, I have far more opportunities to smell (and hear!) his farts. But either way, I knew he couldn't be comfortable with all that gas.
I foolishly decided to try the grain-free, high-protein foods that some swear are best for dogs. Bad idea! Those foods made the gas much worse (and much smellier) and resulted in diarrhea (even after slowly easing him into new food). So then, a few weeks ago, I pulled my Vegan Dog Food book off the shelf and baked Maynard a vegan casserole. 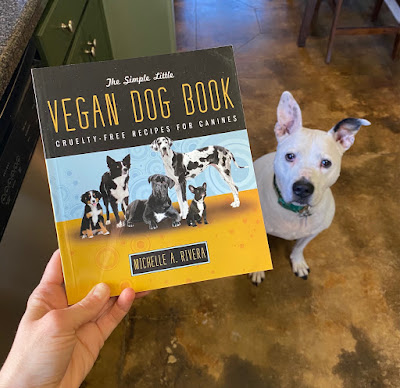 He loved this very unappetizing-looking casserole of barley, lentils, and whole wheat flour! It lasted for a few days of meals, and guess what? No gas! No diarrhea! 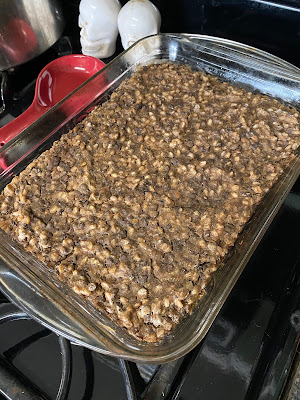 Next, I tried another recipe with beans, brown rice, and pumpkin puree. He loved that too. In fact, rather than running straight to the cat bowls to finish what they left behind (his usual routine), he ran to this bowl first! And again, no digestive issues. 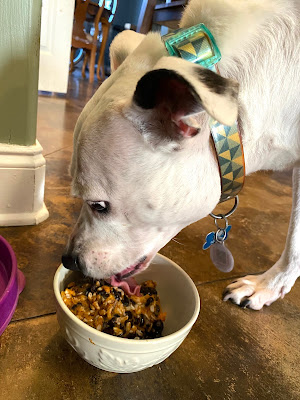 I've been feeding him home-cooked meals for three weeks now, and it's going great! But after reading up on vegan dog diets, I've learned that it's best to either supplement home-cooked meals with vegan dog vitamins (like VegeDog) or include some vegan kibble to make sure they're getting all the necessary nutrients. I have several friends whose dogs have successfully been eating vegan diets for years, and I've read quite a bit on making the transition. 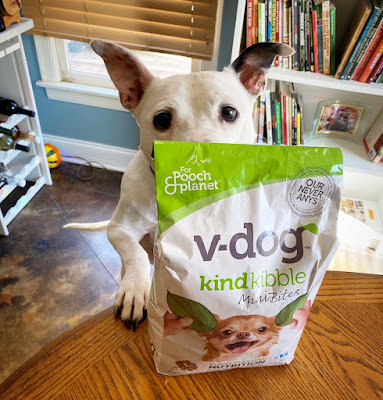 I just ordered a small bag of V-Dog to try! He loves it, and so far, so good. I did have Datsun on V-Dog for a while (before Maynard came along), but back then, I just couldn't afford to keep feeding with that.  It's quite a bit more expensive that storebought dog food, and at the time, I just didn't have the funds. Datsun did well on it though! I ordered the small Mini Bites to test with, but if he does well on this food, I'll order a big 30-pound bag of the kibble for big dogs.
It feels good to know that I'm supporting vegan companies now, and I'm not feeding my dog all the gross 4D meat that's in most non-vegan dog food. It's also nice to know that my household is a little more cruelty-free than before. Now I just need to get Paul on a vegan diet. Ha! I don't believe it's safe to put cats on vegan diets though, so unfortunately, our three cats are still contributing to factory farm cruelty. Little carnivores!
Posted by Bianca at 6:30 PM

PLEASE CHECK WITH A QUALIFIED VETERINARIAN!!!!
Sorry but dogs are carnivores, descended from wolves. 100% Vegan diets do not contain the right nutrition for most dogs. Supplimenting their diet with vegan or vegetarian options is fine. You may have researched this idea but people most put in the effort. They won't serve a balanced nutrition diet to their dog and the dog will suffer from this poor nutrition advice. Please don't encourage people to harm their animals by serving 100% vegan food.

I have a cat with a similar problem and trying to switch her to at least part vegan diet. She responds well to Wysong vegan food. I heard that it is possible to feed vegan food to cats (nutritional yeast is supposed to be good for them). Any thoughts on this?

Although my cats aren't vegan, and I agree it isn't safe for them, one of my cats does enjoy some vegan treats, she loves tofurky deli slices, and also cocowhip!!
Give that big handsome boy a hug from me!!

Gotta agree with Doug ATX here. Plain dairy yogurt usually kills excessive farts. If it continues, ask your vet what type of food to slowly switch to. As he ages, he may need a different formula. I get not wanting to support corporate slaughterhouses. However, as pet owners, we must provide properly for them, for their needs. It’s not about our ideals. We can only choose for ourselves.

I've been reading this blog for years and have always found it really great. But I cannot (will not) support anyone feeding their pet a vegan diet if they aren't an herbivore.

Please, PLEASE check in with a qualified veterinarian to make sure this is the absolute best option for your pup.

Hi everyone who is concerned! We will be talking to our vet on his next check-up, but I have done my research! There's a lot of good info out there about properly planned vegan diets for dogs. V-Dog has been around since 2005, and they've had great success. I've had another dog who did well on V-Dog for some time before I could no longer afford it. But we will check in with the vet on the next visit.

I think we should trust Bianca not to harm her pets in any way! She seems like a smart person who has done her research. I'm sure if her dog isn't doing well in any way, she'll switch him back to meat. Sounds like he's doing great for now.