Imagine Vegan Cafe has been branching out beyond the restaurant with new products that are sold in stores for a couple years now. You can buy their vegan ranch, "honey" mustard, spinach dip, and chess bars in Memphis grocery stores, and the dressings are in vegan-friendly shops all over the country! And now they've added a new store product, Mac & Cheese!!! 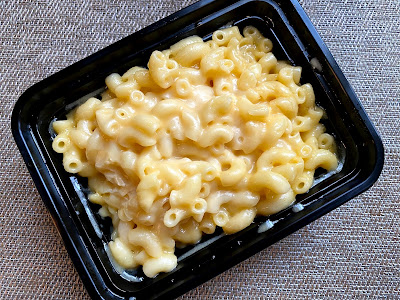 At the restaurant, you can order three kinds of mac — cheddar, white cheese, or mixed mac (that's cheddar and white mixed together) — but this new version sold in stores is a different recipe that's less perishable, so stores can keep it in stock a little longer. Kristie, the owner of Imagine, let me try a free sample, and I AM SOLD, Y'ALL. 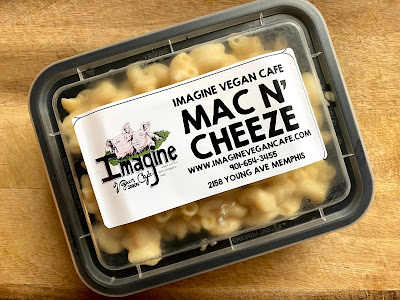 This new mac is so creamy! And you get a pretty big portion in a box. It could make two servings as a side, but I ate it all as my main dish with a small salad on the side. It's solid when cold, but after a couple minutes in the microwave, it gets super creamy. It reminds me a little of that awesome Amy's frozen vegan mac (probably because of the cute plastic tray), but this version has a cheese sauce based from Violife rather than the Daiya in Amy's mac. And Violife is the best cheese!

I mean, would you just take a look at that? DREAMY. 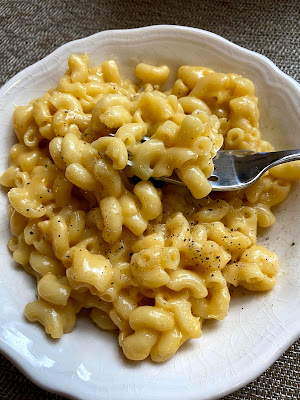 If you're in Memphis, you can find the mac at Curb Market, Super Lo, High Point Grocery, and Miss Cordelia's or in North Mississippi at Coffee Central and Coffee Central Squared. The dressings are available at small vegan-friendly markets across the country and on Vegan Essentials (or you can order on Imagine's website)!

That is one creamy and dreamy looking mac and cheese.

That does looks dreamy and creamy! I love the Amy;s mac so freaking much!!!

Everything Imagine makes is so delicious! Hope Vegan Essentials will carry their mac n cheese. Looks so good. Wish they had some of their recipes available online.