It's been a long, sad couple of months, but my home away from home — Imagine Vegan Cafe — has reopened after an unexpected building maintenance issue put them temporarily out of business. They had some issues with the old pipes in their building, and crews ended up having to tear the floor apart to fix the pipes! So they were closed for about two months.

I usually eat at Imagine once a week (or at least every two weeks), so I've had some serious withdrawal. But their much-anticipated grand reopening was yesterday, and they came back with a BOOM by adding Vegan Mozzarella Sticks back to the menu! 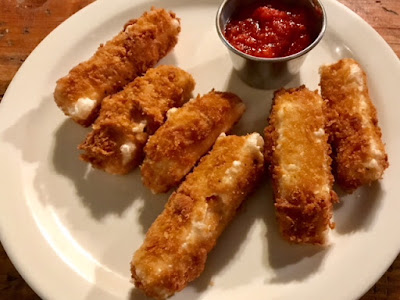 My friends and I went last night for dinner, and I ordered a whole plate of these for myself. I disclosed to the table that I was not sharing, and they'd have to get their own. I did end up "loaning" Pam a cheesestick when her order came out later than everyone else's. But I made her pay me back when she got hers. 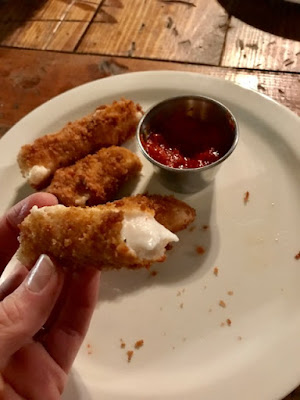 Just look at that gooey cheesiness! Owner Kristie is making these in-house, and they're just perfect. When Imagine originally opened, they had Teese brand cheesesticks, but Teese stopped making them. After that, Kristie would occasionally offer homemade ones on special, but these are back on the regular menu. And I hope they stay that way!

The restaurant was PACKED last night when we were there (and I heard it was slammed all day). People have really missed this place!

To balance out my cheesestick gluttony, I ordered the Fried Chicken Salad with Ranch. Ha! More fried! More junk food! But hey, there were salad greens, right? Imagine makes and bottles their ranch, and I've been hella missing it over these past few months. I probably poured a quarter-cup of ranch on this salad. And I purchased a bottle to take home. 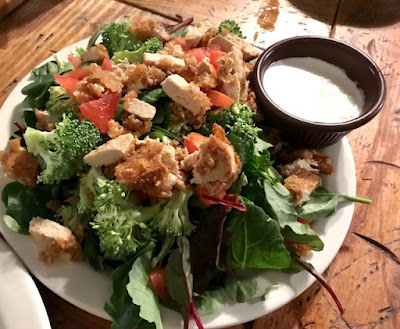 Pam got the Vegan Drumsticks, Mashed Potatoes, and Garlic Kale. She couldn't keep her hands out of plate long enough for me to snap this photo. 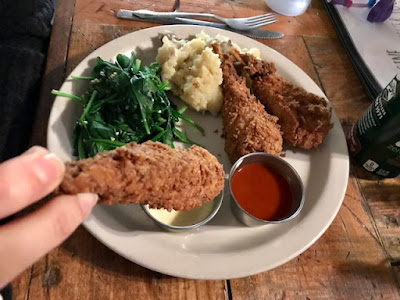 Megan got the Vegan Turkey Cutlets with Gravy, Mac & Cheese, and Collard Greens. 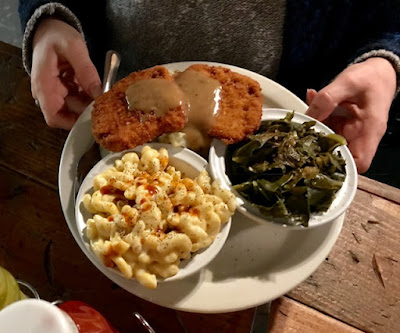 Melissa went with a veggie plate, so I didn't take a pic cause y'all know what veggies look like. Shay was the responsible one who only ordered a side of spinach since she also had a whole order of cheesesticks to herself.

Here's our crew! Megan, Melissa, Shay, and Pam (minus Jennifer and Simon, who'd just finished their dinner and we arrived). 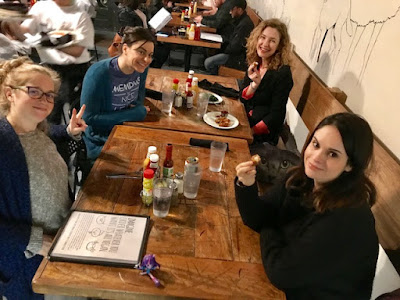 Whatever happened to that retro cookbook you were writing?

I wouldn't share those cheese sticks either! They look amazing!! The mac and cheese looks really nice and cheesy and creamy and the drumsticks look so interesting and realistic! Looks like a great meal and a great time with friends!

Those cheese sticks look incredible! I've always told myself I'm going to make vegan cheese sticks at home but I have a deep fear of deep frying! The food all looks incredible!! I'm so glad they're open again!

HI Rie Chan! It's on the back burner for now! I may work on it again at some point, but I just lost the inspiration/time to work on it. I've developed a ton of recipes though, so I should finish one day. :-)

Those cheese sticks!!
Salad dressing totally makes or breaks a good salad for me- a good vegan ranch is hard to find (or make!) so that’s awesome they sell theirs
Ttrockwood

It all looks so good! But especially those gooey cheese sticks.

Those cheese sticks look amazing! I was never a HUGE fried cheese fan, but it has been so long since I've had any. I wish I could eat one again. One day right?