A few months ago, Paul's brother Donnie and his partner Jackie gifted me with a few beers from their family-run brewery, Sobel's Obscure Brewery, in Pennsylvania. I promised I'd come up with a few vegan recipes using their beers, and I've had a lot of fun with this!

Cooking with beer brings out such a depth of flavor in any dish. Last month, I posted my recipe for Vegan Beer Chili using their S.O.B. Prehistoric Pilsner. A light pilsner is great for chili. This time, I'm adding their S.O.B. Inspirational IPA to my Boozy Baked Beans (recipe below!). Shown here with a kraut-topped veggie dog and vegan potato salad. 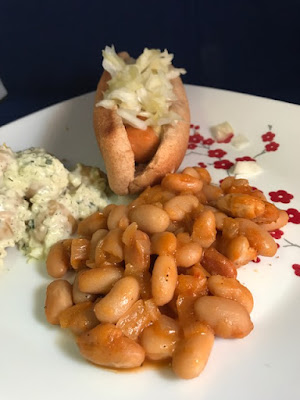 This isn't a new recipe. It's actually printed in my cookbook, Cookin' Crunk. But I've been refining this dish over the years, and I've really come to learn that an IPA works best here. The hops are slightly mellowed by the baking and the addition of ketchup and maple syrup. But you still get that fruitiness that pairs so well with beans. 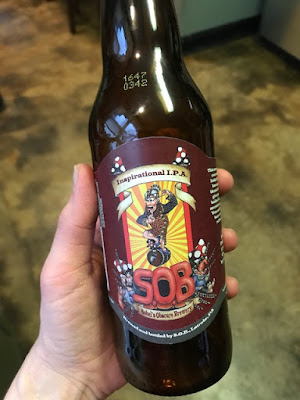 On its own, S.O.B.'s IPA is easy-drinking and mellow with just the right amount of hoppiness. Some breweries go all out with hops, and those beers can be a little harsh, especially to an inexperienced craft beer drinker. But I think S.O.B. finds the perfect balance. By the way, if you're in the Pennsylvania region, check out S.O.B.'s store locator to find it near you. If, like me, you're far, far away from up North and need to try another IPA in this recipe, pick one that's lightly fruity without an over-the-top bitter quality.

Fun fact: This recipe was inspired by my granny. I have a distinct memory of her putting beer in her baked beans when I was a kid, but no one else in my family — including granny — remembers that. That said, when I created this recipe and tasted them the first time, it brought me way back. So either I'm right, and they're all forgetful. Or I dreamed this!

Preheat oven to 400 degrees. Grease a 2-quart casserole dish and set aside.

Cover the casserole dish with aluminum foil and bake for 45 minutes. After 45 minutes, remove the foil and bake uncovered for an additional 15 minutes or until beans are browned around the edges.