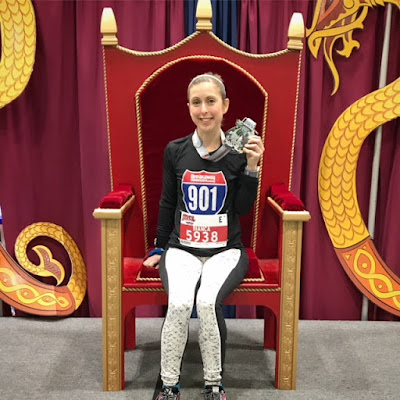 Yesterday, I blogged about what I ate the day before the race. But this post will be a recap with pics of food from race morning and post-race. I woke up at my BFF Sheridan's house at 5 am, got dressed, and had some Maple Brown Sugar Oatmeal with Chocolate Peanut Butter and Coffee. I typically always have oats with nut butter or a bagel half with nut butter. Simple carbs with a little fat to slow digestion and keep me full. 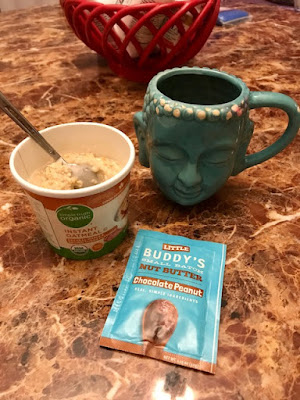 Sheridan woke up super-early to drive me downtown for the race. On a Sunday! She's the best! While I waited near the starting line, I had a banana. And then I hit up the Porta-Potties — a must pre-race! And then we were off! I don't know why, but I was feeling super strong and my pace was about a minute faster than usual (sometimes even two minutes faster!) for the whole 13.1 miles.

The weather was chilly in the 40s, and around mile 5, it started raining. Not super hard, but just enough to make me feel cold again after my body temp had gotten nice and warm. We ran past Diamond Bear Brewery at mile 2, so I had a beer sample early on. And then there was more beer from Stone's Throw Brewery a few miles down the road. Toward the end, there was another beer stop at a brewpub I can't remember, and in mile 9, someone was handing out tiny mimosas. I ALWAYS take any alcohol offered on the course! Also, at mile 9, a woman as handing out little baggies of tater tots. I gratefully took those too. Nothing hits the spot in a race better than a salty tot. As for actual fuel, I had a Hammer Peanut Butter Gel at mile 4 and some Clif Watermelon Chews at mile 8.

After the run, I picked up my amazing medal! Little Rock is known for having some of the best medals in the country. The full marathon medals are massive (mine from last year was 8 pounds and about the size of my head), but the half medals are slightly smaller. Still yet, they're always really cool! Each year, the race has a fun theme, and the medal is designed around that. This year, it was a Monty Python-inspired What's Your Quest? theme. So the medal has glittery dragon, natch. 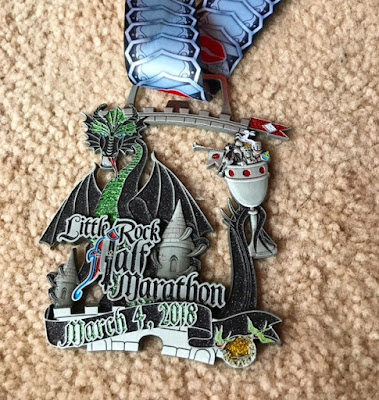 Most races have very little vegan food selections post-race. But Little Rock usually has pasta, and they're happy to serve it vegan-style for anyone who requests it. The Pasta with Marinara they were handing out had cheese mixed in, but I asked them to make me a serving without cheese and they were happy to. There was another vegan next to me in line who did the same. YAY! I also got my two post-race beers (of course!). 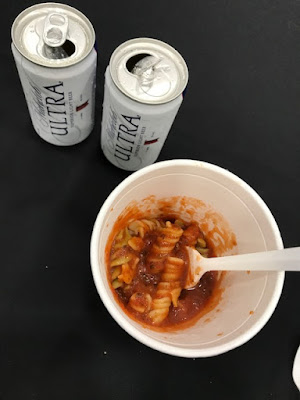 I snacked on beer and pasta at the post-race party, and then I had a Clif Vanilla Almond Builder Bar (20 grams of protein) on the car ride back to Sheridan's place. I showered and then we headed out for lunch at Zaza. This hip, wood-fired pizza and salad joint recently added vegan cheese as an option, but sadly, they were out on Sunday. We made due with two cheeseless pies — the Potato & Peppadew (with lemon, mushrooms, and an olive oil base) and the Forager (with spinach, artichokes, mushrooms, kalamatas, and peppers). Both were excellent, even without vegan cheese! 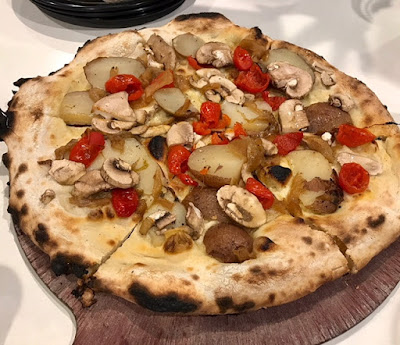 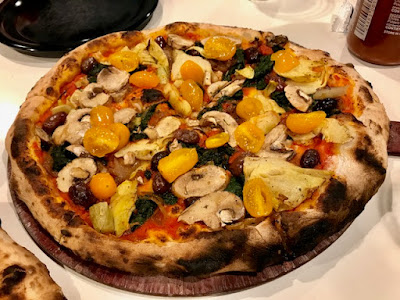 After lunch, I headed back to Memphis — a two-hour drive. When I returned home, it had just started sprinkling, and look — there was a DOUBLE RAINBOW! A lovely way to be greeted upon my return! 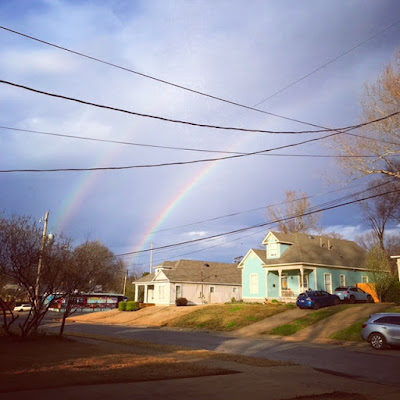 This is one of your best posts. Perhaps I think this, because I so much appreciate.

...and you're making me think that a trip to Little Rock for a race might be in my future. :)

Yay, such an amazing recap and what a great experience! That's so awesome that you were feeling so strong. Tots are definitely the perfect way to refuel during a race, I would definitely be all over that too. The pizzas look awesome too, I love that you always have pizza post race. And I have to agree, that medal is amazing! I seriously love following your running adventures :)

Good job! I would so love to be a runner, but every time I try I get injured ;)

The medal is amazing! And those pizzas look amazing! I want them both!!

The medal is so cool!
Finishing up a race with pizza is an excellent idea.