Yesterday was the first day of Spring! That makes me sooooo happy. Of course, it's unseasonably cold here this week (45 degrees! WTF??), but I know it'll warm up in a few days. And I keep reminding myself that at least I'm not dealing with snow like my friends in the Northeastern US (sorry y'all, that sucks!).

I always celebrate Ostara, the pagan celebration of the Vernal Equinox. Ostara (also known as Eostre) is a fertility goddess who heralds the arrival of Spring. And as you might have guessed, Eostre is the origin of the name for the Christian holiday of Easter. Ostara is also the reason Christians use fertility symbols, like bunnies and eggs, in their holiday fun. Back in the day, when Christians were trying to convert people who practiced ancient religions, much of the old ways were co-opted into the Christian holidays in an effort to convince folks to switch over.

Anyway, history aside, it's nice to get back to the roots of spring celebrations with this ancient Ostara tradition. People typically consume eggs at Ostara to symbolize the earth's fertility, but of course that isn't vegan. So I always make dishes with vegan egg substitutes. This year, I went with the Curried Cauliflower Frittata and Collards & Sausage from Vegan Brunch. Plus, buttered whole wheat toast. 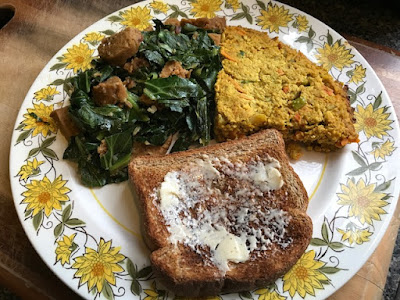 It was so fun to cook from Isa's Vegan Brunch again! I've had this book for years — such a classic. And when it came out, it was one of maybe 20 cookbooks on my shelf (now I'd estimate that I have at least 500), so it got used a lot. Yet somehow, I'd never made this Curried Cauliflower Frittata. It's so simple. Crumbled tofu, sauteed cauliflower, curry powder, and some more spices, pressed into a pie pan and baked. It holds together well for slicing after it's been cooked. 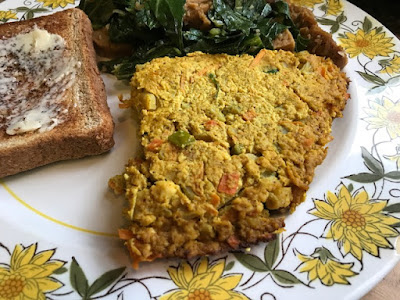 The Collards and Sausage is really great too! I'd made it once before, but it's been so long. The sausage is homemade steamed seitan (I had some in the freezer from another Isa recipe), but you could easily use Tofurky here. The collards are lightly sauteed, rather than cooked to death like we usually do down South. I do love slow-simmered collards that have been cooked for hours, but these were really good too and reminded me more of kale. 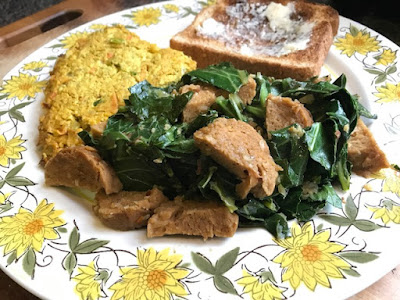 I also had a vegan Vanilla Buttercream Cupcake from Muddy's Bake Shop because it was a holiday, so why not?! This was the last of several I had in my freezer from a few months ago. It thawed beautifully and tasted like a fresh cupcake. 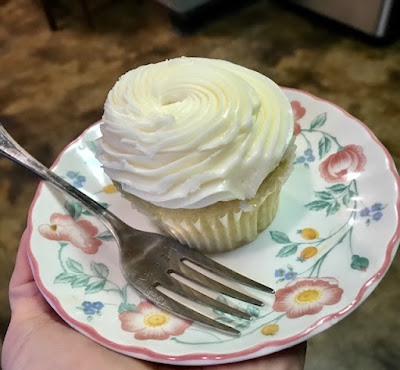 I need to look into vegan frittatas and fast! Not something I have had a lot of, oddly!

I know I say this all the time but I love how you celebrate everything. I love how much you just celebrate life in general and it's honestly really inspiring. The frittata looks amazing and that cupcake! Yum!

I agree with Sarah. I always enjoy your holiday meals and celebrations!
You totally reminded me I love collards so much. I love them in smoothies and soups, and slow cooked sauteed, I just love a collard green!

I’m not a fan of any faux egg products but man do I LOVE tofu in any way shape or form- that recipe sounds so good! I’ll have to play around with using tofu for a baked frittata, I usually just do a scramble of some sort.
I’m impressed the cupcake and the frosting survived freezing, how great to celebrate this way! Hopefully it will encourage real spring to come soon :))
Ttrockwood