Fuel Cafe has been around for years, and they've always been vegan-friendly (and have long boasted the best homemade vegan burger). But this Midtown contemporary American cafe just got more vegan than ever! Fuel has gone through a few menu revamps over the years, and each time, they add more vegan options. Past menus have included vegan grilled cheeses, quinoa chili, vegan TV-style dinners, gourmet bowls, and even vegan root beer floats. But this time, they've truly outdone themselves by adding VEGAN PIZZA.

Fuel closed temporarily over the past few weeks while they installed a pizza oven and concocted a new menu. They hired my friend Don, who, as the leader of Memphis Pizza Cult and the baker of Lulu's Baked, has a bit of a local reputation for being a vegan pizza/cashew cheese wizard. Don makes his own crust from sourdough starter and handcrafts artisan cashew cheeses. Plus, he's got serious pizza topping knowledge.

Fuel reopened today (Tuesday!), but we were invited to the soft opening last night. My friends Susan and Kenzie (Don's wife, aka the First Lady of Pizza) shared a few pies. I ordered the Jason's Temptation Pizza, vegan-style. This has a cream sauce with cashew mozz, potatoes, and dill. 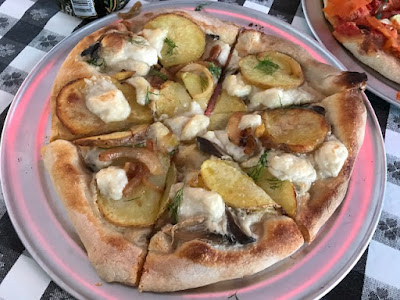 The great thing about Fuel's new menu is most things can be made vegan (and the menu lets you know what to say to sub out for vegan ingredients). Also, many of the sauces — like the cream sauce and mushroom cream for pizzas — are already vegan. This was definitely my fave of the bunch because I think potatoes and cream on pizza cannot be beat.

Susan went with the Carrot Hawaiian Pizza (vegan-style) with carrot ham, cashew mozz, red sauce, and pineapple. Don's carrot ham is simply amazing. He's been using that to stuff inside his Lulu's Baked buns at Saturday farmer's markets, and I'm so glad I can get it on pizza now. 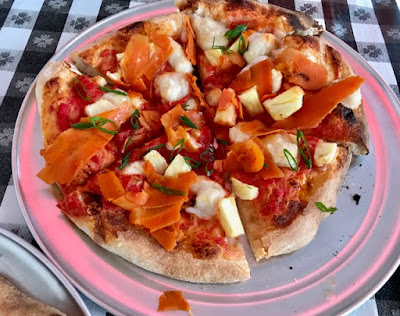 Kenzie got a build-your-own pizza with Beet Pepperoni and Cashew Mozz. I mean, beet pepperoni, y'all! How great is that????! 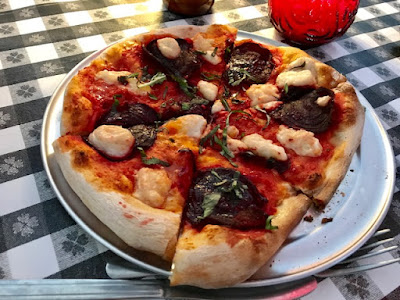 With the build-your-own menu, the vegan combinations are endless. Next time (when I don't have kale-hating Susan with me!), I'm getting a cream sauce base with baby kale and cremini shrooms.

We also got an appetizer to share — Oyster Shrooms with a Vegan Aioli. These were crispy and well-seasoned without being overly oily. LOVED the dipping sauce. 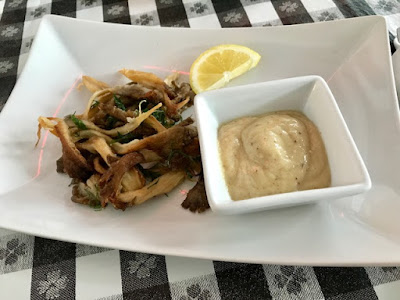 Kenzie got the Caesar-Esque Salad (ordered vegan) with tahini dressing and Don's handcrafted sourdough croutons. I tried a bite, and it was fantastic. 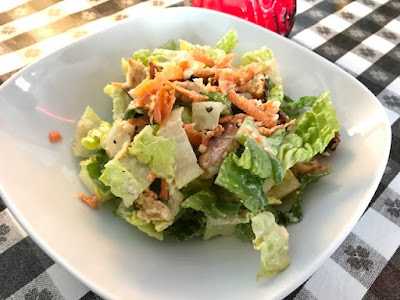 I'm am just tickled to death about this new menu, and this will for sure be my new go-to place for vegan pizza!! Sadly, the veggie burger I mentioned is no longer on the cafe menu, but I hear it's still available on the Fuel food truck, which also happens to serve some killer vegan tacos using their handmade burger.
Posted by Bianca at 9:00 PM

Wow!!! Everything looks so amazing! What an incredibly creative menu! I don't know how I'd ben able to choose!

I agree with Sarah, I would probably still be trying to figure out what to order! Carrot ham sounds amazing. Believe it or not with my total love of potatoes I've never had them on a pizza!!

Pizza is the best and this looks so amazing. The potato dill pizza... wow. The hawaiian with carrot ham... wow. I with I could eat here!