My March Goddess Provisions box is one of my fave boxes so far! But before we dig in, I should mention that I've been a subscriber to Goddess Provisions — a vegan monthly box of mystical and magical supplies — since day one. They're one of my very favorite vegan companies, and I like to feature their boxes in a monthly post. 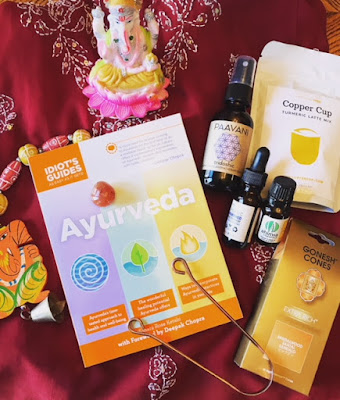 Ayruveda is an ancient Indian system of medicine, which is based on the idea of balance in bodily systems and uses through diet, herbal treatment, and yogic breathing. I've long been interested in Indian culture and actually went vegetarian at age 14 thanks to the influence of my junior high BFF Purvi and her family (they moved to the States from India in the mid-90s). I'm also a big believer that Eastern medicine has stuck around for as long as it has because it works!

That said, I wasn't terribly familiar with Ayruveda, so I was thrilled to have The Idiot's Guide to Ayruveda. I've read several of the Idiot's Guide books, and they really do a great job at breaking things down in simple, easy to digest text. I'm on chapter four already, and I've learned that my dosha (the energies that define my physical makeup) is vata. Now I'm digging into how that effects what I should and shouldn't be eating on the regular to balance my vata energy.

Also in the box was a copper tongue scraper. Tongue scraping is a big thing in Ayruveda, and it's supposed to remove bacteria and prevent bad breath. I've been using it in the mornings after I brush, but it's a little tricky with my tongue ring! 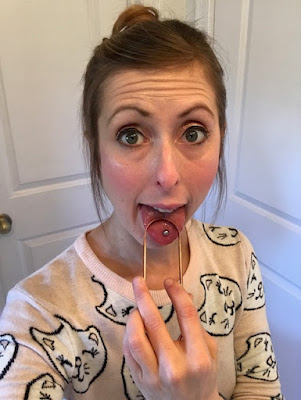 The box also contained Gonesh Sandalwood Incense Cones, which I failed to photograph. But they smell amazing. Long ago, the aforementioned Purvi gifted me a sandalwood pocket mirror from one of her visits to India, and I always loved the way it smelled. Sadly, it's been lost over the years, but this incense took me back.

There was also a Carnelian, a sacral chakra stone that's supposed to be good for balancing pitta dosha (although I'm primarily vata, I do have some pitta traits). I also love carrying carnelian for boosting creativity and helping with goal-setting. 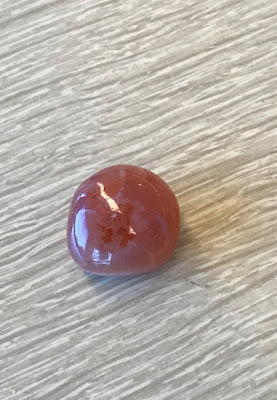 Lots of smell good stuff this month! There's Tridoshic spritzer (a lovely aromatherapy spray that helps balance vata, pitta, and kasha doshas), Balanced Guru Scalp Treatment (which I haven't tried yet, but is said to be good for reviving your tired head after a long day), and Ahimsa Essentials Zen oil blend (a mix of peppermint, lavender, and bergamot – my faves!). 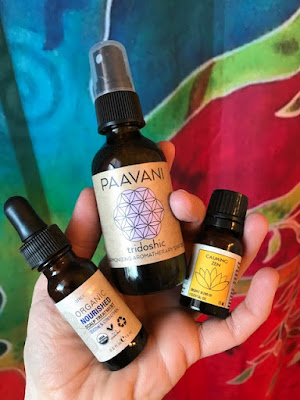 I love the Copper Cup Turmeric Latte Mix! This is a powdered mix with a dried coconut milk base, turmeric, and other spices. It's sweet and warming and delicious paired with hot water, warm almond milk, and agave. 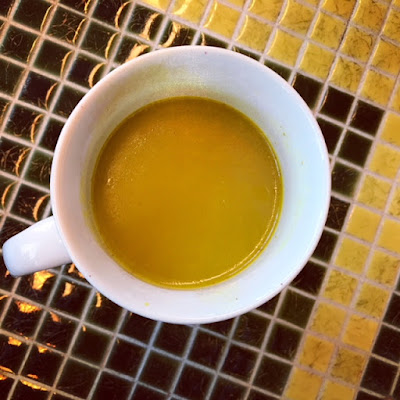 If you're interested in subscribing to the monthly Goddess Provisions box, use this link. I'm an ambassador, so I make a couple bucks from each sale using my link.
Posted by Bianca at 9:00 PM

Ooooh I love this box! I did a little bit of research on Ayurveda in the past and I found it incredibly interesting. The box is curated really well, I really want to try that turmeric latte! I'll have to see where I can find it!

Update: I just ordered samples of the turmeric latte! I can't wait to try it! Thanks for the rec :)

I am a massive fan of Ayurvedic medicine, I used it to help with my gut issues, to which I no longer have. I focused on eating a cold shake based gut booster, due to my stomach and gut being too hot and inflammed. Can't speak more highly of it and this is a great way of getting it to the mainstream.