Last night, we had our second annual Vegan Drinks Holiday Party! Members Jennifer & Simon were super gracious to open their home for the party again this year. Last year, they hosted it as a "help us drink our red wine because we have too much" (is that really a problem??) party. But the group did pretty good damage to their wine stash last year, so this time, we asked guests to bring a dish AND a bottle of wine (or whatever drink they preferred).

Sadly, I failed to take any photos of people! But I did get pics of most of the food. We'll start with Jennifer's AMAZING Big Mac Dip, which I must get her recipe for. It had a base of vegan cheese/special sauce with burger crumbles, onion, and pickles, and it was served with sesame crackers for the full Big Mac bun experience. It seriously tasted like a Big Mac! 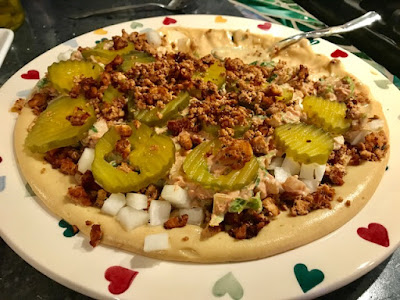 I made Isa's Scalloped Potatoes from The Superfun Times Vegan Holiday Cookbook. The cream of celery in these is made with a cashew cream. Very good! But it took WAY longer in my oven than Isa's recipe said it should. 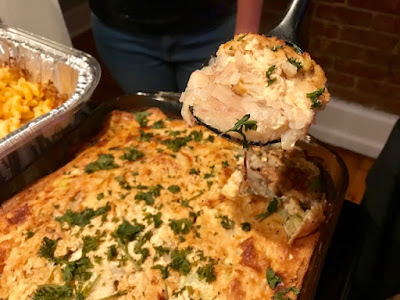 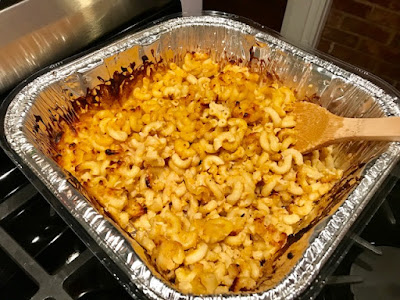 Steven brought something he called Goulash, but it was more of a Buckwheat Kale Pilaf. Very good, very spicy! 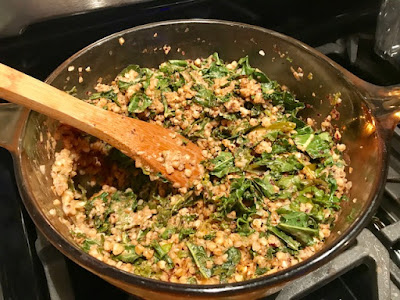 Don (of Lulu's Baked fame) brought a gorgeous and super-delicious Veggie Pot Pie with tofu. Man, this was good. Don is an excellent baker and master of all things pastry. 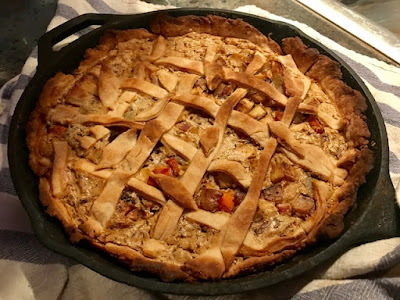 Mike brought Pigs in Blankets with "Honey" Mustard. He used Field Roast apple-maple sausages for these so they were like gourmet pigs! And the honey mustard was made using Bee-Free Honee. 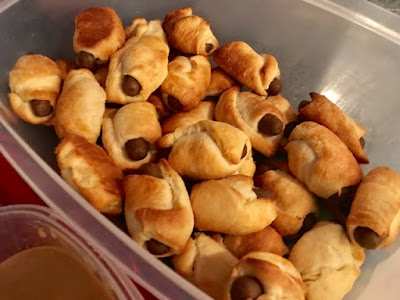 Lara and Markus brought the best damn Caramelized Plantains I've ever had — plus a great mashed potato dish that I failed to photograph. 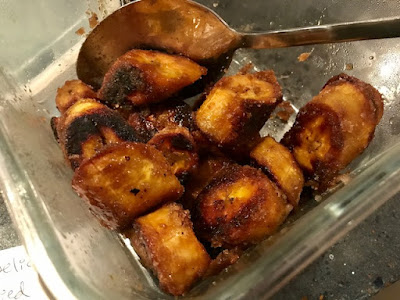 Lara and Markus (or maybe it was the friends they brought with them?) brought these excellent Ginger Molasses Spice Cookies. By the time these arrived, I was stuffed and had to half one with someone else. 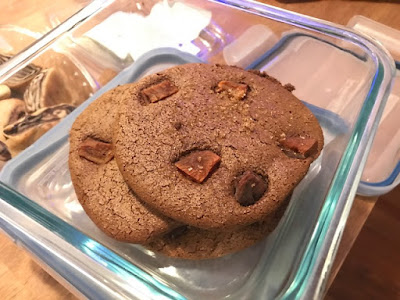 Stephanie brought her awesome Peanut Butter Chocolate No-Bakes, which my family calls Mississippi Mud Cookies. She uses Dutch cocoa in these, and they're extra special. She also brought her new baby, Gus, and everyone was totally stoked to meet him. 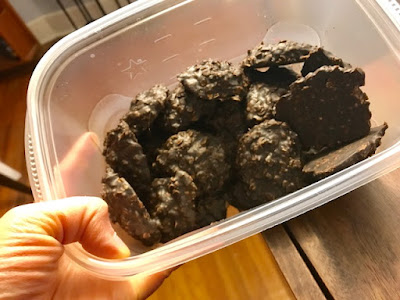 Autumn actually found Vegan Rugelach in the bakery at Kroger! I'd never had rugelach, and I really love it. I'll have to go back and by more just for me! 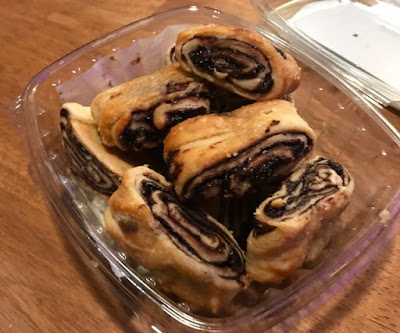 Nicole and Vaughan arrived late and brought a salad, but I was too stuffed to move. And Melissa and Anthony also came late, armed with kettle corn and oatmeal cookies. I did get a bite of a cookie, and we all dug into the popcorn as a late-night snack, despite being so very full!

We had a great time, lots of wine, way too much food, and most importantly, hours of awesome conversation with friends! Yay for vegan holidays!!
Posted by Bianca at 2:29 PM

Everything looks marvy! Sounds like a great time! Your potatoes look awesome, btw!

Everything looks sooooo good!! I so wish we lived closer and could hang and eat with you guys at these events. You all do it right! Can’t wait to see you in a few days for Xmas!

Big Mac dip sounds like something I have needed all my life!! Everything looks really amazing, but that dip is definitely a standout!

I definitely need some Big Mac dip in my life! I hope you can get the recipe.
Everything looks so good.