For the past couple weeks, I've been blogging about what I've been eating to prepare for my third full marathon — the St. Jude Marathon. It's a massive charity raise for St. Jude Children's Research Hospital in Memphis, which treats kids with cancer and other catastrophic diseases (and doesn't charge the families a dime!). This year, they raised more than $10 million from this race! My first full marathon was last year's St. Jude, and then I did a second race, the Little Rock Marathon back in March. On Saturday, I completed the St. Jude Marathon once again! 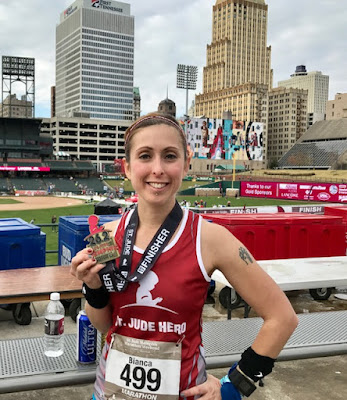 Marathons are HARD for me. I'm a slow runner, a solid back-of-the-packer. I run pretty much the whole way, only taking walk breaks at water stations and a few short walks toward the end when I feel like quitting. But I also stop for selfies and high-fives from friends along the route. I keep doing races because I'm addicted to feeling of accomplishment that comes from running long distances, and, as a crazy Type A person, I'm also probably addicted to the structure of a 16-week training plan and the race day excitement.

My morning started with my usual pre-long run breakfast of an oat cup with nut butter. I had Trader Joe's Strawberry Raspberry Oatmeal with Vanilla Maple Frosting Almond Fluffbutter & Agave. I also had a banana just before the race. 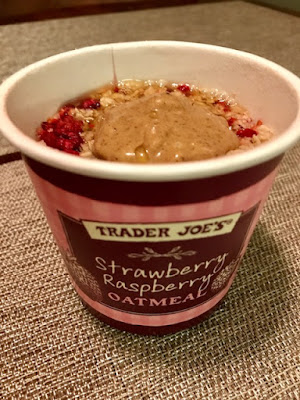 This year, Paul signed up run the St. Jude 5K, so we got to experience the pre-race jitters together! He stood with me in my corral until the race started at 8 am (his race started at 8:50 am). Fortunately, the weather was AMAZING! Sunny and a high of 64. It was pretty chilly when we arrived to the race at 6:30 am though, so I brought some throwaway sweatpants and a pullover (they donate throwaway clothes to charity). I also wore some sleeves that could be rolled down when I warmed up. 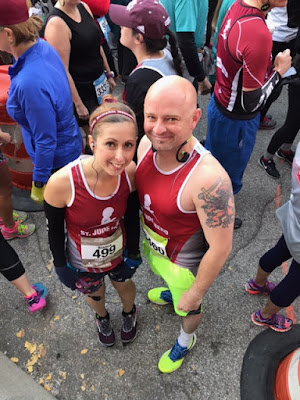 The corrals are released in a wave start, so mine didn't take off until about 8:20 am. I was moving pretty great for the first 12 miles or so — a solid 11:15 to 11:30 per mile (which is fast for me and slow for most people). I did stop at Mile 2 to take a free sample of whiskey from Old Dominick Distillery. They were handing out samples to runners, and it sounded like either a great idea or terrible idea. I took a chance, and turns out it was a great idea! The small bit of liquor helped to calm my early race jitters and propelled me along.

Those first few miles just flew by, and before I knew it, I was at Mile 8, where my fellow board members from the Crosstown Memphis Community Development Corporation had a spirit station. I stopped for a selfie with Donna, who has been playing the drums for runners every year since the race started! Everyone calls her the Drum Lady. 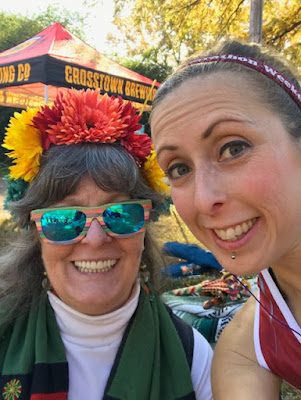 Just a few miles up the road at Mile 12, my co-workers at Crosstown Arts had a spirit station called Cancer is a Drag with drag performances, bloody marys, and vegan blueberry pancakes prepared by Octavia, owner of Midtown Crossing Grill. My co-worker Stacy met me by the barricade and snuck me a few pancakes, which I stuck in a baggie and put in my pocket. Yes, I ran with pancakes in my pocket! Like you do. 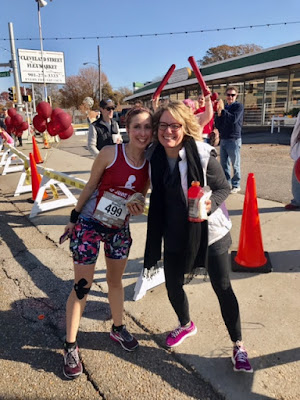 Paul was also at the Crosstown Arts spirit station by then. His 5K was long over (he PR-ed by 2 minutes!!!), and he'd driven home. So he walked from our house to see me pass by. Stacy's husband grabbed a shot of us together there. 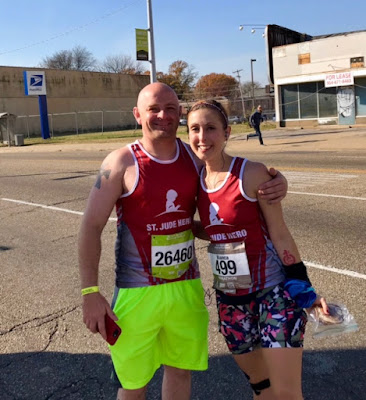 My friend Andy's house is directly on the race course, and I passed by at the end of Mile 12, just after the Crosstown station. Here's me and his friend Tyler! 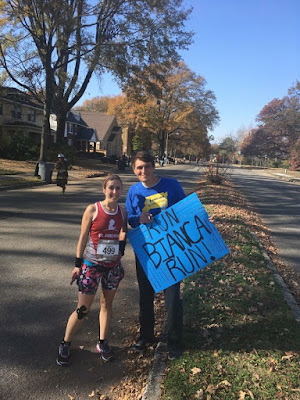 Just a few blocks down from Andy's house, I decided to go ahead and eat one of the pancakes in my pocket! It was sooooo good right then. I typically only eat energy gels and chews during my long runs, but I get sick of super-sweet stuff. The pancake was only lightly sweet from the blueberries. Sadly, I knew that I couldn't stomach more than one mini pancake while running long distance, so I had to ditch the other two pancakes. I was a little worried experimenting with a new food on my run would cause GI distress, but I was okay!

I saw my friend Vaughan at Mile 15, when the race went through Overton Park. I leaned over to pet his dog Shelby, and Vaughan took this weird pic, which totally cut out poor Shelby. Trust me. She's an adorable pup! 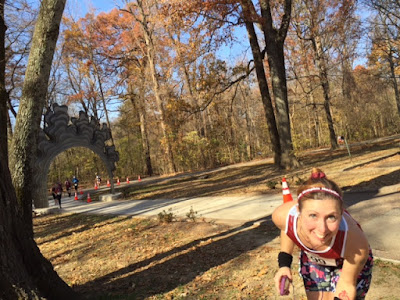 Around Mile 17, my friends Jennifer and Simon met me with a sign (and a roasted, salted potato!). Salted potatoes (or any salty snack) are a godsend that far into a race when the idea of sugar just grosses me out. Jenn & Simon live between Miles 17 and 19, so I saw them again at Mile 19 and got another potato! And just a block away from them, my co-worker Ginger had me a potato and some pretzel rods. SCORE. By the way, I stopped for a pic with Simon and Jennifer. We found a random dude walking down the sidewalk to take this! 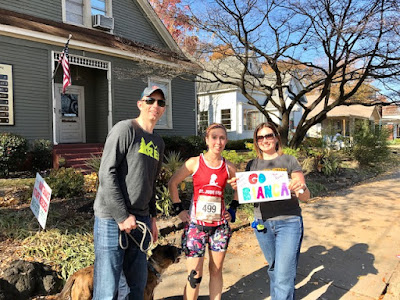 And that was it for friends along the course. The last seven miles were a long, slow slog. There were times that I felt like giving up and times when I got bursts of energy. There were more salted potatoes from strangers. There was a little walking involved. And I got through it all by sheer force of will. My pace slowed down between 12:30 to even 14 minute miles at times. My final time was 5 hours, 46 minutes. That's five minutes slower than last year! I'd hoped to PR, but my main goal was just finishing. My half-marathon times keep improving, but my marathon times keep getting slower. It may have something to do with all my pee stops, snack stops, and selfie stops. But whatever! I like to be comfortable and have fun!

And speaking of fun, I take every bit of beer offered on the course (there were two beer stops during the race), and I make sure to drink both of my well-deserved, post-run beers. I skipped over the free snacks after the race (most weren't vegan anyway), but I took a Micaloeb Ultra and Wiseacre Tiny Bomb. 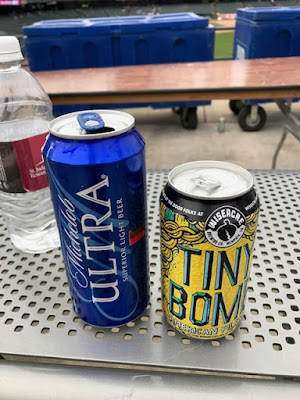 Paul picked me up from the post-race party after I finished my beers. Once at home, I had a No Cow Crunchy Peanut Butter Protein Bar to help with recovery. I'll be doing a full review on these soon! 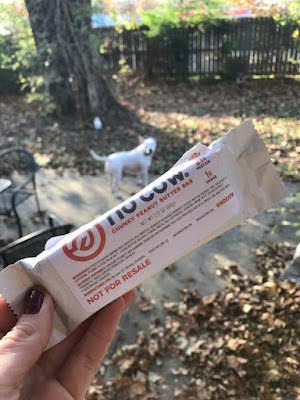 And then Paul and I posed for a pic together with our medals. 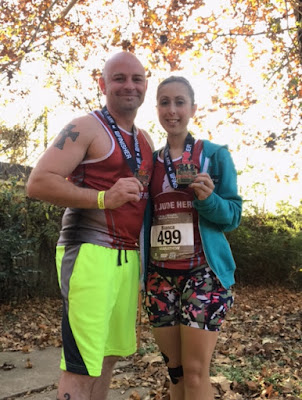 I was pooped! But I'd made post-race pizza party plans with some friends, so I knew I had to shower and get ready for that. I kind of wanted to just sleep forever instead. But I got my act together and met my awesome, supportive buds at Midtown Crossing Grill for vegan pizza. 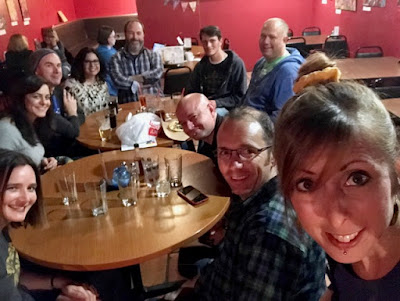 I had a Vegan Vegetable Pizza with potatoes (of course!), spinach, mushrooms, and red onion, plus a couple of beers (Meddlesome Oatmeal Stout and Lazy Magnolia Southern Pecan). SO GOOD. And by the time we were served dinner, I was famished and destroyed this pizza. 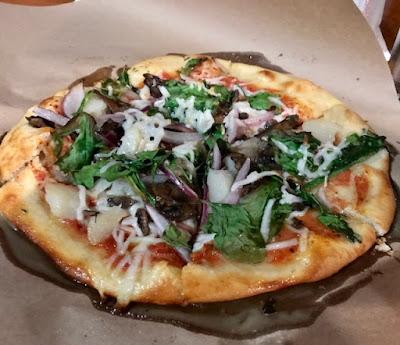 After dinner, Paul and I headed to Wiseacre Brewing Co. so I could try their special-edition marathon beer, the Tarahumara Dry-Hopped Pale Ale. Born to Run by Christopher McDougall is one of my favorite books, and it's all about the native Tarahumara people of northwest Mexico, who are known for their super-fast, long-distance running skills. Love that Wiseacre named a beer after them! 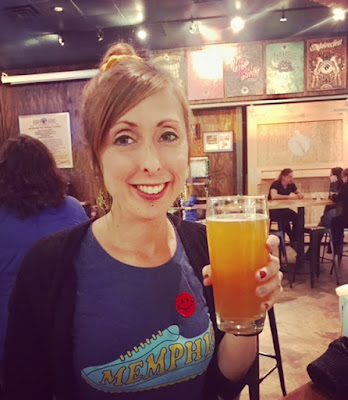 Next, we headed to the Bayou Bar & Grill for a glass of wine with my friends Shara and Mary, and then we tucked in for the night. I slept like a log and didn't set an alarm. Managed to sleep until almost 9 am on Sunday! Win!! And then I spent Sunday taking it easy — watching the Sopranos on DVD, cleaning, blogging, online holiday shopping.

I'm so proud that I've finished yet another marathon. I haven't fully decided what is next, race-wise, but I'm sure I'll have a plan in place soon. I've definitely got some 2018 races on my wish list.
Posted by Bianca at 9:00 PM

You should be super proud, what an amazing achievement!
Though I am chuckling a bit about the whiskey, beer and pancakes during the race! But sounds like you were well sorted for fuel.

Congratulations, Bianca! You do the marathon the right way - HAVING FUN!! Who cares about your time - look at all your friends with signs and snacks and stuff. It's just awesome. I only did 3 half-marathons when I used to run, and although a full marathon was always a dream, I just never believed I could do it. I'm so happy for you accomplishing your goal!

Congrats!! What an amazing accomplishment! I am always so impressed by you. I love that you took these pics with your friends along the route, what a great way to enjoy the run! You are awesome!

So happy you finished the marathon and Paul, too. It's great seeing all the lovely people who support you along the way as well.

I love the way you marathon! It was almost like a friend tour of the town. That's sweet that so many people came out to support you! Congratulations on a big achievement!

Congratulations!! That sounds like it was really tough and intense and you really kicked a$$!
That pizza looks amazing, great post race meal :)
Ttrockwood