It's time for my monthly "unpacking the goddess box" post. But this time, I've got two Goddess Provisions boxes to feature! My December box — themed Solstice Priestess — arrived earlier this week, and I also just received a special edition Tarot Box that wasn't included in my subscription. In case you're not familiar, Goddess Provisions is a subscription box service featuring monthly boxes of crystals, teas, chocolates, candles, and other magical items. I've been a subscriber since day one, and I always devote a post to the boxes. 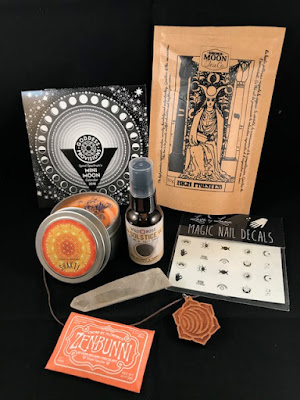 I'm probably most excited about the 2018 moon phase calendar. I typically buy Llewellyn wall calendars, which have the moon phases. But it's nice to see a calendar that JUST has the phases, so you'll always know where you are. 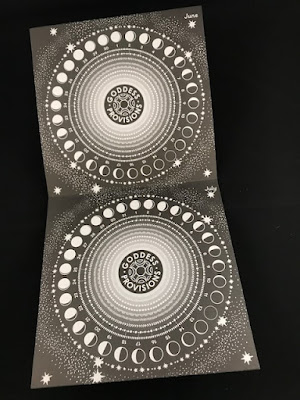 The Love By Luna nail decals are REALLY cool. They feature images of sparkly stars, triple moon symbols, and more. I tried to take a picture of one on my thumb, but my hand just looks crazy. Sorry! 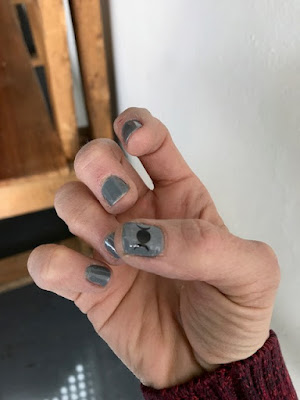 I've been burning the Fire & Bloom Shakti Candle a lot already (as you can see here). It has a lovely scent of lotus, hibiscus, and cornflower. I especially love that it has a little mantra in the lid. 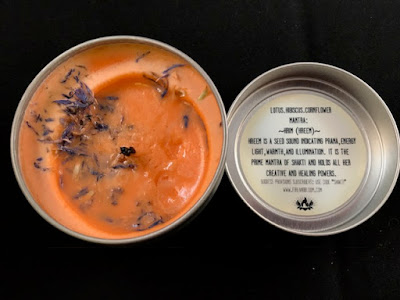 I've also been wearing the Lasertrees Solstice Necklace. It's a gorgeous wood cut featuring a lotus sun co-existing with the phases of the moon — representing the union of light and dark. 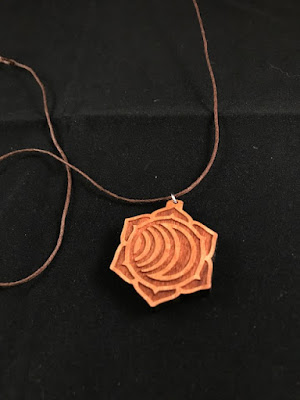 The New Moon Tea Co. High Priestess Tea is a wintry blend of organic spearmint, raspberry leaf, lemon balm, hibiscus, and rosemary to awaken your sense of inner wisdom and highest (which, by the way, ties into the meaning of the High Priestess card in the Tarot). 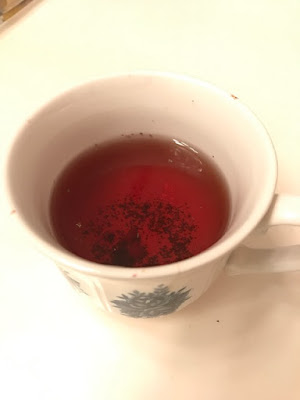 The Wild Rose Herbs Solstice Botanical Salt Spray also has spearmint, along with juniper and chamomile, and it smells like the holidays! The spearmint definitely overpowers the chamomile, so I've been spraying this on in the mornings for an energy boost. 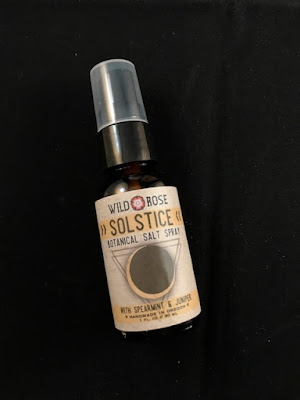 I haven't tried the ZenBunni Chocolate yet, but it's Maui Sunrise flavor with Hawaiian ginger and red turmeric, which sounds like a perfect getaway from the winter cold. There's also a Clear Quatrz Point, which is nice to place over your crown chakra when laying down in meditation. By the way, I've started a morning meditation/Tarot study practice, and it's going pretty great. 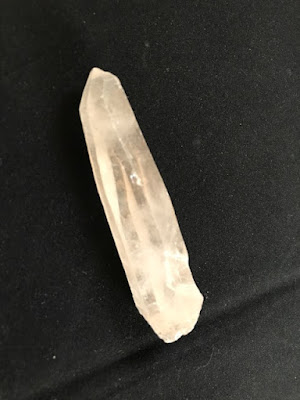 Okay, that's it for the December box. But Goddess Provisions also released a special-edition Tarot Box in late November. I have a number of Tarot decks, both non-traditional (cat Tarot, fairy Tarot, etc.) and traditional (like the Visconti deck). But when I saw this Mystical Mondays deck, I had just had to have it! It's so modern and gorgeous! Plus, the box came with Rainbow Bliss Botanicals Connection to Spirit Tea, a Thunder & Lightning Supply Palmistry pin (already on my jean jacket!), a JaxKelly Moonstone Candle, and Frequency Positivity essential oil. 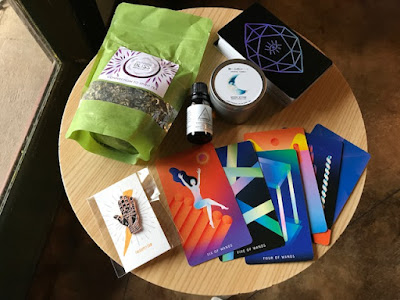 Here's a close-up of some of the Tarot cards. Aren't they lovely? 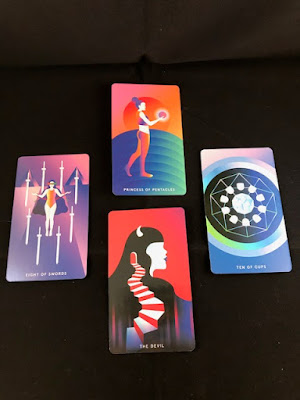 By the way, I'm a Goddess Provisions ambassador, which means I make a couple bucks if anyone signs up using this link. I don't get my boxes free though, just to be clear. I subscribe and pay the $33 a month (the special boxes are $44), and it's totally worth it. It's a great deal, and the boxes are so much fun!
Posted by Bianca at 9:00 PM

Awesome unboxing!!!! One of these days I HOPE to finally jump on board with a monthly subscription of something hahahaha

The candle sounds like my kind of candle! It all sounds lovely actually.