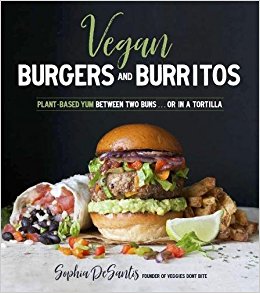 Burgers and burritos. Those are seriously two of my favorite foods, and I am so beyond stoked that there's a new cookbook devoted to vegan versions of BOTH. I mean, burgers and burritos! Together! In one book! How come no one has done this before???

Vegan Burgers and Burritos, a new cookbook by Sophia DeSantis of the Veggies Don't Bite blog, is filled with unique, globally inspired homemade burger patties and burrito fillings. Plus, there is a whole chapter on sauces to be used to dress up meals in a bun or wrap.

I chose to start with a burrito, and it was really hard to pick just one to try first. There are so many great options here — Veggie-Packed Pizza Burritos, Black Bean & Pumpkin Wet Burritos, and Sushi Burritos. There are even fish burritos, which didn't sound terribly appealing to me because I've never been that into sea veggie flavors. But how creative! There's  definitely a burrito in here for everyone, no matter what you're into.

But I settled on the Frito Pie Pouches because I love Frito Chili Pies, and that sounded even better in a burrito. 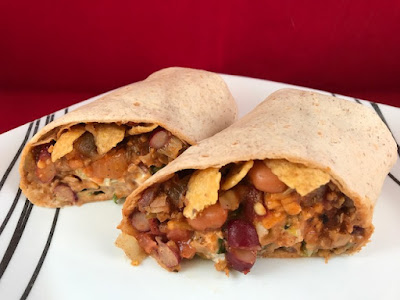 These have a base of homemade chili, and I was blown away by the method used to make it. You soak dry chickpeas overnight and then process into a fine crumble. Those are then used as the "meat" base of the chili, which has added beans, fire-roasted tomatoes, onions, and of course, lots of chili powder. How cool, right?? You put that in a wrap and top with Fritos, sour cream, tomato, lettuce, and onion. There's actually a recipe in the book for a homemade cashew-based sour cream, but I used Tofutti cause I already had some in the fridge. These were a HUGE hit with Paul and I both. Will make again for sure!

For my burger, I chose the I Heart Mushrooms Burger, which is packed with chopped cremini and portabella mushrooms and held together with a base of brown rice. The patties are really meaty for a veggie patty, which makes Paul happy (he only like meaty veggie burgers). The burgers are topped with sauteed mushrooms and onions, and I added some Parmela Creamery aged pepper jack cashew cheese because why not? As a mushroom lover, I really dug these burgers. 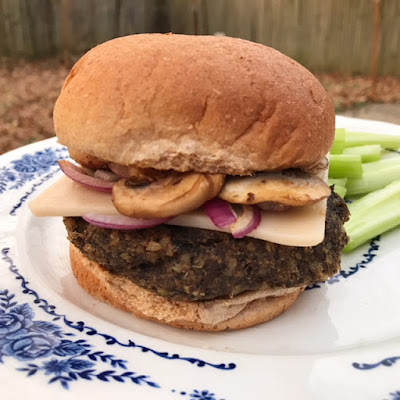 And of course there are more burgers I want to try! The Margarita Pizza Burger, Hawaiian Teriyaki Burger, Thai Peanut Perfection, Down Home BBQ, and the Curry Burger For All are all on my short list.

This book even has dessert burgers and burritos! There's a S'mores Burger with a chocolate bean brownie base and a graham cracker/marshmallow bun. And there's Fully Loaded "Fried" Banana Split served in a tortilla and topped with caramel and chocolates sauces and ice cream.

If you love burgers and burritos (and if you don't, who even ARE you? And why are we friends?), you seriously need this book. I'd say it's definitely in my top five cookbook releases of 2017!
Posted by Bianca at 9:00 PM

Oooh yum!!! I swear, people have the best cookbook ideas! This one sounds so fun and yummy. Both recipes you made sound delicious and please try dessert recipes!!! Those sound amazing!

Sounds like a very fun book! The ground chickpea mince is very clever. I don't think I've seen that anywhere before.

Yup! I added this book to my wishlist! Thanks!

How have I never heard of this book?! That frito pie burrtio makes me hungry!