I'm ALL ABOUT a wrap these days. Like seriously. I want to eat vegan deli meat wraps for every meal right now. Here's one I ate for lunch today with Lightlife Veggie Deli Slices (more on those in a few!), Parmela Creamery Pepper Jack Aged Nut Cheese slices, Trader Joe's Garlic Spread & Dip, homemade chow chow, lettuce, tomato, red onion, and grated carrot. All wrapped up in a whole-wheat burrito-size tortilla. 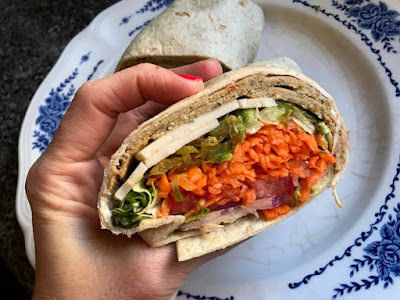 A few months ago, Lightlife sent me free product coupons to review their new Veggie Deli Slices, which come in White Bean & Kale and Chickpea & Red Pepper. Sadly, it takes a long time for new vegan products to come to Memphis, so I finally found these at Whole Foods last week. And I'm in love with them! 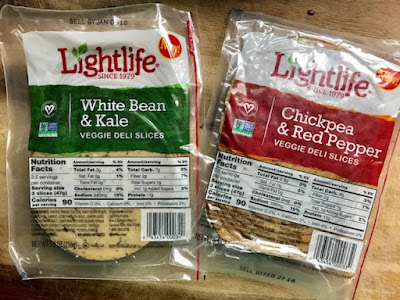 These are seitan-based slices made with real veggies and beans. The ingredient list is filled with things I can pronounce, and they're packed with protein. They have the taste and texture of a nice slice of lunch meat. Even Paul likes them, and I've been sending him to work with sandwiches. He was super-pissed today when he realized a lunch thief had eaten his vegan sandwich at work! I hope whomever it was enjoyed their stolen vegan deli meats! 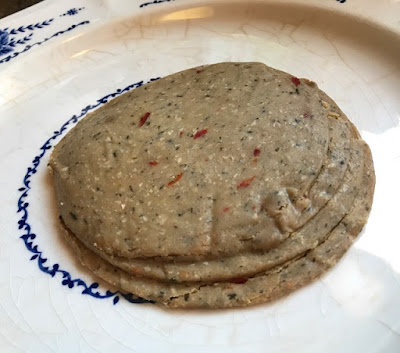 Speaking of sandwiches at work, here's one I had at my office last week (before I re-discovered wraps!). Same Parmela Creamery cheese (it's so good!), lettuce, tomato, and Dijon on Dave's Killer Bread. 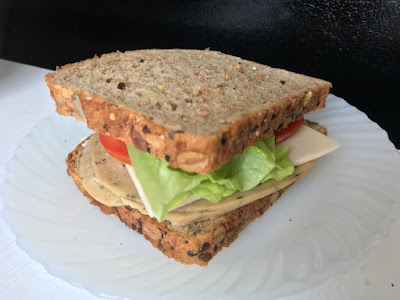 Interesting on the new LightLife Veggie Deli Slices! I remember the old ones - and ones from other companies - I wasn't thrilled with them and honestly couldn't tell you the last time I had a vegan alternative slice on a sandwich or on anything else for that matter. Mostly for 2 main reasons - I never liked meat before I went veg - and I'm not a big salt fan so I find a lot of the slices too salty. What did you think about these new ones? Where they salty or not-so-much!? Just curious! I'd try anything at least once if it's vegan...teehee...

I want to try these so bad! I always see them at Whole Foods. Being gluten free really is a pain! Le sigh. I've always loved wraps too, and yours looks amazing!
Oh, and yay for Paul loving vegan deli slices, and boo for sandwich thieves!

I don't think we get any Lightlife here yet... I might be mistaken. But I really like the sound of the white bean and kale ones.
I am outraged on Paul's behalf that someone stole his sandwich!

I like how they aren't "turkey" or "ham" flavored but something totally different. I think it makes it less "fake" to newbies. I haven't seen these yet.