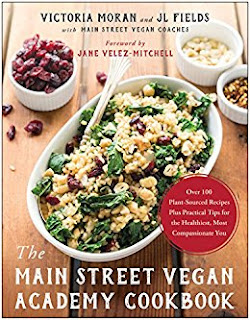 Wouldn't it be cool if there was an academy where you could go and learn all about best practices for helping others go vegan? Like a Hogwarts for Vegan Lifestyle Coaches?

Well, there already is! Victoria Moran has been training and certifying vegan lifestyle coaches and educators at her Main Street Vegan Academy since 2012. Of course I've never been, but it's a bit of a dream for me. I'm not sure I could make a living as a vegan lifestyle coach (and I love the job that I have now!), but I'd still love to attend Victoria's program in New York City one day. Until then, I'll just dream and cook recipes from Victoria's latest book — The Main Street Vegan Academy Cookbook. This new book features recipes from Academy grads, as well as a few chapters debunking common vegan myths and providing practical advice for newbies.

The book is divided into chapters on breakfast, small plates and snacks for sharing, salads, one-pot meals, main dishes, and desserts, as well as a chapter on non-food topics, like vegan fashion, beauty products, etc.

I picked a recipe from the Main Street Mains chapter to celebrate Winter Solstice last week. This Tempeh-Stuffed Acorn Squash was fancy enough to feel celebratory but easy enough for a quick weeknight meal. The recipe actually called for kabocha squash, but Kroger only had acorn. The stuffing is made with tempeh, quinoa, dried cranberries, onion, carrots, and celery. Great winter flavors! 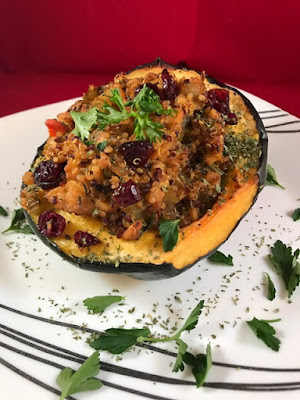 I went to a potluck a few weeks back and wanted to bring something that would be easy to share, so I consulted The Social Vegan chapter and found this Buffalo Chickpea Dip. This has a base of white beans and cashews, and then whole chickpeas, lots of hot sauce, and vegan cheddar are mixed in (and more vegan cheddar goes on top). I served this with tortilla chips for the potluck, and the omnis there all loved it (I was the only vegan at this potluck!). The recipe made a ton, so I had quite a bit leftover. I snacked on this for a few more days, using it as a dip for celery and carrots. So wholesome and delicious. 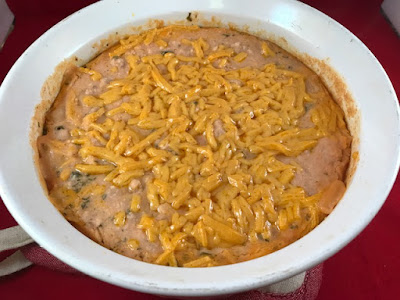 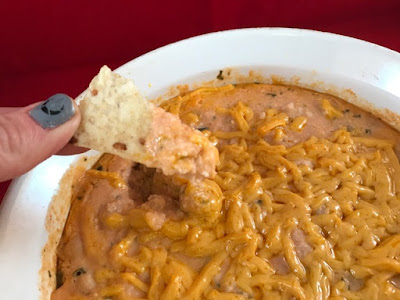 This book is filled with easy and approachable recipes that would appeal to long-time vegans, as well as the veg-curious and newbies. There's a 15-Minute Chili, Veggie Mac (mac & cheeze made with a potato/carrot/cashew base), Roasted Red Pepper Cutlets (like chicken cutlets for vegans!), Thai Green Curry, Lentil Sloppy Joes, Sweet Red Chili Potato Skins, and so much more. There are no less than FOUR recipes for lasagna! And the dessert chapter features everything from healthy chocolate avocado pudding and raw brownies to a decadent chocolate stout beer cake and mocha peanut butter bars.

Lots of new recipes to try

Love this idea for a book! The dishes you made look delicious! I'll definitely have to check this out!

This book is certainly on my wishlist! The recipes you showed here look great!!!! YUM!